Social worker, 45, jailed for nine years after subjecting his own stepchildren to a DECADE of abuse

A social worker who subjected his stepchildren to almost a decade of ‘deliberate and unceasing cruelty’ has been jailed for nearly nine years.

Victor Lindsay, 45, brutally beat and tortured his girlfriend’s three children Leon, Leona, and Cleo, who were aged five, four and two respectively when the attacks began in 1985.

Horrified Judge William Kennedy said Lindsay’s actions represented an ‘extraordinary contradiction’ considering he had worked for many years as a social worker and a youth worker.

The horrific abuse began with Lindsay dangling the youngsters over a high balcony before degenerating into extreme violence.

Each injury was explained away by mother Heather Seraphim while police and social workers did nothing to help the children, Snaresbrook Crown Court heard.

When Cleo was just four years old, Lindsay broke her jaw with a right hook because she failed to stand still with her arms up in a ‘stress position’ he often imposed as a punishment.

She was left without treatment for days until staff at her nursery school noticed her injuries and took her to hospital.

Five months later in January 1989 the little girl, then aged five, was admitted to the same hospital with suspected appendicitis.

‘Man’s inhumanity to man always disappoints, but a man’s deliberate and unceasing cruelty to disadvantaged children repels and sickens’

Surgeons found a 5cm rupture to her bladder caused by her stepdad jumping on her with his full weight when she got a spelling question wrong.

All three children remember being made to run four miles from their home in Hackney to their school in Islington with Lindsay following in his car to make sure they did as they were told.

He would swing punches at Leon for no apparent reason and once threw a plastic plate at Leona, leaving a permanent scar on her face.

On one occasion Lindsay refused to let the youngsters use a bridge to cross the River Lea near their house in Pedro Street and insisted that they waded across.

Only when Cleo was in trouble and seemed on the point of drowning did he get in and rescue her.

The River Lea in Ware: The court heard how Lindsay made one of his daughters wade across the river

All three children reported the abuse to police and social services but were not believed, with social workers even branding Leon a ‘troublemaker’ and sending him to live with family in the Dominican Republic.

Aged just 13, the youngster was told he was going on a two-week holiday then refused any help getting back to the UK.

Lindsay was arrested in October 2010 after all three children reported him to the police.

He denied any wrongdoing until the day of his planned trial in March, when he admitted six counts of child cruelty and two of assault causing grievous bodily harm.

Hackney Social Services as it is today: the judge condemned the service’s actions in the 1980s

Jailing Lindsay for eight years and 11 months, he said: ‘Relatively small incidents of cruelty, for example dangling tiny children over a high balcony so that they feared they might fall, began as soon as you joined the household.

‘These quickly degenerated into physical violence, where each child was hit with objects such as coat hangers, punched and kicked on what seemed to them to be a daily basis for no reason at all.

‘By way of further example, you from time to time dragged Cleo round by her hair and you ground Leon’s head with your fist.

‘So many acts of cruelty, all against youngsters in your care and who should have been able to look to you for protection against the ordinary dangers of young life, were visited upon them by you on a daily basis.

‘Every injury was explained away by you and the children’s mother. The Hackney Social Services Department at that time seems to have been entirely ineffectual.

‘Cleo was made the subject of a care order, and although she complained of assault by you, was eventually returned to you and her mother.

‘Leona ran away from home to escape the violence, but was returned there despite having told police officers of repeated assaults.

‘Reports made to police officers were uninvestigated, despite an unceasing tide of injury and complaint.

‘Man’s inhumanity to man always disappoints, but a man’s deliberate and unceasing cruelty to disadvantaged children repels and sickens.

‘The fact you have spent many years as a social worker, both in residential establishments and as a youth worker, represents an extraordinary contradiction.’

The court heard Lindsay had been abused as a child and had gone on a domestic violence education programme when convicted of assaulting Ms Seraphim in 1997.

Blogging In Jersey Could Be Bad For Your Health.

Prolific local Blogger and campaigner for justice IAN EVANS, two days ago, at the age of 48 suffered a Heart Attack and will now be laying in a hospital in Oxford.
Ian has fought against, what a growing number of people believe to be, a corrupt and politicised Judicial System here in Jersey for some 17  years or so now. Last Friday 30th March 2011 he took a bad turn at work, got himself to the Hospital, where it turns out, he has suffered a  Heart Attack.
We were able to get an interview with Ian today in the Jersey General  Hospital before he was due to be flown out to Oxford an hour or so  later. In the interview we discuss his recent arrest and its  similarities to the arrest of Former Health Minister Stuart Syvret. We  discuss the alleged doctoring of trial tapes, how a supposed flood  allegedly destroyed evidence that might have proven Ian’s case against  the Jersey Regime.
It can’t be said that all the claimed intimidation and oppression that  Ian has said to have suffered at the hands of “The Jersey Way” is fully  responsible for his Heart Attack but one would be foolish to believe it  has not been a contributory factor. Why did the police arrest him weeks  after the alleged offence of contempt of court instead of asking him to  go down to the Police Station? Why after more than three weeks of his  house being searched will the police not give him back his phone, or  sim-card that he relies on for his livelihood? What does “not in the  public interest” mean? Again we are left with more questions than  answers. Have we got a politicised police force and Judicial System? Is  our government going to wear down and crush those who question them?  Should the UK intervene and restore good governance and the rule of law  in Jersey?
Ian vows to fight on……Is this a wise decision or should all us  Jersey Bloggers who want a fit for purpose government, media or a  Judicial System that is their to protect us rather than oppress us give  up now before we find ourselves laying in a Hospital bed, or even worse, a slab in the Morgue?
Link
http://voiceforchildren.blogspot.co.uk/2012/04/blogging-in-jersey-could-be-bad-for.html
##############################################

Maurice sends these docs from Cardiff prison, where he has begun another hunger stike beginning Monday 26 March:

Ever since last September when Tottenham police relied on South Wales police forensic evidence to successfully have me sectioned under the 1983 Mental Health Act I have been refused access to any Crown court for a bail application.

Cardiff’s Crown Prosecution Service refuses to disclose its purported preparation of a so-called “Restraining Order” the “Breaching” of which they all say is why I am to be incarcerated.
My “Remand Warrant” reads “Mental Health issues” while the “Legal Manager” writes: “Notes taken during the course of proceedings are for the use of the court only”!

I have my already ridiculously restricted access to a telephone further curtailed by my Mckenzie friends pin numbers removed, blocked access to writing cheques or further photocopying

Despite lsat weeks High Court order in England that I should receive proper independant attention I am refused.

Its 8 March 2012 letter extract:
“Complaints are considered and responded to in  {?}  stages entirely within establishments”
My account for why my applications in writing have been completely ignored should it embarass those who wish to continue their battle in automomy. 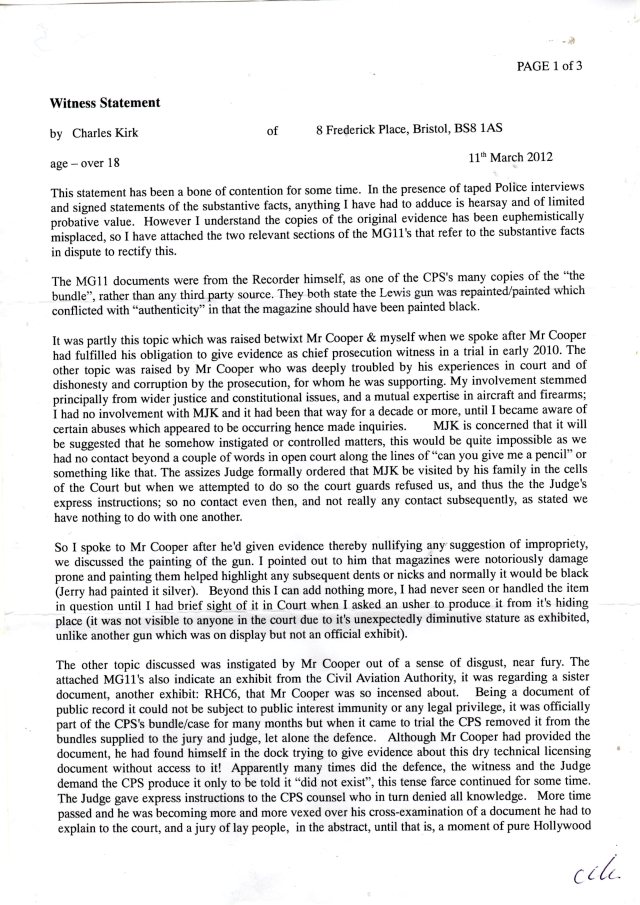