Maurice Kirk {left}, with the appallingly persecuted Musa parents from Nigeria who have had 7 children seized by a dubious London council. Pic taken outside the Royal Courts of Justice, London, September 2011. Court injunctions forbid the truth coming out about the Musa case – Musa family supporter Maurice Kirk being permanently banned forever from having any contact with these 2 innocent Nigerian nationals who have been on remand in prison since Nov. 31 last year by order of the UK state.

I am having difficulty sending this on the more direct e-mail to
Cardiff I require some proof the IPCC have received this today.

I need to send documents to support but as my website is currently
dedicated to this matter could some one indicate if any further
documents are indeed needed in the light of the police conduct
indicated in their enclosed 1st June 2012 letter? 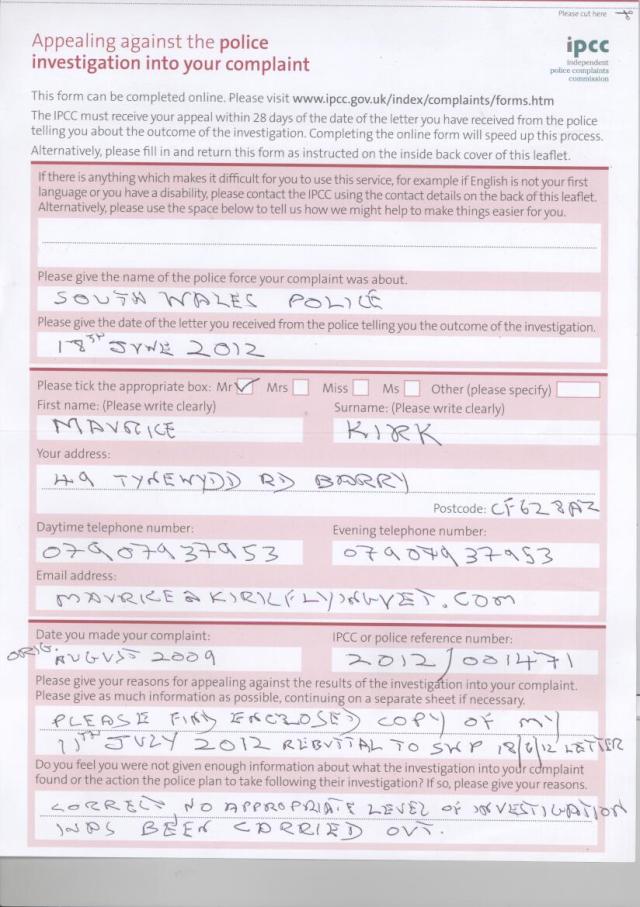 1. The police letter exudes bias in many paragraphs and quite erroneous about their conduct.

3. The gun was used to have me remanded in custody for nearly eight months.

4. Used to have me imprisoned under Section 35 of the 1983 Mental Health Act.

5. Police have not even re interviewed the owners despite their new August 2011 statements!

South Wales Police accept in their original August 2009 gathered evidence that the new owner had painted the black gun to part silver immediately after their 2008 purchase from me.

The police then returned the gun, after my 2010 successful trial, even in a different shade of silver!

I had sold the gun as ‘all black’ just as the gun was then presented in my 2010 jury trial and in my August 2008 U Tube video, also shown the jury, having been filmed an hour before it was collected.

The same video can be seen on http://www.kirkflyingvet.com as used by the police for the Cardiff trial.

6. The ‘investigation’ was wholly disproportionate because:

b) I was registered MAPPA level 3 at level 3 management, meaning 24/7 armed surveillance

d) allowed the police to ask His Honour Judge Neil Bidder QC, on 2

December 2009 (transcript available), I be further sectioned under the 1983 Act in order I be further incarcerated to Ashworth high security psychiatric hospital, IPP, meaning possibly for life

e) Inspector Richard Holder continues to refuse to let me finish or even give me copy of my part written signed witness statement, for the IPCC, I made in Cardiff prison on 7

February 2012 in the presence of his colleague, Inspector King.

f) Aircraft mechanics, when I owned it, Civil Aviation Authority and Lincolnshire museum licenced mechanics, all state it was decommissioned and that the barrel was blocked.

7. The police admit firing the gun only after the new owner’s August 09 statement that it was blocked when the police took possession of it on 22

8. Since this IPCC inquiry started solicitors for the police have only, this month, now disclosed but only by a court order from an English court, all previous orders from Cardiff courts having been ignored, that my arrest had been instigated by Dolmans, solicitors, defending in a 20 year running civil damages claim for numerous other malicious and failed prosecutions.

9. Since this IPCC complaint was registered I have established that seven MAPPA monthly meetings were only conducted within the knowledge of police and NHS (Wales) staff at Caswell Clinic, Glanrhyd Hospital, Bridgend. All documents proving these facts are available.

10. A policy to ‘having me shot’ was the only reason to delay my arrest for well over three weeks and is recorded in the leaked MAPPA minutes and original executive summaries of this conspiracy to again pervert the course of justice.

11. ‘Foxy’ was the name given at the 2010 Cardiff Crown Court trial to the anonymous screened off male police officer I was denied, as with others, to properly cross examine.

He pretended to be the officer who telephoned each time when attempting to purchase the machine gun. He knew, full well, it had been advertised on my web site for almost ten years and had been sold a year earlier!

Female police communication to me included a telephone call to my then wife, Kirstie Kirk.

The police have not even interviewed Kirstie Kirk following my current allegations to the IPCC.

Police refused to disclose evidence recorded during her original interrogation, during ‘Operation Chalice’, for the machine gun coinciding with ‘Operation Orchid’, the latter being to coerce her into signing a witness statement that I had a history of mental health issues.

tJune 2009 discussions at the clandestine MAPPA meeting at Barry police station with only police and Caswell Clinic staff in attendance.

12. The August 2010 MAPPA ‘Executive Summary’, of the so far disclosed MAPPA meetings, was only written following my paid for application before His honour Judge Seys Llewellyn QC.

th June 2009 minutes, leaked from Caswell Clinic, the document clearly indicates I would be shot should I again approach Barbara Wilding, the then Chief Constable, as I had done following her 26th

February 2009 now proven to be false sworn affidavit on disclosure.

14. Crown Prosecution Service advice was recorded in the minutes to the effect that my intentions to expedite the ‘mutual exchange’ of witness statements, in the on-going civil trial, appeared legitimate. Dolmans, solicitors, it was disclosed, were giving contrary advice.

15. His Honour Judge Seys Llewellyn QC’s refusal to order further disclosure of the monthly minutes he confirmed only yesterday in that his responsibilities were only for the civil action.

16. My private prosecution applications, except via Bristol, in anticipation of the usual negative response by those ultimately responsible, have also been blocked in all the criminal courts.