UPDATE August 2012 – an official brain scan done by the government recently proves M Kirk has no brain tumour, and never had. As I write 15 Sept. 2012 Maurice is imprisoned in Cardiff prison since 30 Aug 12, yet again on the most dubious of charges, due for a Plea and Case Management Hearing on Nov. 8 2012.

With certain relief I have an all clear and just jotted down the following to nail a rogue judicial system and corrupt South Wales Police doctor once and for all but I am not holding my breath, knowing the widespread corruption in their legal trade financed by the unsuspecting tax payer…..

My enclosed letter indicates there are serious failed disclosure issues yet to be addressed by both the Cardiff Crown Court and Cardiff Magistrates before progress.

I only now discover there were clandestine orders from a Cardiff High Court judge, influencing the 2011 Magistrates hearing still refused me. I enclose the proof.

Both The CPS and Cardiff Magistrates have now, this month, reversed their previous, by statements in both courts, of having various draft ‘restraining Orders’, only shown to me, leading up to the typed and signed 1st Dec11 official document NEVER  served.

Meirion was my Mackensie Friend in the dock and and saw it all!

10. The result of this scandalously overdue brain scan with expert reports indicate, yet again, the 2009 rogue South Wales Police psychiatrist, ‘victim’ of my ‘harassment’when not, my actions were to prevent further acts of crime (see 1997 Prevention of Harassment Act), was neither qualified to diagnose ‘significant brain damage’and a brain cancer and was a liar on oath before numerous MAPPA and Crown Courts, eg:

11. I will ring concerning your 3rdJuly 12 letter stated as sent to me but not yet traced.

Amongst the many victims out there; there are many ‘so called victims and so called friends thereof’ who are so delusional that they are the real turkeys who would vote for Christmas if so ‘directed to’.

The Truth Will Out. And those with clean hands will prevail.

Good news that there is nothing wrong with your brain then, unless of course you happen to be a corrupt judge, cps barrister or psychiatrist!

Where does this leave the “Cardiff HM Partnership Cabal,”  who did believe, and acted upon false pretence that there was something wrong with your brain?

How many other victims have fallen foul of a corrupt judge, cps barrister or psychiatrist!

Pingback from  Your Chance to Complain to the Commission on Banking Standards! &laquo; Victims Unite!

Rathe ‘off subject’ there Victims unite – how many ‘talking shops’ must there be – how many have there been …? Hasn’t the grass has grown very long over the years with hot air being the only actual result?

“As some wondered what would be the reaction to the news of Maurices’ second brainscan, he received a call from the South Wales Police who wanted to talk to him.

He duly went to Barry police station on Tuesday afternoon and was promptly arrested on suspicion of breaking a restraining order.

We can only wait and see what evidence they have of this latest alleged transgression.”

See other posts on this blog, inc. “Complaint against South Wales police”:  https://butlincat.wordpress.com/2012/07/12/maurice-kirk-complaint-against-south-wales-police/ – and others. 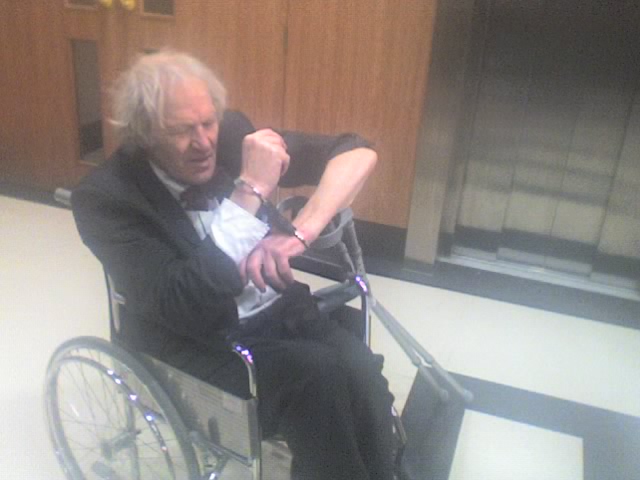 above: Maurice Kirk in Cardiff prison earlier in 2012, there for supposedly “breach of restraining order”.