Posted on June 18, 2013 by butlincat
1. Not wishing to confuse or apply to the court way ‘out of time; I include a statement found last night, (along with ones from my then wife not being submitted unless wanted), as is it is a more legible version of G Thomas (1st Action 8. 13 stolen motor cycle)
2. I enclose a 16th June 13 Claimant letter to the Defendant indicating clear evidence of continuing police misfeasance. 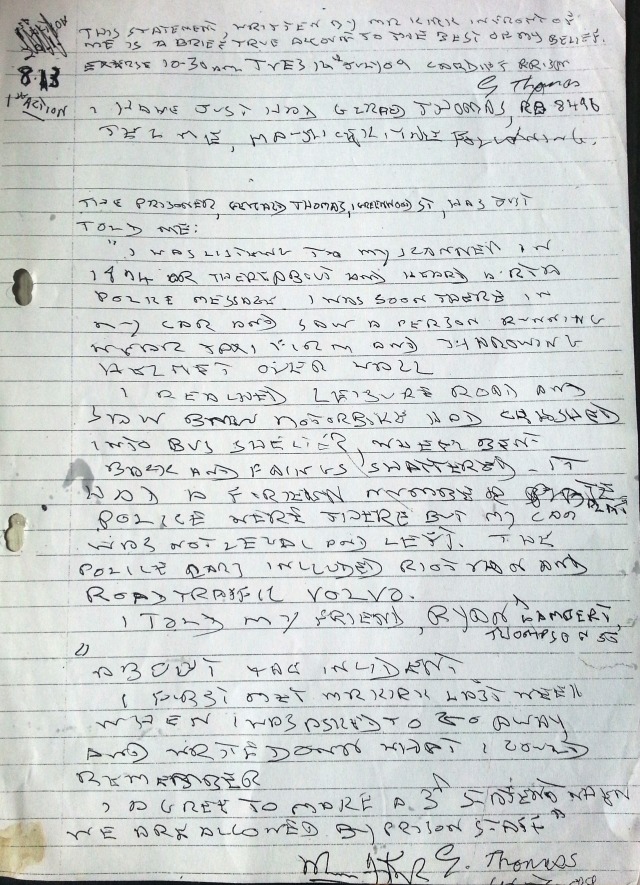 I have now had a number of articles, including my post, stolen from my Cardiff flat.

I keep the flat locked at all times when I am not there and there is a very short list of those with duplicate keys.

Would this relate to your officers failing to recover stolen articles from my car, the week before last or allow me to identify the culprit who broke into my car, outside the flat, by my viewing the CCTV?

Does this relate to anything over a short conversation I had, only this week with a neighbour, over my having been reported for ‘fraud’, apparently and also ‘deception’ but possibly explaining why police had to attend for over an hour and requiring a ‘paddy wagon’?

Could this also relate to the ongoing civil damages claims, in Cardiff County Court, against you and the pending other one million pound damages claims, on malicious prosecutions, some being relisted later this week? They include the strange case over some old WW1 machine gun attached to a replica WWI biplane and another over covering up NHS (Wales) staff re a police psychiatrist?

What are your intentions, please?