Here is Maurice Kirks latest letter received yesterday Sat. 27 Oct. 13. As you can read once again he is being given a hard time whilst in Cardiff prison. He doesn’t even know why hes there, and is being denied even the most basic of things inmates are allowed to receive – like he is being denied visits from solicitors, and friends. This is highly illegal. Also he is being denied mundane things like use of the photocopier, and his car is parked in a public place yet they will not allow him his car keys so he can get it moved, meaning the police will just tow it away to a compound and hell have to pay an extortionate fee to get it back, if at all, if he ever gets out, that is. They’ve been trying to lock him up permanently – forever – for years. What he has suffered by being targetted by these ruthless ne’er-do-wells in the Welsh system is outrageous – and its because hes been targeted all has to be covered up by his being incarcerated forever, which has been their plan for years. It wouldn’t be so bad but this man has not committed any crimes in the first place, except, and its not a crime, he has stood up to their tyranny. MK used to be a vet until they took his licence from him, as part and parcel of fictitious charges against him. How cruel is that? He did nothing to have his caring for animals removed. And they locked him up for 8 months in an asylum claiming he had a brain tumour and was a danger to the public. Kirk has spent years making it known there was no brain tumour in the first place, and all evidence against him was fabricated by a certain doctor who has the protection of the authorities in Wales. This case sucks so much it is truly remarkable. Read MK’s archive posts here: http://www.kirkflyingvet.com and see a fuller picture of how they’ve unashamedly broken this innocent 70 year old mans life to pieces in order to protect themselves, at the taxpayers expense. It is truly a public scandal and it is still going on today with Maurice Kirk, who has been imprisoned on remand 4 times already within the past few months having committed no crime whatsoever other than to upset a few high-ups in Wales who shouldn’t even be where they are in the first place, judging by whats gone on!!! 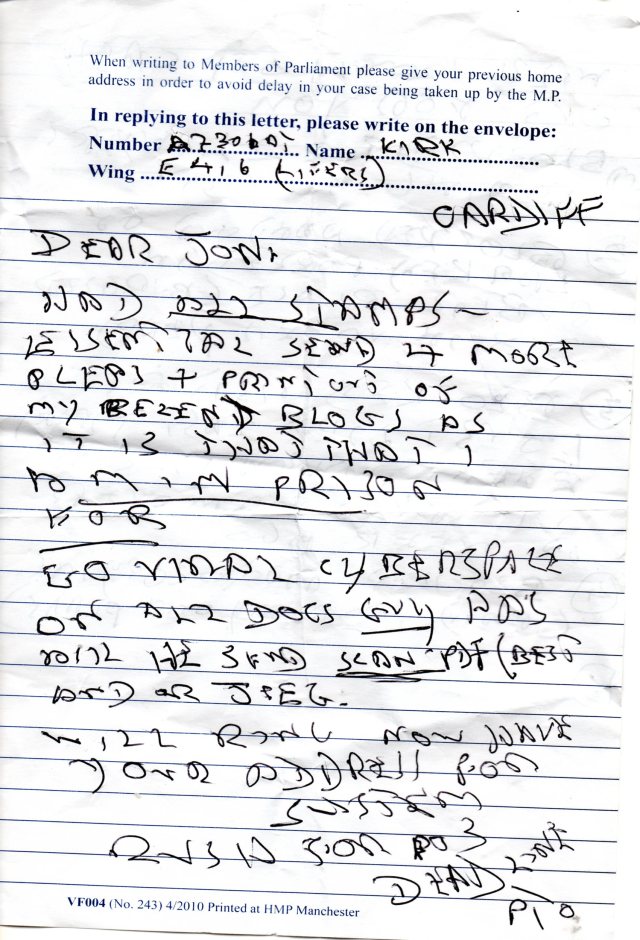 my blog: http://www.butlincat.blogspot.com http://www.youtube.com/butlincat http://www.twitter.com/butlincat
View all posts by butlincat →
This entry was posted in Uncategorized and tagged maurice kirk writes cardiff prison. Bookmark the permalink.