This morning Weds 27 Nov. 13 I received these disturbing letters from Maurice Kirk. It seems the police are still ignoring his approaches to them after being assaulted by the warder already named, and also appropriate medication is being denied M Kirk, who is unable to leave his cell we are told, due to injuries received. It is truly disgraceful what these public servants are getting away with:

Text of the below official prison complaint form:

1] 8 days of complaining in all known other ways have proved futile
2] At 01.15 hrs. I told prison officer JENKINS through a crack in my door I wanted the police and medical attention because:
1] I had been assaulted by an officer
2] my house had been burgled
3] my car had reason to believe had been burgled
4] I had exhausted all known procedur es all week – reply: “contact your brief”

3] Refused any medication – ignored
1] since being assaulted 8 days ago appropriate conduits of complaint for a Litigant in Person have been refused with not even Healthcare attention, this being my 17th application since 16 October 2012 for police intervention when started by apparent theft of my car keys, passport and subsequent
legal papers
2] my blocked Recorded Delivery post I believe is also unlawful
3] Request copies of all Comp. 1 and Comp. 2 forms I have delivered this year.
Thank you.

Confirm in writing, IAN CROSS HM GOVERNOR of this British prison, was correctly informed and when.

1] This issue is worrying in that I was diagnosed in 2009 with brain damage sufficient enough to prevent my cross-examining witnesses appropriately.

3] I was due in court today on this matter but owing to me being rigourously assaulted receiving a kick to the leg, my bail application has, I assume, been adjourned

4] My other worry is that with the new evidence, referred to in Dr. TEGWYN WILLIAMS 30th September 2009 opinion to coincide with HM Crown Prosecution informing the judge I may have cancer when noone from Caswell Clinic will explain?

5] HMP Cardiff boked a follow-up brain scan by Dr. Derby but then surprisingly cancelled with no explanation 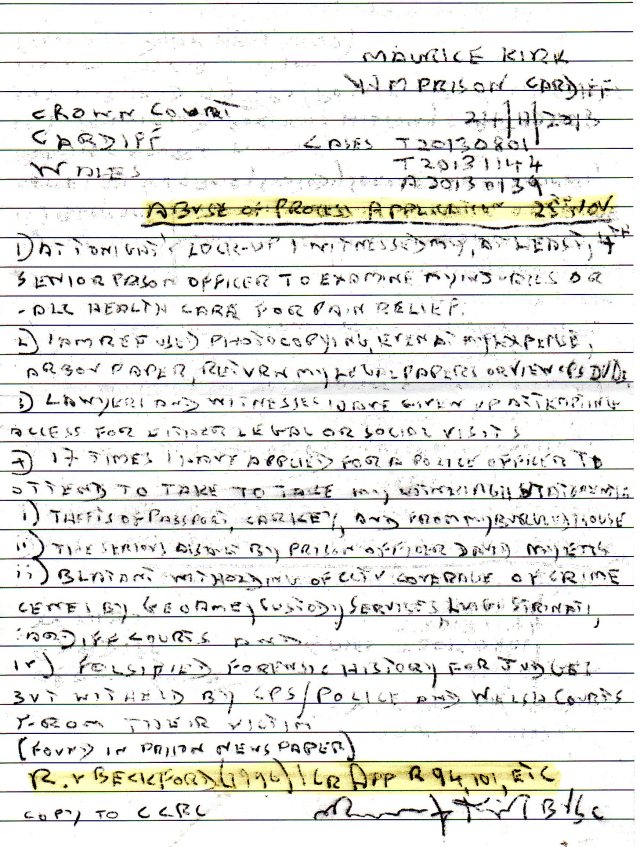 2] I am refused photocopying, even at my expense, carbon paper, return my legal papers or view CPS DVDs

4] 17 times i have applied for a police officer to attend to take my witness statements
a] theft of passport, car key and from my burgled house
b] the serious abuse by Prison Officer DAVID MYERS
c] blatant witholding of CCTV coverage of crime scenes by GEOAmy Custody Services, LUIGI STRINATI, Cardiff courts and
d] Falsified forensic history for judges but witheld by CPS / Police and Welsh courts from their victim = [found in prison newspaper] R.V. Beckford [1996] / Cr App R94, 101, etc.