“1] 19/12 S.O. EVANS realised it needed investigating as no “incident” had
occurred on “B” wing and promised to report back

2] 20/12 S.O. GRIFFITHS promised to come back to me as incident was
recorded on computers on 18th and neither knew no facts. [I was never given documents by officer FARRER]. Each said do not appeal as each would report back same day.

3] Neither have reported back despite IMB intervention. 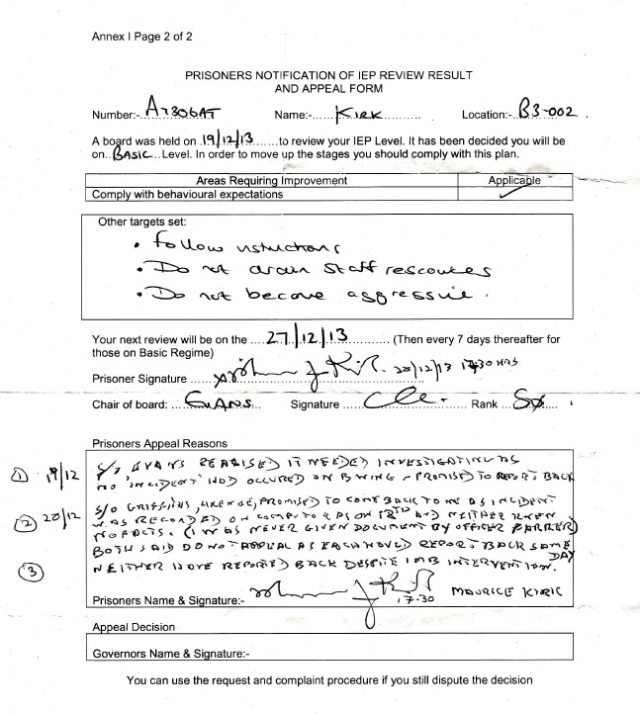 I resent so much these government employees wages being paid by the taxpayer when they seem to be incapable of being honest and non-violent.

a} appallingly he is under “permanent punishment” restrictions and those include

b] no phone calls out,

c] his money being reduced even more than its reduced already,

d] recreation has been limited – no tv etc. – none of these things are now allowed MK because, as his call states, he argued that he isn’t allowed to take his legal papers with him when he leaves his cell [because if he leaves his cell his legal docs in it might be stolen as before, on the previous wing MK stated that 4 times his cell was entered when he was away from it and property was taken].
He says hes refusing to leave his cell as a result.
This is enough for them to punish him via the enforced restrictions hes having to put up with as he is breaking their rules by trying to keep his property safe.

e] he is not allowed to appeal this position of “permanent punishment” with its restrictions he is now in.

f] nothing he’s having to experience is being put in writing by the prison eg. the enforced punishment with its restrictions as stated, the inability for him to appeal his situation, etc.

This truly is an appalling state of affairs.

The gist of MK’s phone call:

Below are 4 sheets received today – 1st + 2nd sheets being a prison “report sheet” relating to MK’s “assaulting a warder” whereby MK received a 12 week term of imprisonment. At the 10 Dec. sentencing hearing MK received a 12 week sentence – talk about a miscarriage f justice! – he was denied many basic Human Rights: his legal documents relating to the charges, reading glasses, he couldn’t hear what was being said, apparently, being in a glass box, and all his witnesses were denied him also, including allegedly a deputy prison governor who allegedly was actually at the location at the time of this alleged “assault upon a prison officer” [Gould], the footages from the 7 CCTV cameras which were at the location were denied MK also. MK has stated the judge had a transcript of what must have come surely from these CCTV cameras – as what other recording devices were at this location?
The sheet states about MK’s alleged “threatening and abusive” behaviour and how he had to be “restrained”. Remember MK was on 2 crutches to even stay upright because of an extremely damaged ankle.

The 3rd sheet relates to a dubious London court hearing were MK wasn’t produced, because he was in MP Cardiff, is freedom being removed yet again on questionable and dubious charges. The way Maurice Kirk is targeted by these authorities is nothing less than a public scandal.

The 4th sheet is apparently from Cardiff Bay police station, James St., not S Wales police HQ, telling me that I don’t have consent to know whats going on in this case regarding police action. Well, I don’t need consent to know that the police are doing their jobs according to British law, that they are upholding it 100%, and are bringing the matters of the assaults upon Maurice Kirk by 2 prison officers to the courts, and the 2 officers charged with what they should be charged with – ABH or assault. A prison officer, and a SENIOR prison officer at that is not allowed to kick an inmate so hard it [allegedly] breaks his ankle, as Maurice Kirk states happened shortly after arriving at HMP Cardiff on the 17 Oct. 2013. Not only that, this senior officer has assaulted MK before during an earlier period when MK was in HMP Cardiff in late 2011. Surely, one could argue, this senior prison officer MYERS is far too violent to be in society in general. See the 4th sheet below from Cardiff Bay, James St. police station, apparently.

Written on the 1st sheet, a prison “report sheet”:

“At 08.30 hrs, 10/12/13 In reception you showed THREATENING ABUSIVE BEHAVIOUR TO O [officer] GOULD SWEARING AND ENTERING HIS PERSONAL SPACE, AND AS A RESULT YOU WERE RESTRAINED.
signature of reporting officer: Gould — Name: Gould ” 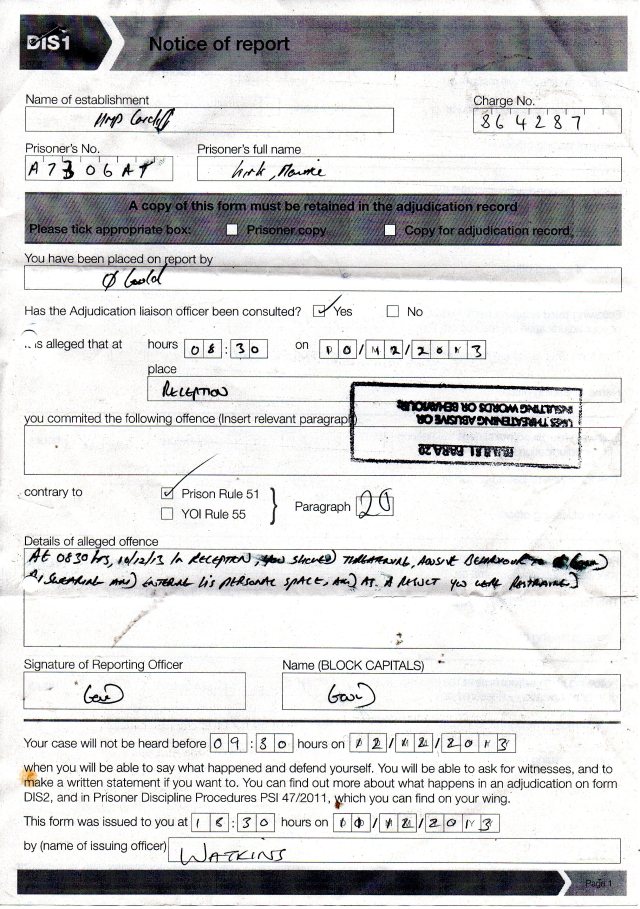 below, the 2nd sheet is the 2nd part to the 1st sheet, on the back stating “”Prisoner’s statement”: and then in MK’s handwriting “see encl. 6 docs as exhibits”. 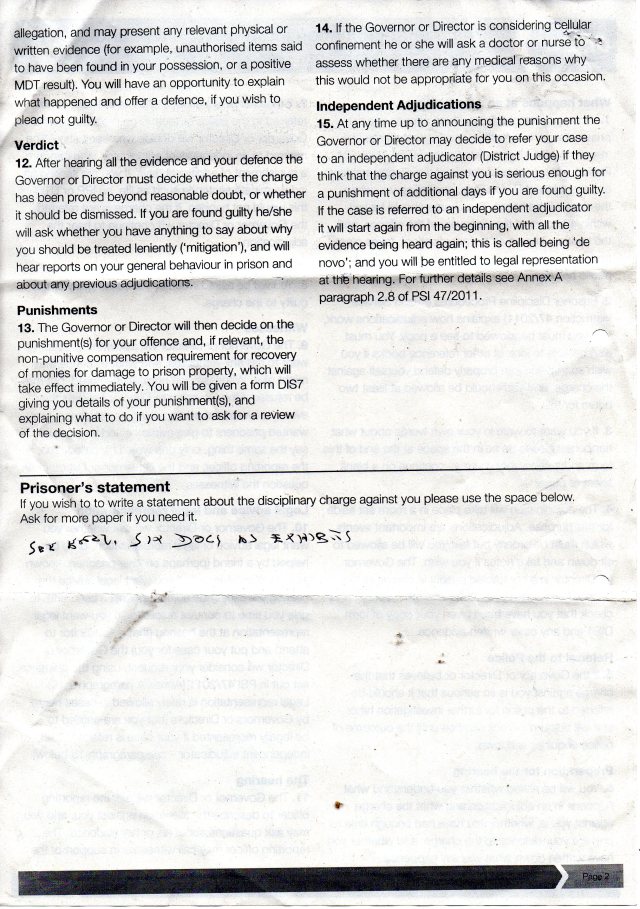 The 3rd sheet is relating to a court hearing in Nov. 2011 relating to the Musa case, at Highbury Corner where he wasn’t produced. He was in HMP Cardiff at the time.

my blog: http://www.butlincat.blogspot.com http://www.youtube.com/butlincat http://www.twitter.com/butlincat
View all posts by butlincat →
This entry was posted in Uncategorized and tagged from maurice kirk cardiff prison dec 23. Bookmark the permalink.
%d bloggers like this: