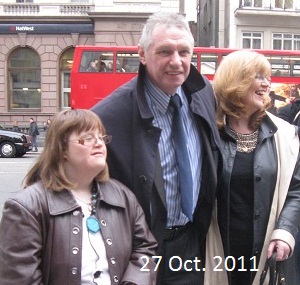 Robert Green and Hollie with mother Anne outside the Royal Courts of Justice Oct. 27 2011

“News Flash – Can you help?

The UK Column team were informed this morning that Robert Green had been arrested at his home in Warrington Cheshire by Sgt Robinson Cheshire Police PC3158 and Detective Inspector Drummond of the Aberdeen Police, a unit of Police Scotland. Drummond claimed to have a Search Warrant for Robert Green’s home but told family members that they would wait for Robert to return home rather than just breaking in.
It is understood that Robert Green was arrested at about 1130 today and had his home searched and computers and other possessions taken by Det Insp Drummond. It is also understood that this officer was involved in the previous arrest of Robert as he campaigned to protect children from high level abusers in Scotland.
Police Scotland confirmed at 1915 this evening that Robert was in custody at Queens Road Police Station Aberdeen Scotland.
According to close family members, Drummond stated this morning that Robert had been arrested for breach of a Non Molestation Order which is believed to have been issued with regard to recent court actions by former Head of Law Scotland Procurator Fiscal Elish Angiolini. Robert Green has campaigned vigorously in recent years for justice for child sexual abuse victim Hollie Grieg and has alleged that the Scottish Establishment has covered up the abuse and that Angiolini failed to take appropriate action when informed of the abuse.
Robert’s family are very concerned for his welfare and safety at the hands of Police Scotland, particularly since he was abused by being held in solitary confinement for four days when last arrested by Scottish Police. The arrest took place whilst Robert was trying to raise public awareness in Aberdeen of the abuse of children in Scotland and abuse cover-ups by the police, courts and wider establishment.
The abuse of power by Police Scotland has continued in this latest arrest, as Robert has been denied his own Solicitor, as offered by the family. Police Scotland maintained that Robert had been offered a Scottish Panel Solicitor but had refused those named. Robert therefore remains unrepresented in Scotland under a law system alien to English Common Law.
Family members were bemused this evening when Inspector Drummond asked if they agreed with the actions Robert Green had taken. When asked for clarification Inspector Drummond appeared to suggest that Robert had been arrested for posting further statements about Angiolini on his web blog. The family stated they were simply concerned with Robert’s welfare.
Police Scotland, now the powerful State police for the whole of Scotland, reported that Robert had only been ‘detained’ and that he would be held for 12 hours and then either charged or released. Timings would indicate that Robert arrived at Aberdeen around 1900 this evening and therefore a decision should have been reached by early tomorrow morning.
Conservative MP for Warrington South David Mowat has been informed of Robert’s arrest, and family and friends are hopeful that this Conservative MP will take action to support Robert, particularly in ensuring he has full and proper legal representation. Mr Mowat can be contacted on 0207 219 7178 or 01925 231267 or david.mowat.mp@parliament.uk.
If you are concerned with Robert’s welfare or the conduct of Detective Inspector Drummond Aberdeen Police or the Scottish Police under Chief Constable Scotland Sir Stephen House please ring 01786 289 070. Remember to be polite and reasonable in expressing your concerns.
Please distribute this press release widely and do take action with the appropriate authorities to express your concerns at Robert’s arrest and treatment.”