Posted on March 10, 2014 by butlincat
Today, 10 March 14: Maurice Kirk hearing =
“Day one of the trial for breaching the R.O. and making threats to damage.

Well the CPS were not on top form today, presentation was approaching the shambolic at one point with various barristers, solicitors and police officers bustling about the courtroom, struggling to play back a tape recording of one of the alleged offences. At one point there was concern that the battery might not last very long! ( proper preparation prevents…………)The opposition was apparently not briefed as well as the money they will undoubtedly charge the public purse would suggest they should have been!
A bad character application was brought forward against Maurice, which of course, as it turned out, had not even been served on him!
In turn he requested a pair of reading glasses so that he might peruse it.
( they do like to rely on pieces of paper that haven’t been served)
This basically means that they would like to use what he has already been convicted of to convict him again! (saves on the preparation they haven’t done).
It also seemed to come as a bit of a surprise to the prosecution that they would actually have to prove that a restraining order existed in the first place! The barrister had to improvise a bit when the judge asked him what evidence he actually had.
Eventually, a Jury was sworn in and after the Judge explained to them that they were in fact the Law in this case, things moved on a bit and a witness was called to the stand.
At this point Maurice requested that he might be allowed the sight and use of some of the legal papers that he has been trying to obtain for so long.
The Judge then adjourned the trial untill tomorrow whilst such papers were listed and sourced.
Maurice Kirk defended himself ably in Cardiff Crown Court despite great pain from an untreated prolapse. He has caught the CPS off guard over a number of issues including proving the very existence of the ‘restraining order’. The jury trial continues...”
mk’s site is: http://www.kirkflyingvet.com 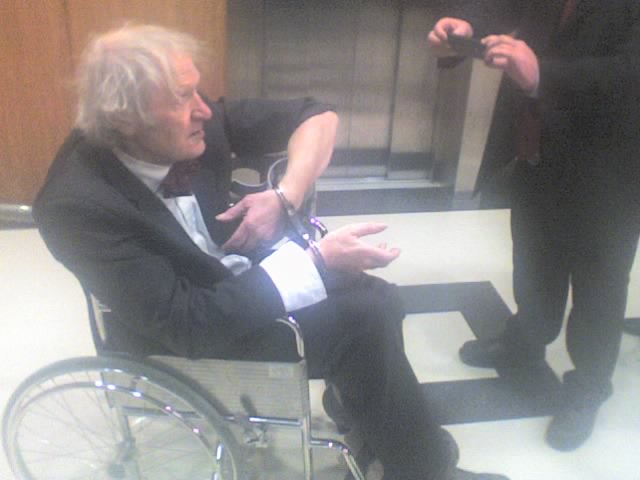 Maurice is now desperately ill and in great pain with a prolapse and needs urgent medical attention at the hospital NOW, but it is being refused by the prison!

At 4.45pm this afternoon 8 March I got a very serious call from MK – who is in great pain with a prolapse = pieces of his body hanging out of his rectum. The prison refuse to take him to the hospital, even though the other dr. said he must go for an internal examination urgently. He says [in his call below] Marnell, the prison ” Healthcare doctor”wont even speak to him let alone help him. He says because hes been on hunger strike theyre refusing to let him have treatment, even though, he says in his call, they said they were going to give him painkillers and sort out the prolapse, but they’ve done nothing.

“Dear Team,
You must be so fed up with the antics of Maurice KIRK but I assure you that it was the antics AGAIN of the Prison Staff which prevented Mr Kirk attending court last Friday and I suspect that by Monday’s appearance (10th March) in the Crown Court in front of HHJ Rowlands at 11am the same story will be told the court.

On Friday (7th) the Hospital Staff told Mr Kirk at 7am that he was due in court that day. He had no idea what the case would be about. He was duly wheeled in a chair down to Reception where the chair was removed and he was obliged to move under his own steam down some steps and into the van which he could see was waiting at the door. He asked the Reception Staff for a pair of crutches which they REFUSED to provide. His own pair had been taken away from him in the Hospital Wing some days earlier. He knew each wing had crutches but the reception staff did not fetch any. He was left on a table in reception for over an hour when a hospital wing staff member arrived with a wheelchair to take him back. The Court was told that Mr Kirk had refused to attend. This sort of thing has happened on numerous occasions. It is no surprise to understand that there is a case involving a member of Reception Staff and Mr Kirk when the Prison denied having possession of his passport.

I enclose a copy of my letter to Governor Cross which may enlighten you further.

Retired Magistrate (appointed by The Royal Court of Jersey)

To the governor of HMP Cardiff from MK’s sister:

I am Maurice’s sister whom he regularly telephones. As you know he has a long running grievance with the South Wales Police and is convinced that some of the lower orders amongst your staff are in league with the South Wales Police is making sure that he has the most inhuman treatment possible. This is one of the reasons he was wanting to be moved to an English Prison and for his judicial proceedings to be also heard by different judges.
I have been a magistrate for the Royal Court of Jersey and know that the legal personnel veer very much towards believing the Police version of events than the defendant’s. In most cases this is appropriate.
I now hear that your Reception Staff who see that prisoners for court are placed in the appropriate transport were again worse than disreputable when the Hospital Wing staff brought Mr. Maurice Kirk to reception last Friday (7th March) in a wheelchair. The chair was removed back to the wing and my brother asked for crutches to get him down the steps to the van and for the courthouse. The staff refused to fetch any for him and left him on a table for an hour until hospital wing staff came for him with a chair. But worse than that happened next; it was reported to court that ‘he had refused to attend’.
Of course it was the same Reception Staff who refused to return his passport and other belongings in September 2013 which culminated in him being in prison on remand. Please investigate.
This man, who must be one of your oldest inmates at 69 years, has a prolapsed colon/rectum which no doctor has treated to date. He is in agony and expected in court again to start a trial on Monday 10th March. The behaviour of your reception staff and your medical staff will be reported. It is against many human rights.

(retired magistrate of the Royal Court of Jersey)

“Cat Lady”, a onetime commenter on MK’s site http://www.kirkflyingvet.com , is now barred from commenting there, for reasons known only to the admin. “Cat Lady” kindly provided this information below regarding the dr. responsible for a report stating that M Kirk had a “brain tumour”, the report being responsible for a lot of grief for M Kirk.

from the GMC site:  http://webcache.gmc-uk.org/gmclrmp_enu/start.swe?SWECmd=GotoView&_sn=Xcp4zKRt8C632vaF2mPfTe4W1-dcqedW3qOr-cH9FogaNiS9B2Iufv6v0glR9lfOY7wlL5yKk5OQWU0w-TFYquD6Jw2cKq-5n3xmCJrp.LdXt5.XsNQH9qipWAhb0zQZw-yvDtF14DAp94jgd3W1jhhcYV0JcyvIapF4wSz4IeLIA9uQgj81WMYLwqibLAD0Fm4c8UuMQNI_&SWEView=GMC+WEB+Doctor+Search&SRN=&SWEHo=webcache.gmc-uk.org&SWETS=1394409248&SWEApplet=GMC+WEB+Health+Provider+Search+Applet
====== scroll down for more posts…