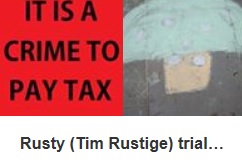 “Please write to Rusty too!

Robert has by now received some 130 birthday cards, not to mention his full daily postbag ever since he arrived in HMP Perth over 6 weeks ago – great, keep it up!
It’s a way of showing the Scottish authorities that locking Robert away is no solution to the perennial problem of Hollie’s campaign for justice which is still live, despite the combined efforts of the Aberdeen & Shropshire authorities plus a little help from GCHQ? M15? Levy & McRae? Scottish Media Group? etc. to quosh it. Not only does it not go away but this kind of treatment meted out to key protagonists immediately revives it and rekindles interest in it. From that point of view therefore it would surely be better if Robert were back at home pending trial rather than being a “legend” or “hero” in Perth prison. Indeed his solicitor is currently working on a renewed bail application in the hopes that reason will finally prevail in high places.
Rusty is of course not quite as well-known as Robert but the feeling of revulsion over this latest draconian action against another honest man standing up for better child-protection in Scotland is exactly the same, also Rusty’s trial and the standard of police forensics revealed at that have given no reassurance whatsoever that justice was done at Aberdeen Sheriff Court 24-28 February 2014, any more than it was done in respect of Robert at Stonehaven in January 2012.
So please everyone spare a few moments to drop Rusty a line and express support for him, send him bits and pieces of interest from the press, stamped addressed envelopes etc., you all know the drill by now!
in fact all the prisoners who have been moved from Perth prison have been held in the first instance at Grampian jail in Aberdeen and are only now during this coming week being transferred to Peterhead, then Grampian will finally close. CORRECTION got this all wrong, Craiginches Aberdeen closed in 2013, the new facility in Peterhead on the site of the old Peterhead prison is HMP GRAMPIAN, Scotland’s new state-of-the-art mixed sex penitentiary. Rusty will be transferred there tomorrow from which I infer that he’s been held in the cells at Queen’s Street police station Aberdeen over the last 4 days since being sentenced on Thursday or have I got that wrong too?!
Rusty’s prison number is No. 134031 and please as usual write that both on the envelope and inside your letter or card or whatever. The address to write to him is Tim Rustige No. 134031, HMP (not Peterhead) Grampian, South Road, Peterhead AB42 2YY.