The message below was sent to the Prime Minister, Secretary of State, the Ministry of Justice and many more MP’s and media today, the 30 October 2014, after Maurice’s sister received an urgent phone call from another prisoner at HMP Swansea who told her of Msaurice collapsing in the prison:

Why has Maurice Kirk not had the operation hes been waiting for for over 7 months whilst in HMP Swansea?

his email I have just received from his sister:

“Just had a worrying call from a prisoner, unfortunately I was in the garden and did not pick up the call but the message said ‘phoning on behalf of Kirk who is very ill, rolling about the floor and is sick on the floor’  (It was a foreigner so a little hard to clarify)”

The Prime Minister is f lly aware of Maurice’s serious medical condition – below is the letter sent 36 days ago to him, to which I received the reply which is attatched. The Ministry of Justice is also fully aware as they’ve been written to since Maurice entered prison on the 15 Oct. 2013. Indeed, Mr. N. Hardwick has visited Maurice 5 times recently, Maurice states.

ON IN A HOSPITAL, THATS BEEN REFUSED FOR OVER 7 MONTHS, PRIME MINISTER?

I wrote to you originally on the 8 September this year regarding the serious situation Mr. Maurice Kirk, 69, is in. He is in HMP Swansea and in need of an urgent medical operation, but because his medical records from “Caswell Clinic” and/or elsewhere are being witheld by the prison, along with possibly other departments the surgeons cannot perform this urgent operation. Mr. Kirk has parts of his body exiting his rectum and is in dire need of a colonoscopy operation or something similar. He has been awaiting this treatment for over 6 months now, but still these agencies have refused to forward Mr. Kirk’s medical records – the result being his much needed operation cannot go ahead.

Mr.Kirk is in a wheelchair now, and has been denied medical treatment before [in HMP Cardiff, for example], but it is about his present need for this operation I write, and the denial of his medical records being made available to him and/or the surgeons at Llandough hospital who are, I understand, performing the operation for this serious condition.

Mr Cameron, I do not need to tell you that it is a gross breach of Mr. Kirk’s Human Rights not to be allowed this medical operation.

I attatch also my letter to you dated 8 Septewmber, because nothing has been done at all regarding Mr. Kirk’s medical procedure taking place, nor his records being forwarded to the appropriate departments.

If Mr. Kirk does not have this operation soon he could well die if complications set in, eg. blood poisoning or similar caused by such a serious condition not being attended to. He has waited 6 months already for the operation since his ailment began in mid-March 2014. There is no reason on earth why Mr. Kirk cannot have this long awaited operation, but if there is or are such reasons why he shouldnt have this operation I invite you, or somebody connected to you, such as the MOJ who have dealt somewhat lamely with my request to you dated 8 September already, be so kind as to inform me what exactly those reasons are? After all, surely we should treat our brothers and sisters who are seriously ill with medical problems, but my, and others,  attempts at getting these medical records of Mr. Kirk forwarded to where it matters have been blocked time after time. I’m sure you will agree this is far from being right, apart from being completely and absolutely against Mr. Kirk’s Human Rights as an inmate in one of HMP;s prisons.

I also attatch, for your information, 2 sheets received from Mr. Kirk which tell of his appalling targetting by certain departments, especially the South Wales police, who have been particularly active towards him. Mr. Kirk has been incarcerated at least 20 times since 2009 – mostly on unfounded charges, and therefore released without charge – taking up nearly 3 years of his life being incarcerated for no reason.
Also he has been stopped in his car over 35 times since 2009, for “drink/driving” tests – always to be found negative. He was often stopped with no breath test taken at all! This shocking targetting was performed by the South Wales police with whom he has long running civil cases against, the very reason for his dubious incarceration as a MAPPA Level 2 subject now – to stop his civil cases. To classify Mr. Kirk as a MAPPA Level 2 subject is a ridiculous penalty this 69 year old man has to endure. He is in prison simply to stop the civil case against the South Wales police. Mr. Kirk is denied even the most important of his legal documents, which is an entirely another story, so he cannot prepare for his cases. Witnesses are refused him for court hearings also, along with much more.
I ask you please to listen to this very recent radio interview video with his sister Celia, in which she tells of her brothers appalling persecution by the authorities in South Wales =
“Rough Justice: South Wales Police persecute former vet & pilot Maurice Kirk who’s suing them”

Please see to it Mr. Kirk’s medical records are freed up so as he can have his long awaited medical operation.

Thank you for your time.

J. Graham  concerned citizen
25 September 2014.
#########################################################
F.O.I.A. REQUEST SENT TO THE SECRETARY OF STATE, MR. C. GRAYLING, and
THE GOVERNOR OF SWANSEA PRISON – no response was received from either party after the  required time for responding and the matter was progressed to the Information Commissioner’s Office, who are supposed to be dealing with this matter. Only a standard acknowledgement letter has been received, and no case number has been allocated to this case, despite the obvious urgency.
From:  Mr. J. Graham,
To:  The Governor, H.M.P. Swansea, Oystermouth Rd., Swansea, SA1 3SR
and
Mr. C. Grayling, House of Commons, London
22 Aug. 2014
Dear Sir,
This is an official request under the Freedom of Information Act 2000 for the medical records pertaining to Mr. Maurice J. Kirk, at present resident in HMP Swansea [address above], his prison number being A7306AT.
The prison with others have failed to provide Mr. Kirk, or the Llandough Hospital, Wales, with Mr. Kirk’s medical records, and therefore stopped Mr. Kirk from having vital medical treatment, viz., medical treatment for stomach and related ailments.
The concerned parties are invited to reply within 28 days under the rules and guidelies of  the F.O.I. Act 2000. Failure to do so will result in further action being taken.
I write on behalf of Mr. Kirk who has already given me permission in writing to act on his behalf – I attatch a copy of the letter of permission to act on Mr. Kirk’s behalf to me from him.
I look forward to your cooperation in this serious matter.
sincerely,
Mr. J. Graham 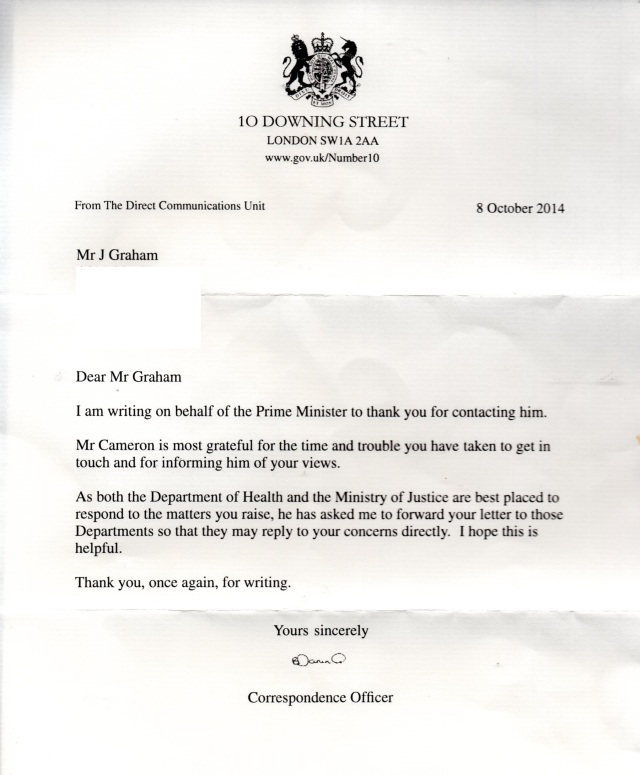