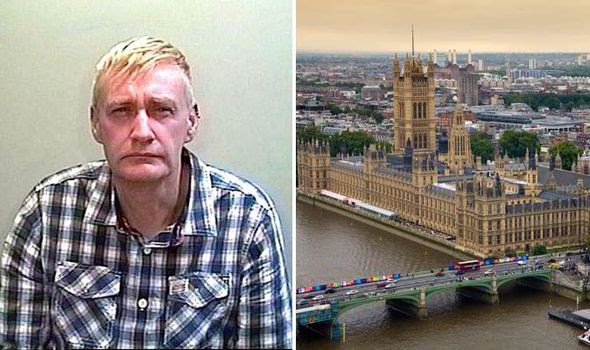 A CONVICTED paedophile dramatically had his sentencing adjourned yesterday after he told a judge he “knows the names” of the alleged Westminster child sex ring.
Serial sex offender Michael McAuliffe, 50, threatened to shout out the names before being bundled back to his cell by prison guards.
Judge Peter Benson, sitting in Bradford Crown Court, West Yorks, had seconds earlier adjourned the case to give police six weeks to investigate the claims.
Judge Benson had earlier passed the defence and prosecution council a letter from McAuliffe’s solicitors before the case was heard and as the paedophile was being led into the dock from cells
His barrister James Bourne-Arton, after reading the letter, told the court: “He has a desire to provide relevant information into investigations into those which concern the 1970s in the Westminster area.
“He has details and information, and more, there are other instances of child abuse and a paedophile ring, which he is willing to provide information on.”
Mr Bourne-Arton admitted McAuliffe’s motivation for helping police is to do a deal and get a more lenient sentence.
The court heard that West Yorkshire Police would need a “scoping interview” for officers to assess the degree of usefulness to their inquiries.
McAuliffe had fled to London from West Yorkshire because he was a closely monitored sex offender in his home town of Haworth following a conviction for possessing child pornography.
But he was brought back to justice after being spotted by an eagle-eyed Bradford police officer who was enjoying a break in the capital.

my blog: http://www.butlincat.blogspot.com http://www.youtube.com/butlincat http://www.twitter.com/butlincat
View all posts by butlincat →
This entry was posted in Uncategorized and tagged "Convicted paedophile tells judge he knows the names of alleged Westminster child sex ring". Bookmark the permalink.
%d bloggers like this: