MAURICE KIRK IN PRISON OVER 420 DAYS – THE DISGUSTING UNHYGIENIC CONDITIONS MK IS HAVING TO PUT UP WITH IN HMP BRISTOL – 12 DEC. ’14, + IMPORTANT DOCS. 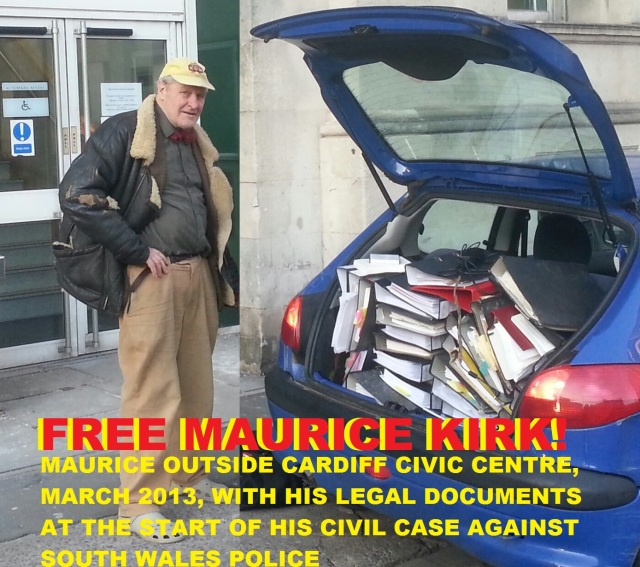 The appalling situation Maurice Kirk is having to put up with continues the the 3rd prison he’s had the misfortune be in – at present he is unfortunately in H.M.P. Bristol, who seem to disregard not only MK’s basic Human Rights, but also the “Health and Safety” regulations in place set for H.M. prisons. Communications sent to the Prime Minister, Home Secretary and Secretary of State, include:

“Just had phone call from M. The prison authorities are being made to get MJK to sign a piece of paper to do with sex and children etc. This has been produced from within  BARRY POLICE STATION so that M will be killed within this Bristol Prison because they do not realise that the evidence is false (they have not seen the evidence of Welsh Justice) Apparently the Cardiff Prison understand that no way is M a child sex offender. He expects to be moved to the ‘special wing’ where he will have no contact with other prisoners and will remain at the mercy of the prison staff.

He was denied his court hearing on Friday because he complained about being ‘set upon’ on two separate  occasions by first, GeoAmy and then Bristol Prison Staff. They connived to stop him journeying to Cardiff for his Family Court Appeal. A prison officer was dozy enough to come into his cell and read out his complaint form and the response from the senior handler. He had written…’we cannot process this form because we cannot read it’ but that officer could!”

” Latest call started with a description of his recent suffering . He is in a chair with wheels, the type porters in hospitals use to wheel patients about. He is not able to propel himself.

He was taken to his bathroom area where he was left for 7 hours. He ran a bath and called for help to get in by ringing the bell (which I think rings until it is attended to) He ran the water , let it go cold and filled again seven baths in all. NO-ONE came.
5 officers arrived at 9 o’clock at night and moved him back to his cell. The last bath was filling but not one of them switched off the water. It flooded the bathroom and his cell where his files were arranged in boxes on the floor. He did his best to save them but many will need careful prising apart and drying out. Of course they took no notice of his bell that time either. As revenge they have made sure that :

he has had no medication yesterday nor today .
No hot water in a flask to make tea today,
no breakfast,
no lunch.
no photocopying

He believes the TV will be removed , a luxury that arrived on Thursday when the log jam of no mail etc was eased.

He did get a response from one assault DIRF form dated 1st December. No police did come in to investigate assault complaint.”
At least he was still alive to make the call out.”

In a communication from MK sent by a supporter on the 11th December ’14 MK writes:

which, an excerpt transcribed, states:

“1] “It took 18 days to eventually allow me a bath and change of of urine / faeces sodden clothes and similar bedlinen originating from A+E [from when MK was taken to Bristol Infirmary from a court hearing because he was in so much pain…ed.]

2] No doctor will stop to discuss possible diagnosis or whether another date has been fixed for my operation after the South Wales Police kept cancelling them.

3] I am denied my own wheelchair [self propelled] or similar meaning no one will help me in or out of the current one.”

This is disgusting, with MK describing a flouting of the rules the public never get to see.

Yet regarding even simple hygiene, let alone anything else, we are led to believe total nonsense and untruths from the “Prisoner Casework” section of the “National Offender Management Service” [N.O.M.S.] who stated clearly in a reply to me:

and, regarding M. Kirk’s denial of medical treatment whilst in H.M. prisons:

Doesn’t this example of blatant untruths on N.O.M.S.’s part show a government department where no one can believe anything they say? What MK is experiencing goes completely against what N.O.M.S. would have us believe. Below, the full reply from N.O.M.S., who answered earlier regarding another inmates complete lack of care and medical treatment whilst in H.M. prisons:

“On Friday 12th December after a silence of some three weeks (he had managed a quick call having arrived at Bristol) Maurice was able to speak to me for some 40 minutes.

He was on the phone because he had an early morning visit by two prison staff who said ‘You have to come with us as you have a court case’. This was the first he had heard of a court case on 12th December 2014 and so he asked which court and which case. It appeared that they did not know. Maurice said ‘How can I prepare for a case I know nothing about?.’ ‘Come with us’ was their reply. ‘Wait while I find my glasses, paper and pen’. They wheeled him out of the cell and asked if he wanted to make a phone call as he passed the telephone. He said ‘Yes’. Remember he had not had access to the phone for three weeks. As he could not immediately recall his pin number he was unable to make it. They invited him into the office to make the call. Just then the message arrived that the transport to the court had gone as they could not wait for him. I have subsequently discovered that it was a Family Court matter in Cardiff. Justice denied by forces of the Crown.

He could not have gone to court in the state he was in anyway. He had been denied clean clothing, bedding, a shower or bath and he had been suffering from his intestinal problems FOR OVER THREE WEEKS. He was unable to get himself into his bed for the previous three days and so he had slept in his chair.

Needless to say he has been denied access to his laptop, legal papers and photocopying and so has not been able to progress his civil case.

He also reported that he had been assaulted twice since arriving in Bristol. Once by GeoAmy staff on leaving Bristol Crown Court when 5 men set upon him and then dragged him to the transport. ( Fri 21st Nov 14)They could have used his chair and chair hoist but chose instead to assault him, causing injury. His subsequent complaint form never reached the appropriate Prison Officer. He was further assaulted by Prison Staff when a number of them, including PO 180 who was not the ring leader on Monday 24th Nov 14, physically dragged him onto the van, again not using the chair hoist and threw him into a very small plastic cubicle within the van. On reaching court the GeoAmy team refused to handle him and so again he was denied access to his Bristol court case. How can this be justice? Denied again by forces of the Crown. Needless to say none of his complaint forms have reached their appropriate destination.

After this phone call he received his first doctor visit. Dr. V. Boller was unable to access health records from any Welsh Hospital. However, she agreed with Maurice that he needed a colonoscopy. He has since had a bath too! He has also been allowed to photocopy and he received backdated mail of over three weeks.

The security officer on his wing wanted Maurice to sign a new restraining order without allowing him time to read it nor agreeing to allow him to keep a copy. Under those conditions he refused.

Maurice is convinced that , as a MAPPA 3 person, NOMS will continue to move him from prison to prison to keep him away from his helpers and more importantly his documents which hold so much evidence of Crown blunders and malfeasance.

(Please send a Christmas card to M to show your support:

The P.M. has been told about much of what has been happening to Maurice Kirk whilst imprisoned recently – the denial of the medical operation for over 10 months, for example, but nothing has been done. 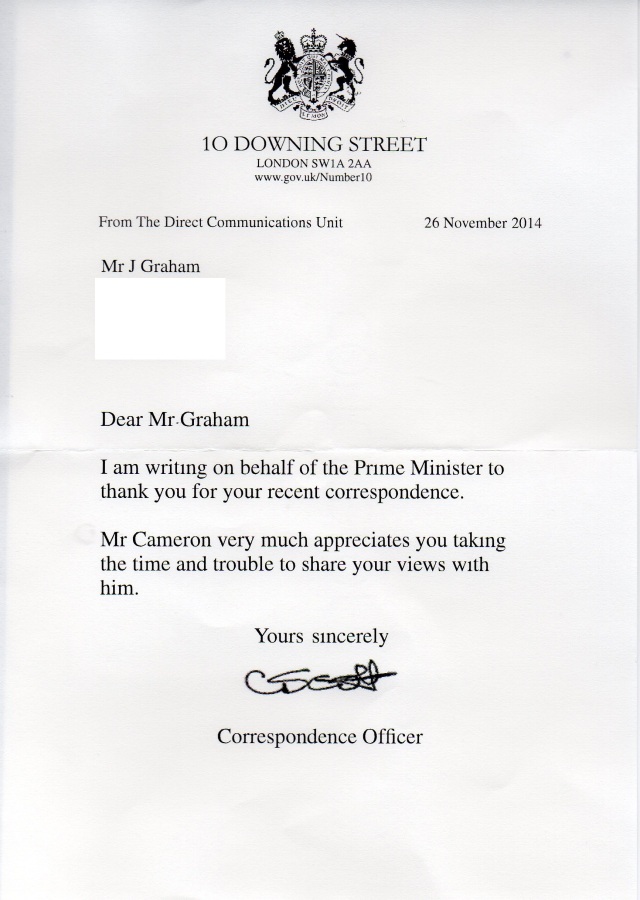 Below, more important docs. received, in no particular order – note the 1st sheet shown, relating to the faked medical records, used in court in 2009 to the demise of MK, the intent, allegedly, to get MK locked away forever in a secure, closed hospital. The person responsible for concocting this report, a consultant psychiatrist, has since left the N.H.S. and is immune from prosecution. 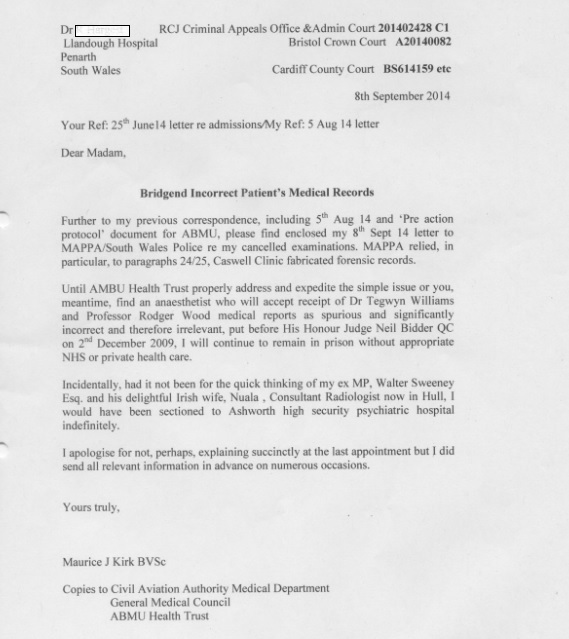 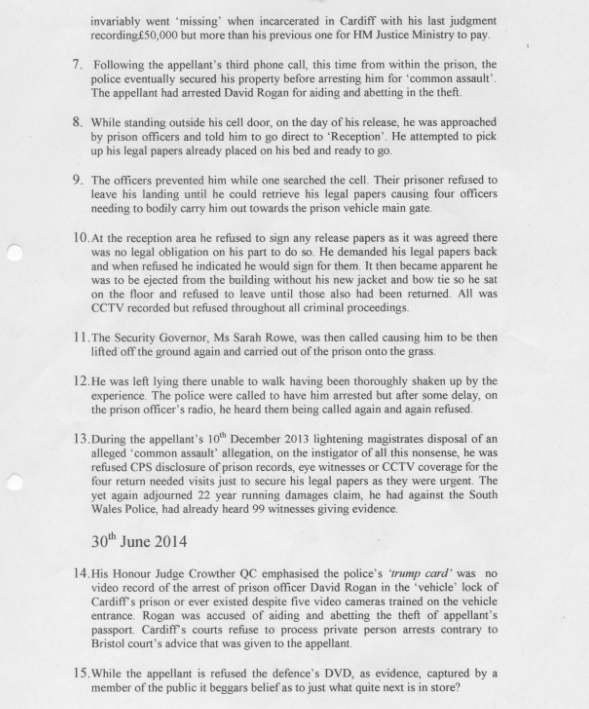 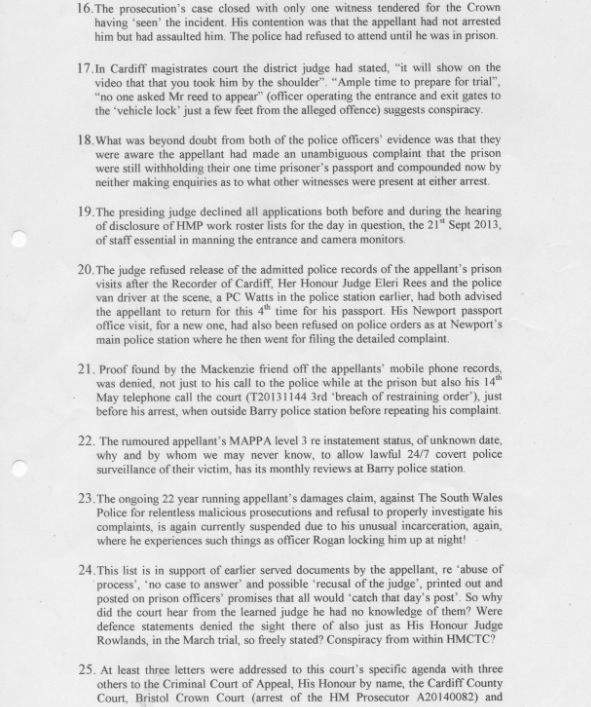 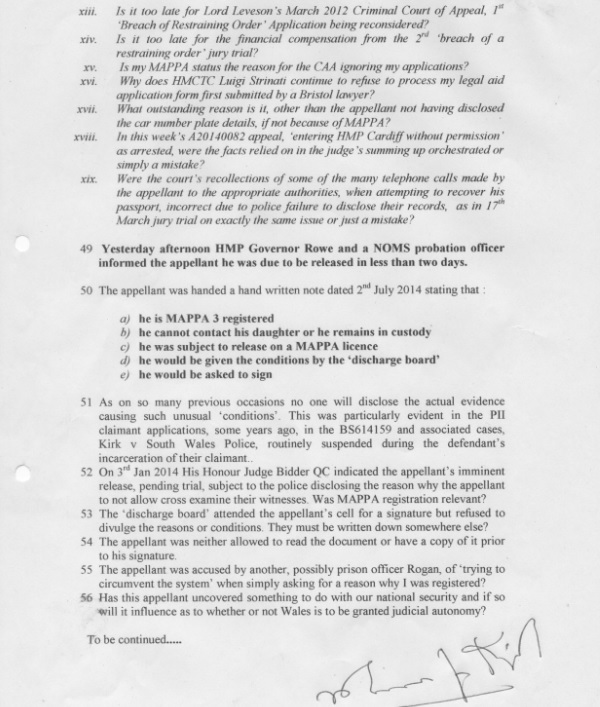 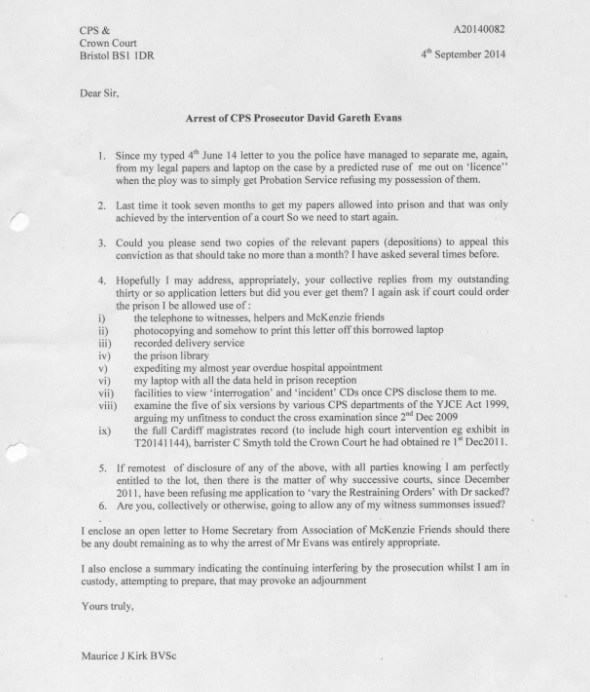 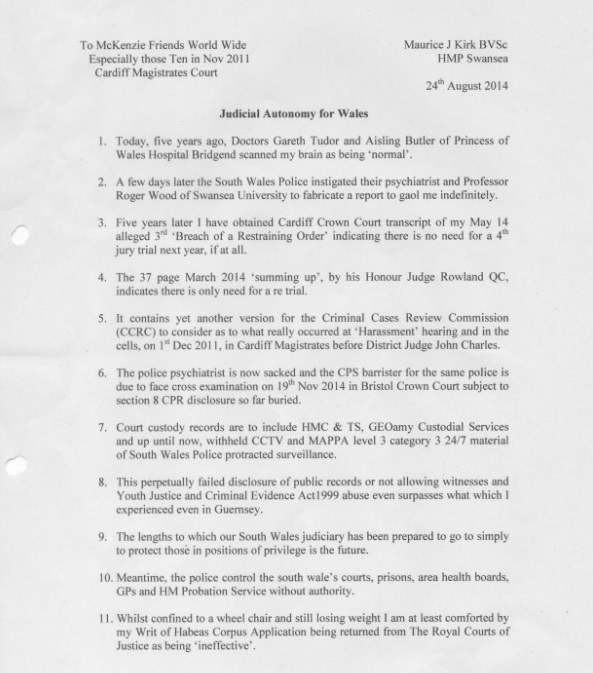 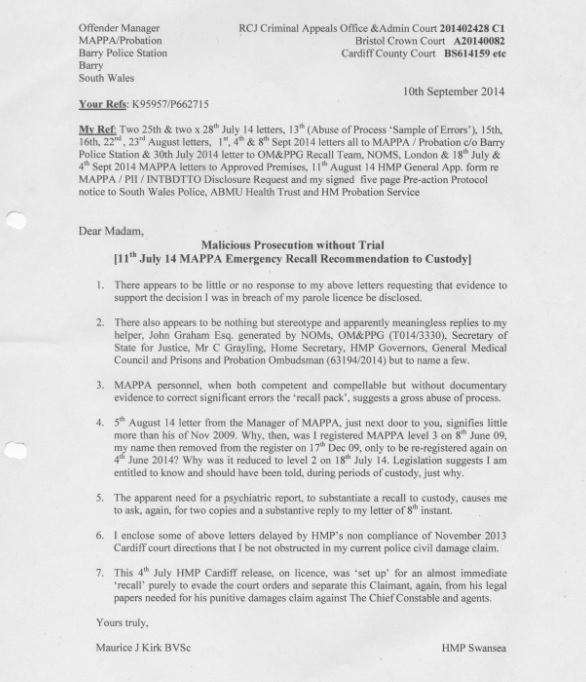 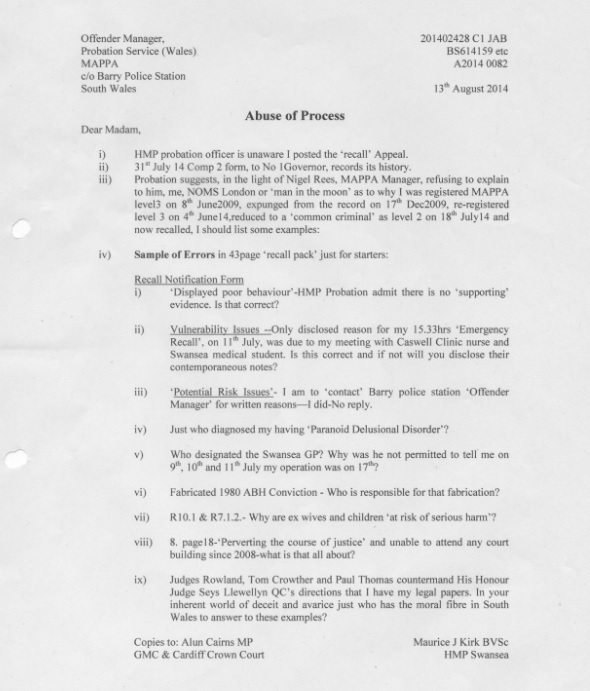 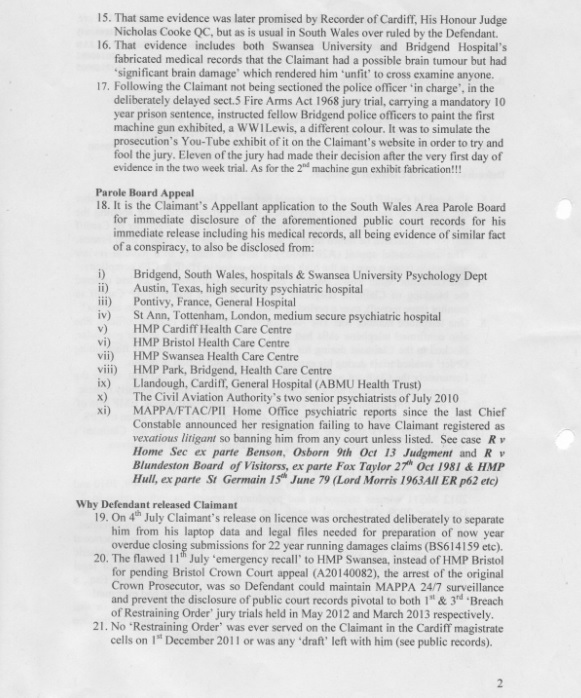 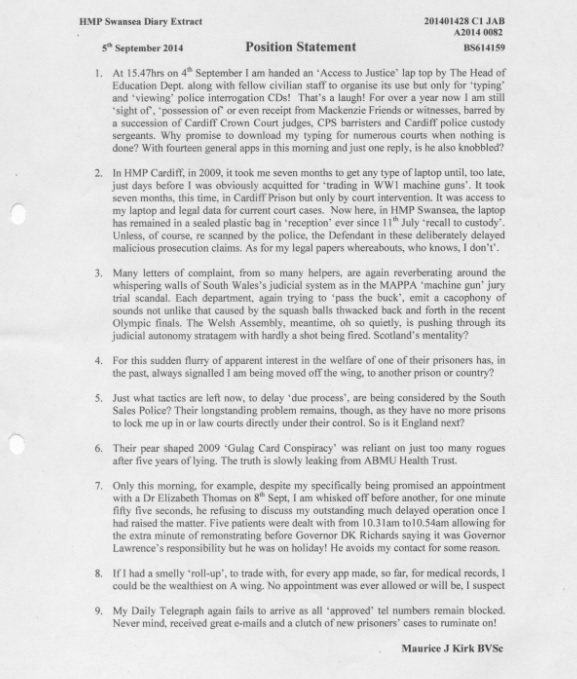 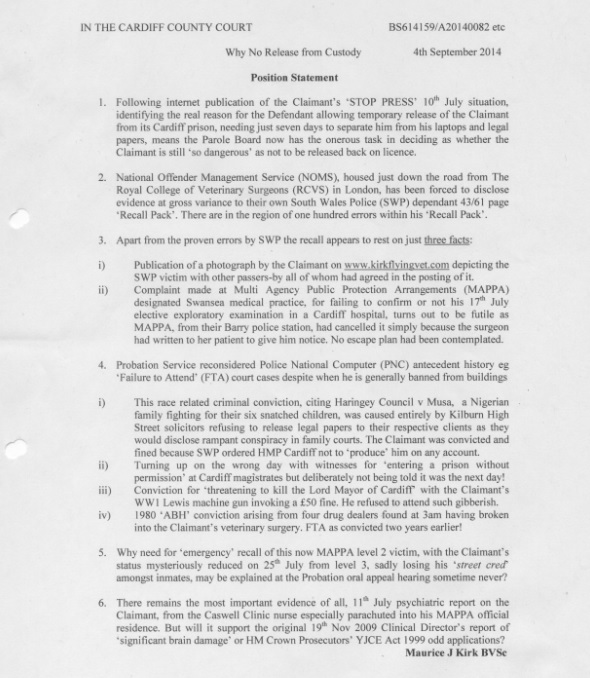 See archives on right of page, or scroll down for more posts.