1] MK’s complaint about a £1000 cheque he received in mid-December 2014 still not being cashed, with HMP Swansea’s responses.  Please bear in mind the cheque was received by HMP in December 2014, and much more could’ve been done, but of course, wasnt. 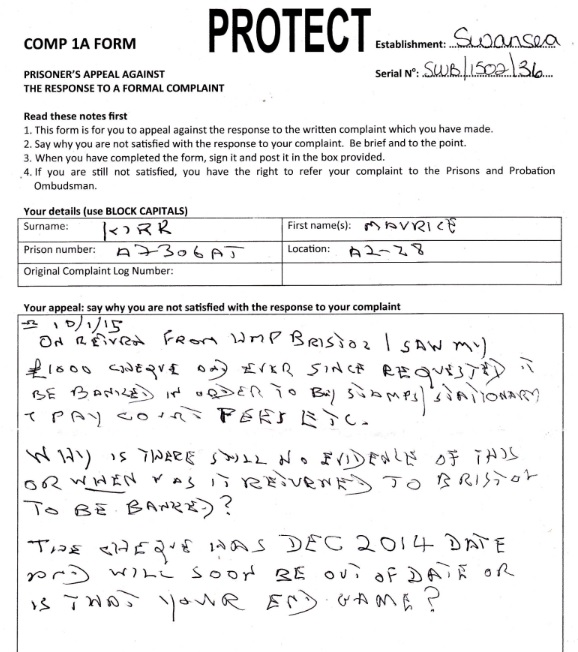 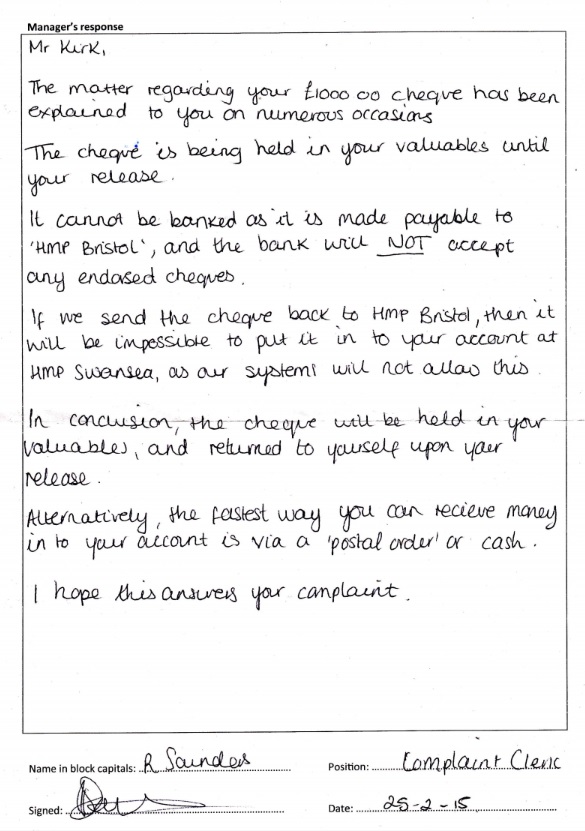 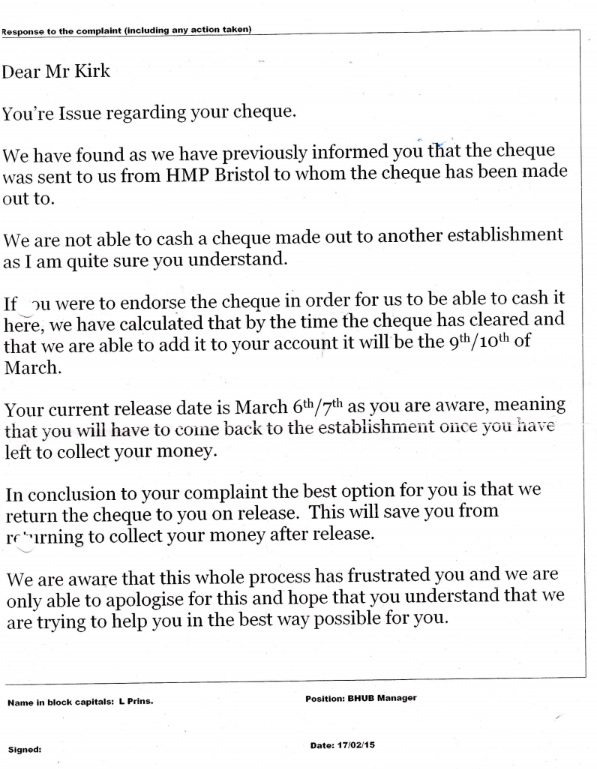 2]  an affidavit from Nov. 2014 by a family member regarding the continuing denial to MK of certain “Clerk of the Courts” notes , and MK’s statement 18 June ’14 : 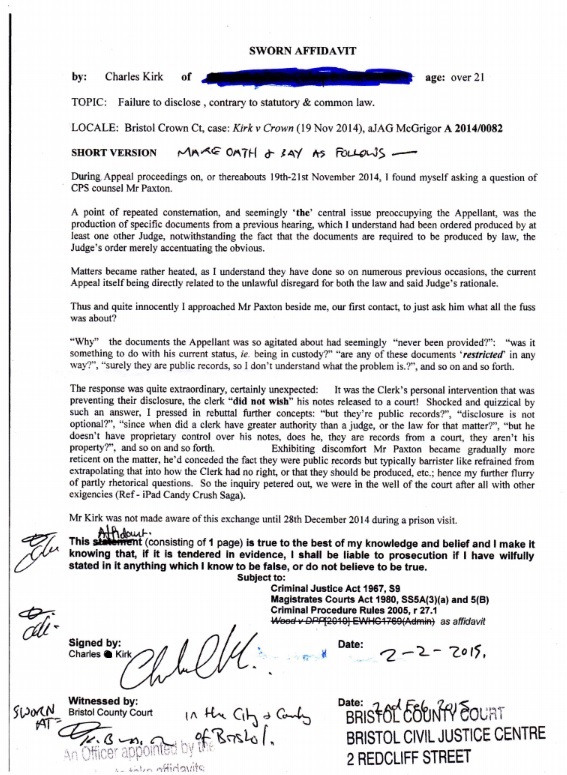 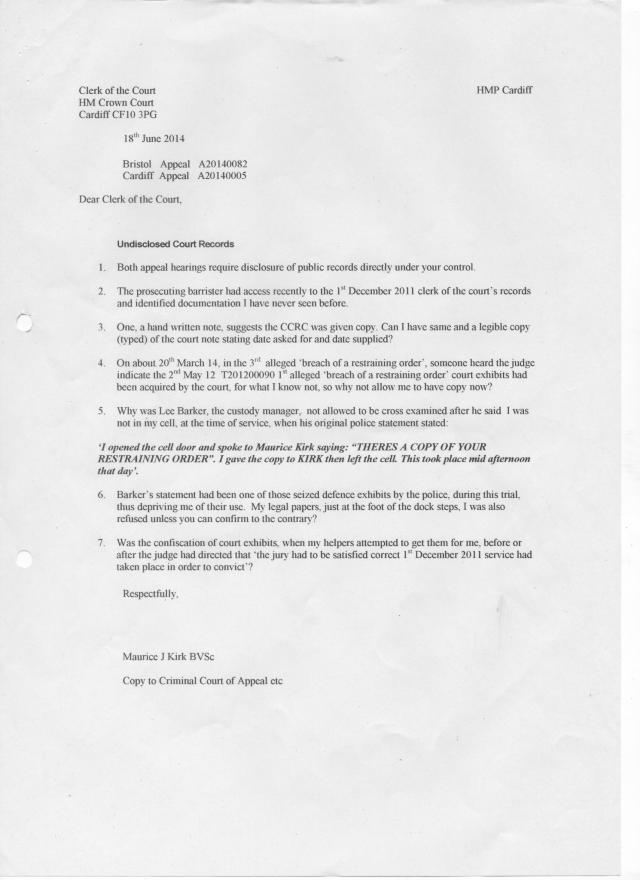 3] Regarding the attempt, in 2009 to have MK locked away forever in a high-security psychiatric hospital [“Ashworth”], using what has now been revealed to be a fictitious report written by the now ex-NHS and “Caswell Clinic” consultant psychiatrist and director [who was in no way qualified to make such a report, it being made without any medical examination of MK also], which stated MK had a “brain tumour” and also “a paranoid delusional disorder” [used in court proceedings to the detriment of MK] –  the renowned brain specialist Dr. P. Kemp of Southampton University’s comments regarding MK’s alleged “brain tumour”:

Following that a  handwritten note from MK which states [qu.] “Damning rebuttal neuropsych report over brain scans done at Bridgend Hospital. Crown court kept quiet. Received on 1/12/09. Police fabricated reports, the day before police tried to have me sectioned to Ashworth”. [unqu.]. 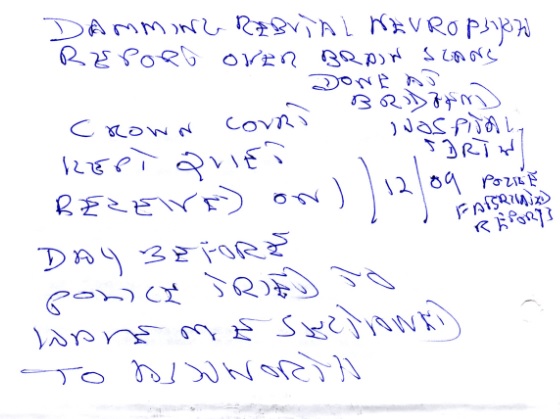 Ashworth is a secure mental hospital – from Wikipaedia: “Ashworth Hospital is a high-security psychiatric hospital in Maghull, Merseyside, England. Ashworth is one of the three high-security psychiatric hospitals in England and Wales, alongside Rampton and Broadmoor, that exist to work with people who require treatment due to their “dangerous, violent or criminal propensities”.

The following video describes the outrageous position MK was put in, in 2009, published on 30 September 2009 by “realzoomy”:

“The persecution of Maurice Kirk “. =

Maurice was subsequently acquitted of all charges [“the machine gun trial”] and set free after 8 months incarceration then, spending 3 months of the 8 months on remand in “Caswell Clinic”, Wales, the director / consultant psychiatrist of which [now ex-director / and ex-consultant psychiatrist] manufactured the false report stating MK had a “brain tumour”. It is MK’s medical records from this place and time that is stopping the urgent stomach operation going ahead – the records are simply refused being shown to anybody, including the potential surgeons for the medical operation, who cannot perform the op without seeing MK’s full medical history. Countless approaches to the Prime Minister and other top government figures, by friends, family and supporters informing of the outrageous situation concerning Maurice Kirk and the subsequent denial of the urgent medical procedure have all been contemptuously ignored, while Maurice has gone, since his arrival at HMP Cardiff on 16 October 2013, from being a perfectly healthy 68 year-old to being now bedridden and seriously ill, waiting in vain for an urgent medical operation which is refused being given him. What kind of people are these that are denying this 70 year old man – a pensioner – this urgent operation?

It is heartbreaking not only what they are doing to MK, but how they are getting away with it.

Below, a letter from MK to the GMC [General Medical Council] forwarded to the Royal Courts of Justice Appeals Court, with significant points relating to the denial of the long awaited operation, this serious ailment beginning a whole year ago, at the end of the 1st week of March, 2014: 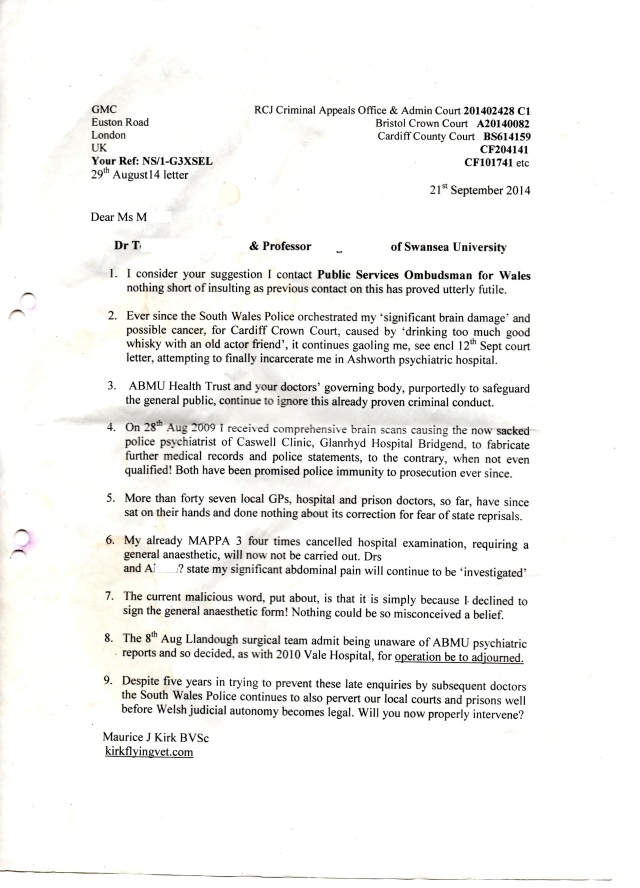 Here, a letter from the Ministry of Justice May 2013, not worth the paper it is written on, stating that “all patients receive the best possible treatment” – they are talking about “prison inmates”. Not so for Maurice Kirk, evidently, A REAL DISGRACE!! 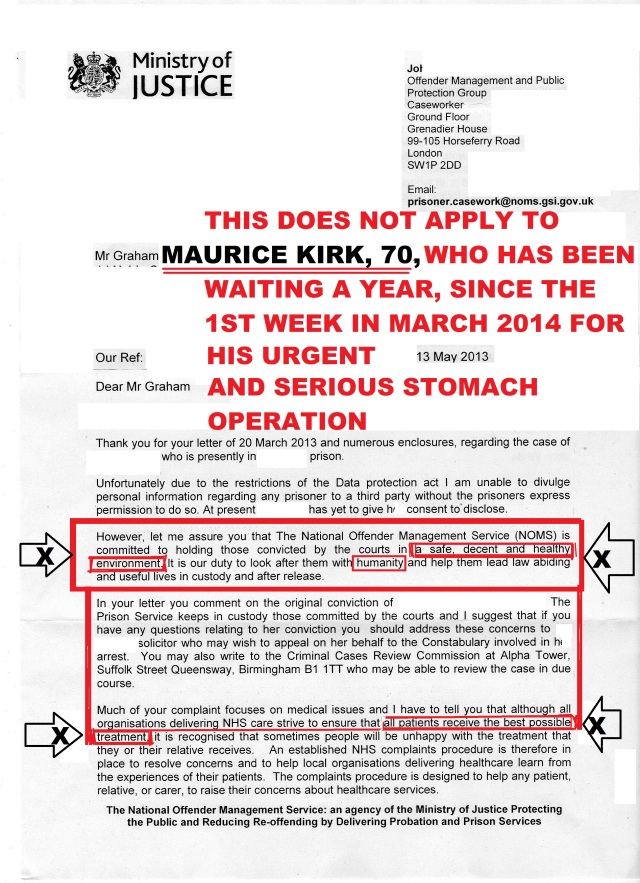 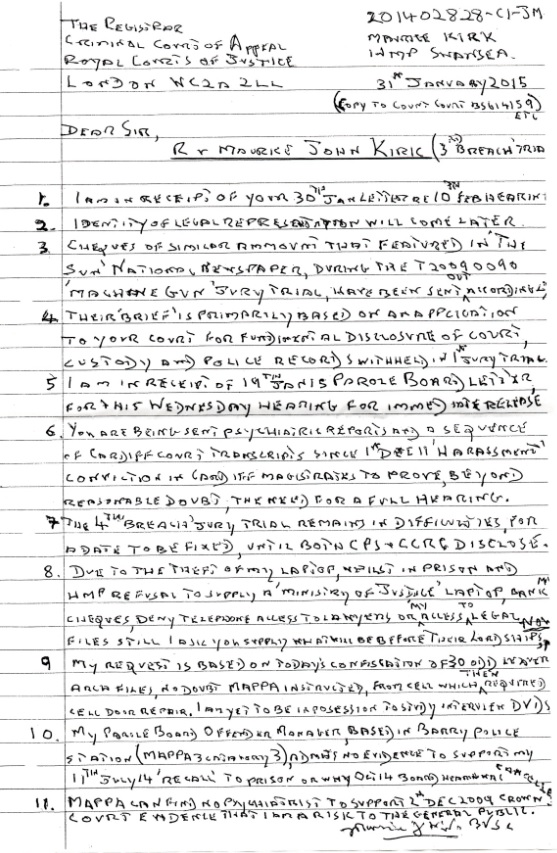 VIDEO – SEPTEMBER 2014, “Dialect Radio”, made whilst Maurice was suffering all kinds of injustices and victimisation whilst in either HMP Cardiff [the main location for the past 14+ months], Swansea, Bristol, and Parc [only a few days there]

“Maurice Kirk, unlawfully held, at present in HMP Swansea + other hellholes since Oct. 16 2013 – just prior to the “Final Submissions” of his civil case against S. Wales police – see this video of the radio broadcast from his sister:

Important past posts from this site, 2015 only:

LETTER TO THE PRIME MINISTER: MAURICE KIRK – NOT TAKEN TO THE COURTROOM FOR HIS HEARINGS 7 TIMES!! [actually its more!]:
https://butlincat.wordpress.com/2015/01/22/letter-to-the-prime-minister-maurice-kirk-not-taken-to-the-courtroom-for-his-hearings-7-times/

[NB: MANY OF THESE NEWSPAPER REPORTS ARE VERY BIASED AND UNFACTUAL AGAINST MK – IT SHOULD BE SAID THAT IT IS ALLEGED MK HAS BEEN REMANDED TO PRISON AT LEAST 9 TIMES SINCE 2009,  WITH A TOTAL OF OVER 3 YEARS WASTED ON THESE POINTLESS AND HARRASSING REMANDS, AS NO CONVICTIONS ACTUALLY OCCURRED RELATING TO THESE REMANDS BEFORE THIS PERIOD OF INCARCERATION WHICH BEGAN ON 16 OCTOBER 2013 [MK SPENT THE NIGHT OF 15 OCT. IN BARRY POLICE STATION CELLS, AND POSSIBLY OCT 14 ALSO].  NO ACTUAL CONVICTIONS WERE BROUGHT AT ALL.  ALSO SINCE 2009 MK HAS BEEN STOPPED OVER 35 TIMES, WHILST DRIVING HIS CAR, FOR DRINK-DRIVING TESTS. NOT ONE CONVICTION RESULTING AS A RESULT OF ANY STOP [ALLEGEDLY]. INDEED, MK TELLS US OFTEN HE WAS TAKEN TO THE POLICE STATION FOR THE D-D TEST, ONLY TO BE RELEASED WITHOUT EVEN BEING GIVEN IT!  MK HAS AN ONGOING CIVIL CASE AGAINST S. WALES POLICE FORCE – see the radio broadcast interview with MK’s sister on “Dialect Radio”, September 2014 =  video:

ATTEMPTS by Barry’s ‘flying vet’ to bring criminal charges against a former chief constable, psychiatrist and solicitor were thwarted by a judge last week.

BARRY’S ‘flying vet’ was this week cleared of charges relating to owning and trying to sell a machine gun.

See archives at right of page, or below for more posts from 2014 + earlier  re: MAURICE KIRK 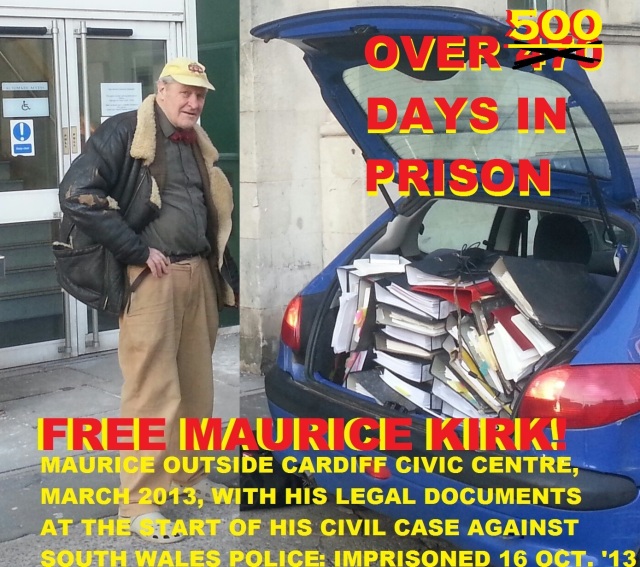