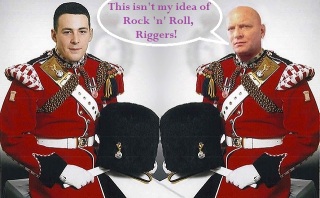 Chris Spivey is a dead man walking. Tragic news to his family, Chris Spivey has arrived at theterrible conclusion that the only way the Powers that Be can save themselves is to murder him while he’s in custody at Her Majesty’s pleasure.

Spelt out in crystal clarity in his latest article ’They Shoot Horses Don’t They,’ Chris Spivey proves beyond all reasonable doubt that not only is he is a victim of injustice, but he’s also earmarked to be murdered in Prison- in the not too distance future.

The first relates to ONE AND ONLY ONE Facebook message he sent on the 18th of July 2013 in which he was extremely polite and when he got no answer, did not attempt to contact the witness again.

The other malicious communication charge relates to a mock-up of a front page of the Sun newspaper, which was published on his Facebook Page.

(It’s interesting to note that “a Matt Taylor” was named in the court’s transcript as being the person responsible for posting the mock Sun newspaper front page. It has since been admitted that it was in fact posted by Lisa Pea, a member of Spivey’s administrative team.)

Chris Spivey maintains his innocence on this count claiming, “I DID NOT make this spoof page and never even acknowledged it. The person responsible posted it on my Facebook page that I do not have any dealings with in regard to things that people post on there.”

You would have thought the case would have been dismissed on these two points alone, but the miscarriage of justice runs deeper when we learn that the witness statements used to convict Spivey haven’t even been signed by those person(s) who wrote them.

Rather than shying away Spivey is maintaining his contention that all the witnesses who testified against him ARE’NT who they claim to be.

“All four witnesses are of easily provable dubious character with clear evidence relating to criminal behaviour.”

Here is what Spivey has to say on the subject:

The prosecution fought tooth and nail using one of the country’s top barristers to keep their OWN four witnesses out of court… Why would they do that?

My aherm, aherm Barrister ignored all that I told her as to why the witnesses should appear i.e their witness statements were a tissue of easily exposed lies and as such, were they to be repeated under oath would mean that they would have committed perjury. And in any event, the witnesses are not who they pretend to be.

I therefore knew that if the witnesses were made to appear then the trial would not have gone ahead… The case would have been dropped.

However, the Judge, completely ignoring the rule of law sided with the prosecution – ruling that the witnesses be spared being torn to bits on the witness stand – thus blatantly denying me the right to a fair trial.”

“THE WITNESSES ARE NOT WHO THEY PRETEND TO BE.”

Propabably the most controversial statement to make related to the Woolwich incident is the claim that virtually every personality involved was an MI5 inspired creation – a crisis actor!

Spivey plans to appeal his conviction but in doing so he knows better than anyone that he’s signed his own death warrant.

Over to Spivey who explains:

“An appeal means that the witnesses WILL HAVE TO APPEAR NO MATTER WHAT because the appeal will be held in a Crown Court with a jury and will be based on the above facts.

And like I said, had the witnesses been made to appear then the case would have been dropped, not least because the witnesses – as the Crown fully knows – are not who they claim to be, are of dubious character and have alleged easily provable lies in all four witness statements… Therefore, they now have a real, real crisis on their hands because unlike the trial, they can not drop the appeal hearing and if that goes ahead, then it is not an understatement to say that at the very least, the outcome has the capacity to bring down the government.

Therefore, the only way to stop the appeal going ahead – which they have to at all costs – is if I am dead… Hence the forthcoming prison sentence.”

“Guess who has been asked to appear at the Glastonbury Festival next year?

If I am still alive of course!

The following is a link to video footage of yesterday’s event in London where Dr Nick Kollerstrom handed a letter into the ministry of Justice in protest at the persecution of me and my family by the British Government.”

Bad news Chris found GUILTY and http://chrisspivey.org going to be taken down at midnight! This is VERY sinister

Conspiracy theorist ‘claimed Lee Rigby’s murder was a hoax and terrified his family by publishing their addresses online’ – D. Mail

By Steph Cockroft for MailOnline