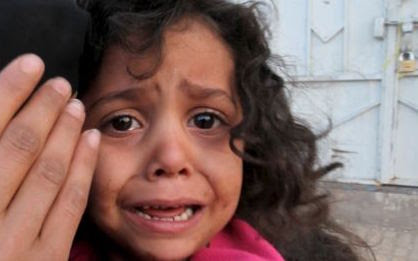 Saudi Arabia is bombing schools, hospitals, even weddings in Yemen. With weapons from Europe, the US, and Canada. But in 48 hours, the European Parliament could table a vote for an arms embargo. The Saudis are unloading massive pressure to block the vote. Only overwhelming public support can push this through. Sign the urgent petition:

They bomb schools, hospitals, even wedding parties.
What Saudi Arabia is doing in Yemen is disgusting — and they’re doing it with weapons they buy from Europe, the US, and Canada. [with money from the banks – UK BANKS INCLUDED!!]

But in 48 hours we can do the unthinkable — win a landmark decision that could stem the flow of weapons to the Saudis.

The European Parliament is two days away from having a proposed EU-wide arms embargo put to a vote — but under heavy Saudi lobbying, some politicians are wavering.

Now more than ever, these leaders need to see that people from every corner of the Earth are looking to them to stand up and say “NO” to Saudi Arabia and their atrocities.

This is how we can help end wars — by cutting off the supplies that fuel them. Calling for an embargo would have been unthinkable a few years ago because of western governments’ tight relationship with the regime, but this total disregard for human rights has made it impossible for them to look the other way. Europe could now vote for an embargo — they just need to feel the public is watching and cares.

A Saudi bomb killed over 200 family members at a wedding party, and a recent leaked UN report found that fleeing civilians were shot by helicopters — that’s an image hard to shake. Saudi Arabia started these attacks last year as part of a proxy war with Iran.
Both sides are guilty of appalling violence. And while this vote won’t end the carnage overnight, it will send a clear political signal that the EU won’t trade weapons with a regime that indiscriminately bombs civilians. From there we can begin to stop all governments from flooding this war with weapons.

The regime is not the only one benefiting from these deals. European arms dealers are making billions of dollars from the bloodshed in Yemen! If we don’t raise our voices these billionaires and Saudi Arabia will lobby to keep this horrific war going.

Wael*, an Avaaz member who’s survived daily airstrikes in Yemen, says that “history will remember those helping to bring peace.” Let’s come together now for Wael, his family, and millions of others.

Add your name — we have just days to help stop weapon sales to Saudi — then tell everyone:

What makes our community special is that we feel connections between each other and come together in massive numbers to bring change to issues that would otherwise be silenced. Let us come together now and do what we do best to help save the millions of Yemenis whose lives are on the line.

*To protect his identity, Wael’s name has been changed.

Avaaz.org is a 42-million-person global campaign network that works to ensure that the views and values of the world’s people shape global decision-making. (“Avaaz” means “voice” or “song” in many languages.)
Avaaz members live in every nation of the world; our team is spread across 18 countries on 6 continents and operates in 17 languages. Learn about some of Avaaz’s biggest campaigns here, or follow us on Facebook or Twitter.