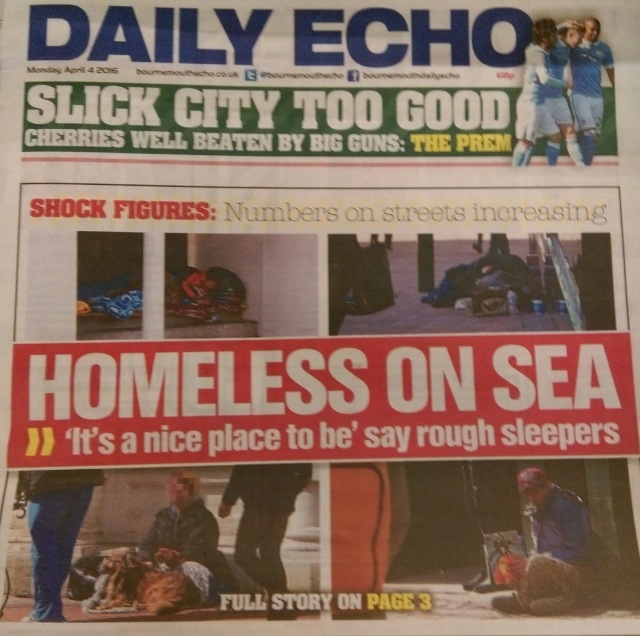 A PETITION calling for Bournemouth council to stop using bagpipe music as a deterrent for rough sleepers has attracted almost 4,000 signatures.
The authority has deployed the tactic of playing loud music at the Travel Interchange in a bid to reduce anti-social behaviour.
This strategy was adopted after reports that commuters felt intimidated by the growing number of homeless people drinking there and using it as a place to sleep at night.
But protestor Carla Johnson, who has recently moved away from the town to Essex, has launched a petition against the scheme, claiming it “goes against the morals of the majority of Bournemouth residents”.
“At a time of year when the weather is becoming increasingly cold and wet Bournemouth council should be finding a solution to help the homeless in our town, not to drive them away,” she said.
“Playing loud music at the interchange is in no way a solution as it will simply move the homeless people on to another area in the town.”
She added: “By offering no support, I believe the issues the council have with the homeless will only worsen.
“These people need our support, and not to be treated like wild animals, driven out of one area to the next.” Ms Johnson told the Daily Echo she plans to send the petition, which as of Friday evening had accumulated 3,804 supporters, to the council.
“I understand why the council has decided to do this in terms of giving the right impression to tourists,” she said. “But the people of Bournemouth are friendly people and this goes against their nature – nobody chooses to be homeless and we should be looking at different ways to help.”
A Bournemouth council spokesperson said: “The playing of music was done in this particular location in the town to address a very specific anti-social behaviour problem of intimidating begging and other issues.”   
The spokesperson also dismissed an accusation in the petition that the authority had recently closed a soup kitchen, pointing out it does not have the power to do this unless there is a food safety issue.
And cabinet member for planning and environment, Cllr David Smith, said: “The playing of music at the station is one tiny part of the wider approach which includes close working with the police and the use of enforcement measures where appropriate in order to motivate people to assist them in changing their behaviour. Alongside this, however, we always offer people the accommodation and support they need and achieve many successes with this as people safely move inside.”

Hope for Food is a Food bank and soup kitchen focussed in Bournemouth, where families can come and receive food, clothes and support. Claire Matthews, founder of Hope for Food describes the charities aims and pressures over the Christmas season, in this interview.
Are you busiest at this time of year, on the build up to Christmas?
Yes its really busy this time of year, we’re feeding at least 30 families each time, every Tuesday and Thursday evening, as well we work on Saturdays, we need to because there’s just so many people who need feeding.
Who is the charity aiming at?
We aim to help homeless people in Bournemouth particularly vulnerable people. Usually people in shared accommodation. People with a lack of heat or eat and we get help a lot of families as well.
How is Food For Hope making a difference?
If we didn’t feed these people, they wouldn’t eat it is as simple as that, we don’t act like a food bank providing hampers. We work differently, people who are under the breadline come to us and we feed them.
Do lots of people get involved?
We get loads of volunteers. At the moment we have up to 60, and we usually get an extra 30 for Christmas. If it wasn’t for the volunteers, then we wouldn’t be able to feed so many people.
Are you the biggest soup kitchen charity in Bournemouth?
I wouldn’t go as far to say we’re the biggest, but we work hard on a lot of nights throughout the week, and we’ve only been running for 2 years now.