STOP THE FRAUD ON THE COURT!! 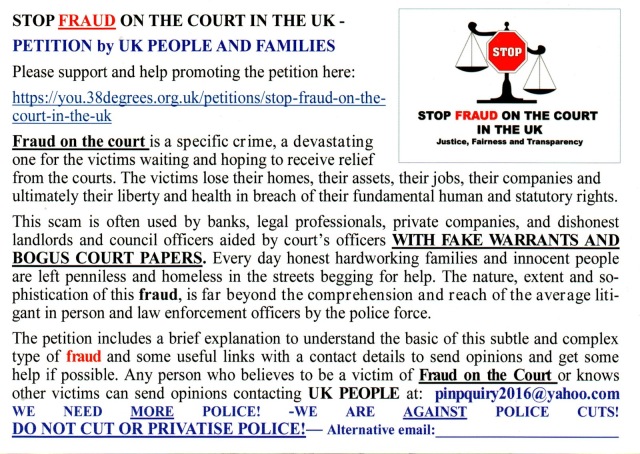 STOP FRAUD ON THE COURT IN THE UK

Flag this petition for review

UK FAMILIES AND PEOPLE INITIATIVE:
Ask the Secretary of State for Justice Rt Hon Michael Gove MP and Home Secretary Rt Hon Theresa May MP to investigate and put a stop to the serious organised crime of Fraud on the Court with a public scrutiny via a Public Inquiry.
The Public Enquiry is to establish people’s right according to the Protection from Eviction and Harassment Act 1977 and investigate fraud on the public purse and on the individual perpetrated against the Fraud Act 2006.
Fraud on the Court involves serious organised criminal activities such as:
1 – Court’s proceedings created without payment of the court’s fee to start fraudulent claims
2 – Production of fake warrants and bogus court’s orders obtained in full abuse of court’s process3 – Unlawful evictions and dispossession of families’ homes and assets often conducted using violence by private debt collector companies against innocent victims
4 – Refusal and failure by the police to record and investigate crime reports claiming that theft is a ‘civil matter’. Hence, there is no investigation into the scam by police or independent bodies leading to a fundamental breach of Human Rights for the victims left deprived of homes with all personal belongings and assets. This happens without protection and with no redress in full violation of the Tort (and interference with Goods) Act 1977.

Why is this important?

FRAUD ON THE COURT IN BRIEF:
Those instigating Fraud on the Court do not pay the court’s fees to obtain fake warrants or court’s orders used to deprive law abiding citizens stealing properties, land, money and assets. Invalid court’s papers are then used to secure unlawful entry and adverse occupation of residential premises by means of violence combined with the creation of a sense of authenticity through the invention of false court’s documents which appear to be factual.Fraud on the Court involves (with intent) a serious abuse of the court’s process and “contempt of court” (Common Law). The victims are routinely ignored by the already overstretched police and other law enforcement bodies who are unable to investigate thoroughly and independently.
No matter what undeniable evidence is provided, there is no redress for the victims who are told that this scam is ‘it’s a civil matter’. It is a matter of fact that when victims DO REPORT this crime NO ONE INVESTIGATES. The only option left is to go back in the hands of the same staff in courts who are perpetrating the scam.
FRAUD BY CONCEALMENT:
The victims are denied inspection and copies of data from the court’s file which remain concealed.Victims are also crucially denied access to and release of the computerised court records where all the documents and interactions with the court of any party into the proceedings are recorded.The nature, extent and sophistication of this fraud, is far beyond the comprehension and reach of the average litigant in person and law enforcement officers by the police force.
We are asking for the full support of: All Her Majesty the Queen’s servants who are designated to ensure a fair and just society against this serious organised crime. We are demanding urgently a Public Inquiry to investigate fully and independently the seriousness of the crimes involved by using Fraud on the Court.
The non-payment of the court’s fee is not only a major deception and fraud on the on the public purse but also on the individual. This theft on the public happens in a time when the UK court’s system is crying for more funds. The recent sharp increase in the court’s fees have already reduced considerably the access to justice for the most vulnerable that cannot afford to pay.Fraud upon the court is devastating for the victims waiting and hoping to receive relief from the courts. The victims lose their homes, their assets, their jobs, their companies and ultimately their liberty and health in breach of their fundamental statutory rights.
This adds burden on the already struggling NHS and Social Security systems whilst the income from many tax payers is lost. This scam is often used by banks, legal professionals, private companies, and dishonest landlords and council officers aided by court’s officers. Meanwhile criminal convictions and assets stripping founded on complex illegalities and irregularities send every day honest hardworking families and people left penniless and homeless in the streets begging for help.Innocent families and people are held hostage with children and frail old people ending up homeless and traumatised as victims of Fraud on the Court.
Those few victims of Fraud on the Court who persist in chasing justice are being passed between agencies without any result or redress. Stealing from people is a crime. Taking away their assets and homes making people homeless with Fraud on the Court is a very serious and sophisticated crime for which there is no defence for the victims. Fraud of any kind is a crime and Fraud on the Court is one of the worst. An unpunished crime encourages new ones. Those committing Fraud on the Court are still there and get away with impunity. It is only a matter of time before someone you know will become the next victim.In the public interest, in order to strengthen the fairness, accountability and transparency and in name of justice join by signing this petition for a Public Inquiry and ask for the Parliament’s full support to investigate and stop the Fraud on the Court in the UK.
Any person who believes to be a victim of Fraud on the Court can send their opinions contacting UK PEOPLE at a new email address to come as ODDLY our 1st email address has been hacked and the account disappeared mysteriously from Google…..Strange he…. ?!? Useful links:

The Protection from Eviction and Harassment Act 1977 –

Fraud on the Court – Evictees and families Unite:

The drama of the Jackson’s Family exposed on BBC –