I find, the civil court in Cardiff is refusing to properly co-operate in my lodging an appeal to the Royal Courts of Justice in advance of receiving either the police corrected judgment or judge’s sealed judgment of my BS614159 claim etc that are also continuing to be refused.
The court is also refusing to release court copy of the prosecution exhibits even at my expense.
New information has now come into my possession due to world-wide coverage in some of the above issues and in particular the machine–gun conspiracy that has caused me to be subjected to both imprisonment and the after affects of my police fabricated medical reports used or written by a Dr Tegwyn Mel Williams the then Chief forensic Psychiatrist of Wales.
The police, in Wales, have repeatedly refused to call in an outside police force to investigate, as does IPC (Wales), my serious criminal allegations concerning a number of ring leaders’ conduct, mainly based in South Wales, now directly adversely influencing HM Judiciary (Wales) and Royal Courts of Justice.
I enclose my MG11 Machine-Gun witness statement in my civil claim !CF03361 that even His Honour Judge Seys Llewellyn QC is now appearing to refuse to progress, these past six years or pass on to another judge anywhere in the UK
——————————————————————————————-

Inspector Rice or I Will →

Posted on September 9, 2016 by mauricekirky

FOR SIX YEARS THE CARDIFF CABAL HAS BLOCKED PROPER IVESTIGATION

Crown Prosecution Service (Wales) has deliberately withheld, for three jury trials and for the original utter nonsense harassment conviction many important defence witnesses and this letter, below, which is why CPS and police so fervently opposed, every time, my bail applications to keep me locked up in Welsh prisons unable to properly prepare for either civil ligation or criminal hearings, the whole purpose of the Barbara Wilding MAPPA Machine-gun conspiracy in the first place.

Police make me in top 5% most dangerous in the country as a MAPPA 3/3 victim for Ministry of Justice’s printed libel, below, just to influence each jury, Royal College of Veterinary Surgeons designed purely to successfully oppose my bail applications as exactly was the case to have me locked up for months prior to my machine-gun acquittal Judge/CPS/police conspiracy when no defence evidence was even tendered. 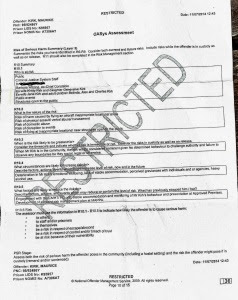 I now understand from both HM Crown Prosecution Service and Criminal Cases Review Commission, following the disclosure of new evidence, some of which was referred to by Dr Tegwyn William’s solicitor to the police some time ago without my knowing about it, I have plausible argument that the purported ‘restraining order’, never served on me in the first place, should be quashed.

As I am also to go abroad I would be grateful for an early date in order that I may attend in person.

Court Appointed lawyer does not have the evidence that is essential for the cross examination of Dr Tegwyn Williams.

1. Time is needed to organise evidence in support of the defendant Mr M J Kirk that is essential for court appointed lawyer to use in the cross examination of Dr Tegwyn Williams to expose Dr TW unusual dishonesty and malice.

2. On 1 May 2012, the day before trial, the Crown Court told me they had they had asked Apex Chambers to provide Counsel as the Court appointed lawyer, but no decisions had been taken on who would act. I need to provide very complex papers and there is now no time.

3. I believe to proceed without my evidence that is needed to cross examine Dr TW would bring the administration of justice into disrepute.

4. I ask that proceedings switch to focus on a re-trial of the original conviction of December 2011 & 1& 2 March 2012 because my evidence has been hidden from the Courts for their fair deliberations – despite my writing to the Crown Prosecution Service and attending both Magistrates Court and the appeal at the Crown Court. I was prevented from giving evidence on both occasions by improper ‘goings on’.

5. The matter is so complex and lengthy I merely give the direction of my evidence at this time, and ask for time to submit more.

The direction of my evidence.

7. As in my attached letter to Mr M Curry Head of Unit at Cardiff CPS and a much fuller letter to Keith Starmer, Director of Public Prosecutions I can explain why Mr Kirks actions are reasonable and lawful and that not only should Mr Kirk not be convicted, but that Mr Kirk should not even be prosecuted.

8. I wish to explain why I believe Dr TW and parties are dishonest and malicious.

9. Please see where in the transcript of 1 March 2012 Dr TW tries to imply he has no one else objecting to his actions, when I have had take Dr TW to the High Court over his endless dishonesty and now seemingly a breach of his undertaking to the High Court. Dr TW and parties have interfered in Cardiff NHS very much to try to stop me complaining to the General Medical Council about him.

10. I have had disclosure of Caswell Clinic papers to confirm that a multi agency committee has been meeting based around Caswell clinic to prevent anyone lawfully complaining to the General Medical Council about Dr T Williams. Before Mr Kirk’s alleged harassment charges took place, the committee detail how they aim to get those who complain about Dr T Williams imprisoned for many years. My and Mr Kirk’s initials are on the heading of the emails that organise the agenda of these meetings. (I have no criminal convictions/cautions by 55 years and am a well qualified professional man.)

11. The Caswell clinic multi agency committee seems to have unreasonable influence and control over the Courts, CPS and Mr Kirk’s custody at Prison, to seemingly pervert justice.

12. I am presently organising the complaints to the GMC for both Mr Kirk and myself. The GMC have confirmed that the GMC legal team have approved a larger than usual investigation will occur regards my complaint. I now start to explain the GMC about what Dr T Williams does wrong regards Mr Kirk:-

a) Maliciously denying Mr Kirk access to Caswell Clinic when the staff team of the Caswell had decided in writing that they wanted to build a therapeutic relationship with Mr Kirk. Yet when Mr Kirk would approach Caswell for staff to have opportunity to draw him in, Dr T W maliciously and dishonesty called the police etc.

b) I believe that Dr T W did this because Dr T W cannot discuss the close detail of clinical reports on Mr Kirk because the reports are seemingly malicious and unusually dishonest. Dr TW calls police and falsely alleges harassment to try to cover up exceptional wrongdoing of in bad faith trying to deny Mr Kirk’s liberty indefinitely.

c) That Dr T W refuses to receive questions and information to clarify or correct his reports. Dr T W refused to make a statement to explain himself in civil proceedings, to imply guilt.

Mr Justice Beatson saw an extract of what I believe Dr TW ‘made up’ about Mr Kirk.

13. The evidence I wish Dr T W to be cross examined on is seemingly reliable of genuine concern. When I shared what I knew with Mr Justice Beatson on 19 January 2012 sitting at Cardiff Administrative Court he said in Judgement:-

“Some of the allegations that the Claimant (myself) makes about CPS policy, if supported by evidence, would be very serious. Today he has given me a swatch of papers about Mr Maurice Kirk, a litigant who is well-known in these courts. Mr Edwards relies on what he says is evidence that it was said that Mr Kirk was mentally unfit and had brain damage, which a summary of Mr Kirk’s record based on a surgery home visit report shows was not true.”

14. I wish explain why Mr Kirk has not yet had a fair trial to explore what Mr Justice Beatson describes as “very serious” and “a ….report shows was not true”. Yet both the Crown Prosecutor and the Court appointed lawyer withheld my evidence from the appeal at Cardiff Crown Court. There are also more complex reasons why my evidence was withheld from the Court(s). I believe the Courts need to now switch to a re-trial and for the “first time” to explore how Dr T W and parties do wrong to Mr Kirk.

15. As for example is in the attached one page extract of recent papers lodged at the High Court 18 April 2012, I am asking the High Court to refer the abuse of power (such as in Mr Kirk’s case) and where there is no Remedy for that abuse, to the Supreme Court.

Where the ‘buck’ finally stops:

Just one of the many versions of redacted/re-written police and court records one tends to find in Cardiff after decades of my life wasted by trying to simply practice veterinary surgery in South Wales that has still not managed to fiddle judicial autonomy and its own police force. 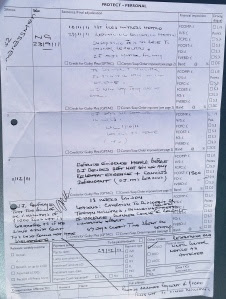 Even the Criminal Cases Review Commission (CCRC) have been gagged.

AND what about my confiscated custody interview tape re ‘garrotte type instrument’ used on HRH Prince Charles’ farm?

This part of the tape transcript to get me goaled as ‘unidentifiable’-later, when I can find it!

Posted on September 9, 2016 by mauricekirky

I now understand from both HM Crown Prosecution Service and Criminal Cases Review Commission, following the disclosure of new evidence, some of which was referred to by Dr Tegwyn William’s solicitor to the police some time ago without my knowing about it, I have plausible