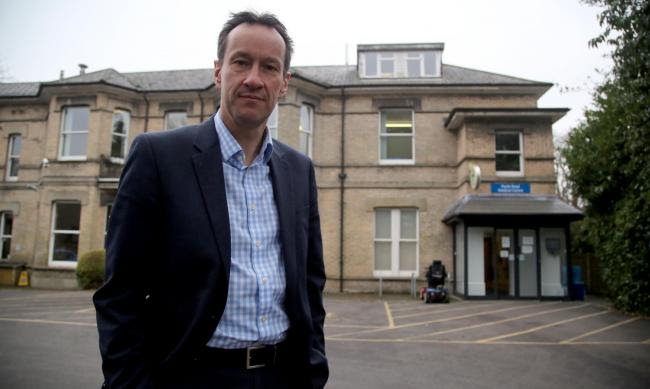 Dr Tim Alder of the Poole Road Medical Centre who is an NHS GP and is now set to launch a private GP service at the practice. ..
.
1 day ago / Tara Russell  – 127 comments
.

AN NHS GP surgery is the first in Dorset to set up a private service where patients can pay up to £145 to skip waiting lists to see a doctor.

Dr Tim Alder has warned general practice is on ‘the brink of collapse’ and ‘heading for privatisation’ and has launched Dorset Private GP Service at Poole Road Medical Centre in Bournemouth.
The NHS practice will continue to operate and current rules ban GPs from charging their own patients for any treatment as this is deemed to be a conflict of interest.

Currently NHS patients there wait four weeks for a seven-minute appointment with one of the practice’s four doctors if they are not eligible for its same-day walk-in service.
However the new private service will be operated by the same NHS doctors from 8am until 8pm Monday to Friday and 8am until 12pm Saturdays. It boasts same-day, ‘unhurried’ and ‘personal’ care ‘rather than the rushed NHS clinics that the cash-strapped service is encouraging.’

It comes at a cost though. A ten minute phone consultation is £40, a 20 minute face-to-face appointment, 13 minutes longer than the standard NHS one, is £80 and patients must pay £145 for a 40 minute consultation.

Critics have slated the move as a ‘kick in the teeth’ for NHS patients and NHS colleagues, arguing it creates a two-tier health system and goes against the NHS principle of reducing inequalities in healthcare.

But Dr Alder said with a crisis in general practice due to increasing demand, a recruitment crisis and lack of funding as well as news that private provider Virgin Care is taking over practices across the country, the private service is the only way to safeguard its future.
“The Government is not trying to save general practice and now it is on the brink of collapse. But when it’s gone, they’ll realise how good we have been at blocking access to the hospitals. By then, it will be too late.
“We have to try something different now to make ourselves stronger in anticipation NHS primary care will be even worse. The worry is that Virgin Care, who are already buying up practices, are going to come in and would then just take us over. I suppose we’d rather be in charge of our own destiny.

“Five years ago, there would be far more people saying ‘how dare you do this to the NHS’ and ‘you’re causing it to fall apart by doing this’ rather than the other way around but now most people understand why and are quite interested. They see it as an option for the future for themselves.”

The doctor said he hopes the private service will help relieve colleagues waiting lists and said the NHS practice will continue to operate as normal.
“I’d love to be able to say you can have 20 minutes with me on the NHS but that is not going to happen until we have twice as many GPs.
“We certainly won’t be using NHS resources, we’ll use ours which means if we do it in NHS time, we’ll find cover for that.
“We’ve got to keep the NHS working here, that’s our desire and we will do our best for our NHS patents.”

As revealed in the Daily Echo, ‘super-surgeries’ with up to 50,000 patients could be introduced in a radical shake-up of GP services.
In a draft report of its Primary Care Commissioning Strategy and Plan, Dorset CCG proposed a new ‘integrated GP model’ which could see the number of GP surgery sites more than halved in the county from 131 to between just 36 and 69.
In central Bournemouth alone 10 sites, used by seven practices, could be reduced to just three.

As reported, already two practices have merged in the county.
Dr Alder warned 25 per cent of GPs in Dorset are going to retire in the next five to ten years and for the first time ever GP training posts in Wessex were not filled. He added there are around six practices in Dorset working with ‘very few GPs’ who are ‘coping but only just.’
If these close, waiting lists will get longer and longer, he added.
Meanwhile prime minister Theresa May blamed GPs for being a cause of the crisis in the NHS and hospital pressures – and said GP practices would be required to open seven days a week or face funding cuts.
But the doctor, who has practised for 18 years, said doctors are already working 55 hour weeks and a seven day service would ‘dilute care.’
“Those comments really alienated a lot of GPs,” he said.

“We believe quality general practice is vital in any modern and increasingly complex health service as a means of steering and supporting people through the often confusing health paths.
“Sadly the NHS is no longer prioritising it and we can see a time when traditional GPs are private and the majority of patients are instead seen in clinics based in hospitals like minor A+E departments. The personal touch and the ‘whole patient’ knowledge will be lost.
“With the NHS struggling to offer any more than a minimum level of service, now is the time to choose a private doctor.” A spokesperson for NHS England said: “General Practitioners provide a comprehensive primary care service to patients through contractual arrangements with NHS England. Strict safeguards exist within these contractual arrangements and GPs cannot charge patients for NHS care and services, which are free at the point of delivery.” Tim Goodson, chief officer of Dorset CCG, said: “We will continue to be commissioning GP services. In fact, the NHS nationally is putting in a lot of investment into primary care and GP services over the coming four years. I think GP services have been the backbone of the NHS since its inception. I don’t see that changing. The vast majority of people’s contact with the NHS is with their GP practice and that will continue.”

Healthwatch Dorset brands decision a ‘kick in the teeth’

A HEALTH watchdog has slated a private GP service set up by NHS doctors branding it ‘a kick in the teeth’ for NHS patients and colleagues.
Healthwatch Dorset has raised fears Dorset Private GP Service set up at Poole Road Medical Centre will mean those who can afford to pay get ahead, while the less well-off suffer.
They say it contradicts the founding principle of the health service – that healthcare is free to all at point of delivery.

Martyn Webster, manager of the health regulator, said: “At a time when we are hearing so much about how overworked GPs are and how they don’t have time to give their patients the care they need, it seems that some actually do have time to spare and that time is for sale to those who can afford to buy it. What a kick in the teeth both for their NHS patients and for their NHS colleagues.

“NHS Dorset Clinical Commissioning Group and the Care Quality Commission need to keep a close eye on this practice to make sure that the standard of NHS services there doesn’t suffer because of this new private venture.

“This is a time of unprecedented pressure on our NHS. And it’s the time for us all to pull together to protect it and make sure it’s there for generations to come, together with its founding principles that everyone has the right to the best possible care and access to that care is based on clinical need, not on the ability to pay. Our local NHS often talks about their commitment to reducing inequalities in healthcare, this goes against those promises and does nothing to calm people’s fears for the future of health services across Dorset.”

“Just another scam.
My GP nearly killed me with his professional negligence over 3 years – I still have to deal with connected serious ailments as a result. The GMC, NHS UK, Dorset Advocacy etc. did nothing – all protected the GP and his cronies at the surgery. Disgraceful.”