“It beggars belief ….I am not even  allowed to register and pay a fee to have the police interview and custody records sent to me by  email in order to take advise prior to 10am hearing in Cardiff Crown Court when facing a compulsory plea!…. My tel 07708586202

Now the Crown Court refuses my registration to obtain the above data by email NOW. Tracy says it is for the Crown Prosecution Service to register me. So, ringing them they say oh no, it is not us! who then, no answer. So who is it? Some one is lying…not unusual  in Cardiff courts……All a game to blackmail and cause a deliberately costly adjournment for me by they know, to screw my proposed return next week for my already costly   flight back to Africa for onward flight to Cape Town in my WW2 D-day Piper Cub ….evil little sh…

Yesterday I had to travel from England to CPS (Wales) just get some of the stuff on paper but not the most relevant, of course.”

I have now been arrested. Please study  my substantive proof  on all my and other’s websites….

I enclose that self-redacted part of the proceedings you were prepared to release for internet.

And all from the 1970’s borrowing of Taunton’s Chief Superintendent ‘Curly’ Hawkins’ personal note book.

‘Borrowed’ for a court exhibit by gaining access through this back door, below, in order to effectively win and expose in the national press a highly hilarious ‘fire arm’s conspiracy allegation against me and as ridiculous, if not as disgusting, as the South Wales Police’s ‘machine-gun’ Cardiff courts and CPS are so ‘hell bent’ on covering up. 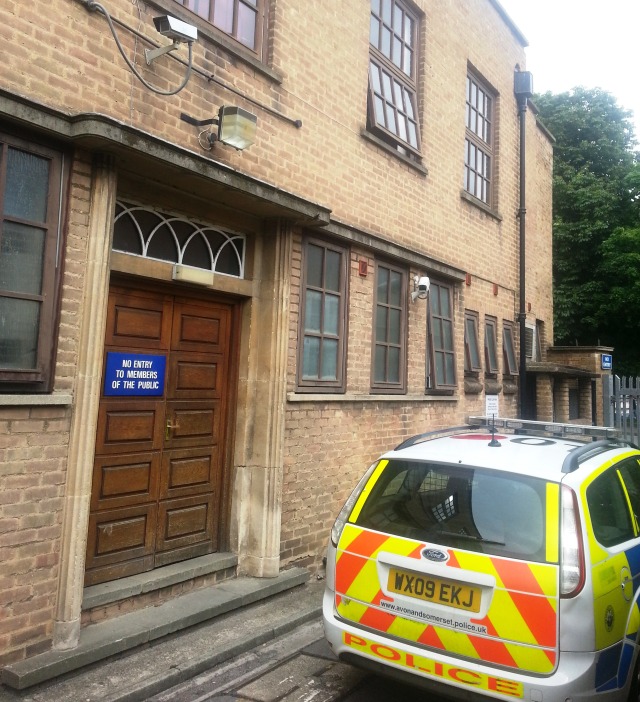