OUTRAGEOUS! Sheila Griffin: “Mother-of-four, 36, killed herself after she lost custody of her children when she was wrongly accused of having sex with an underage boy” – Daily Mail 19/04/17

The support worker, from Rochdale, was cleared of child sex offences in 2014

By Paddy Dinham For Mailonline
Published: 08:30, 19 April 2017 | Updated: 16:20, 19 April 2017
.
Support worker Sheila Griffin, 36, had been acquitted of sex charges following a trial by jury, but three of her four children had already moved in with their father and she had to fight him for contact, an inquest heard.
After battling depression and following four attempted overdoses, Mrs Griffin, from Rochdale, Greater Manchester was found dead in bed by her grandmother.
In the run up to her death on October 15 last year she had complained of being let down by the system and had been admitted to a psychiatric hospital saying she had ‘to get help to face her demons that she just couldn’t fight alone.’

Two days before the tragedy she had been trying by text to arrange a visit to see her children at their home in Edinburgh.
The hearing was told Mrs Griffin was a ‘good mum and a lovely person’ and had enjoyed playing rugby in her teens. She was with husband Chris for 18 years having met him when she was just 14.
But after they split up, she was accused of sexual activity with a child in 2012. She had to face trial at Minshull Street Crown Court, Manchester, before being found not guilty in 2014.
Mrs Griffin’s grandmother Sheila Noakes told the Heywood hearing: ‘Sheila was a bubbly but passive person and had difficulties sticking up for herself.

‘Her ex husband Chris had the children every other week but that contact and access was not an easy arrangement and Sheila had difficulties communicating with him.
‘That deteriorated and he would not communicate with her at all. Then in 2012 allegations were made against Sheila for criminal activity. Although she was found not guilty, she could never talk about it.
‘It also had an effect in terms of her family arrangements because around this time Chris was given temporary custody of the children. Chris got custody because the children had to be with him and it was not Sheila’s fault.
‘As a result of Chris getting full custody Sheila began to drink more and take painkillers.
‘After that Sheila had difficulties maintaining contact with the children. Chris made it really hard for her. The most obvious trigger was when she had contact with her ex husband and she would go on a real downer.’
Mrs Noakes added: ‘She couldn’t talk about the allegations and couldn’t bear us to talk about it. The fact she couldn’t see her children and there was no cooperation from Chris, you have to cooperate when you have children.
‘She could be very good at hiding what she was feeling as well. She didn’t even get the chance to fight for her children.’
‘In terms of Sheila’s mental health during 2016 she attempted to take her own life on four occasions.
‘I asked her why and she said it was because she was forced to speak to the children on the phone. The lack of contact with the kids really hit her hard.
‘She loved her children very much, it was heartbreaking for her family and friends to see her trying to cope without having her children around her. She is very much missed by all of the family.’ 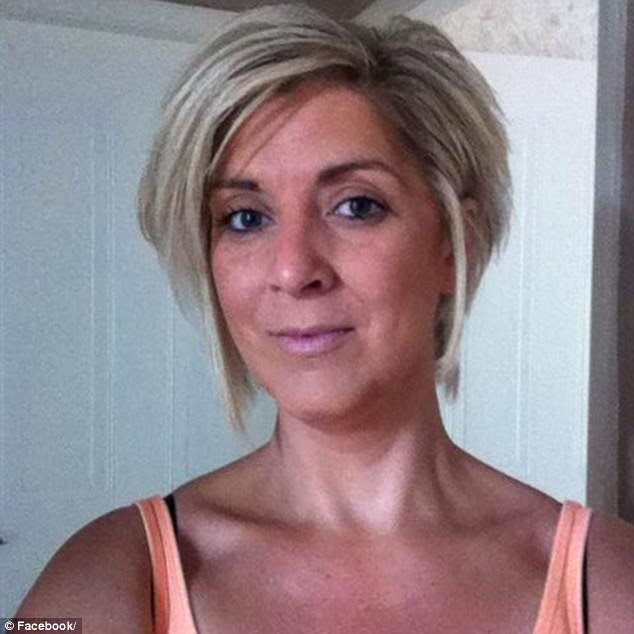 After splitting with her husband, she was falsely accused of sexual activity with a child in 2012
Mrs Griffin’s mother Debbie Brown told the hearing: ‘The serious allegation made in relation to Sheila had a profound effect over the two years whilst criminal proceedings were on going. She was found not guilty but during this time there was arrangements made in relation to custody of Sheila’s children.
‘Chris had custody of the children and it was difficult in arranging visits to take place. I felt Chris was not as helpful or accommodating as he could be. He obstructed visitation if anything.
‘During this time Sheila was very low in mood in part due to the difficulties in having contact with her children.
‘She attempted suicide and reported feeling let down. She fought every day and she tried to fight for her children every day.’
Mrs Griffin was said to have first started showing signs of depression as a teenager and suffered post-natal depression after the birth of all four of her children.
In 2008, while working at Highfield Hospital in Rochdale, she fell and fractured her skull.
The accident left her with brain damage and epilepsy and meant she was required to take the painkillers to which she eventually became addicted.
Mrs Brown added: ‘When I last saw Sheila we had a lovely day together. She was looking brilliant, smiling, buying things ready for the new accommodation she was hoping to move into. I had no idea she had any negative thoughts or was considering the possibility of taking her own life. 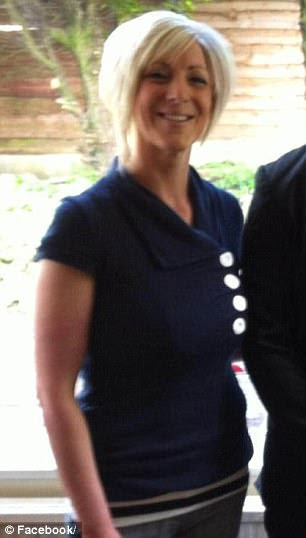 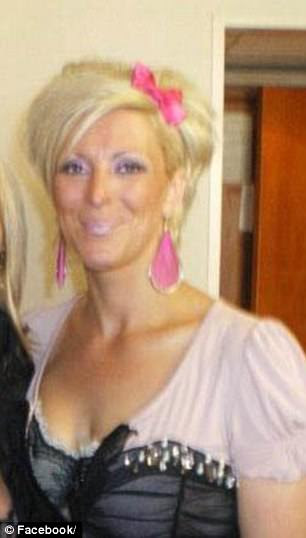 Two days before the tragedy she had been trying by text to arrange a visit to see her children at their home in Edinburgh
‘She a was very creative and loved making costumes for the kids and painting with them. She also made the best carrot cake ever – she loved spending time with her kids.
‘I’m devastated and heartbroken over the loss of Sheila. I feel she was let down many times she and the family were screaming for help but I feel we were not listened to. She was a good mum, a lovely person and loved her children very much. She tried to fight for her children every day.’
Dr David Rimmer, a consultant psychiatrist at the John Elliott unit of Birch Hill Hospital said: ‘Whilst there’s an ongoing risk of harming oneself there’s only so much mental health services can do.
‘I was aware of the criminal allegation and I know it was a major upset and a major trauma. The problem we have is we can be aware of things but what can we do about them? She didn’t like talking about it in a way that possibly some form of counselling might have helped.’
Passing a conclusion of suicide, assistant coroner, Peter Sigee said: ‘I’m satisfied Sheila acted with the intention of ending her own life. Please let me express my condolences and sympathies to all family and friends. I hope it may prove to be a stepping stone on the road to coming to terms with her death.’

Sheila Griffin, 36, begged for psychiatric help following a history of mental health problems, self harm and depression, an inquest heard 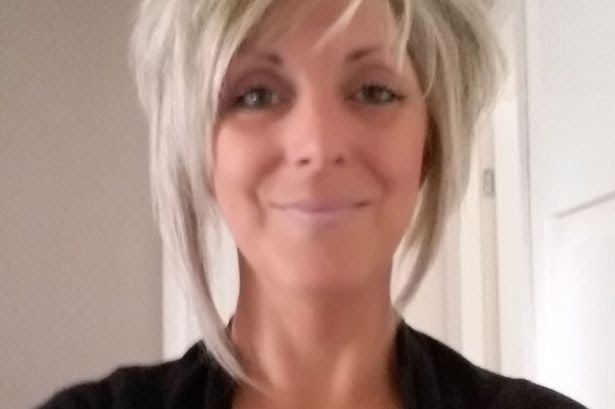 Sheila Griffin died at her grandmother’s house on October 15 last year (Photo: Manchester Evening News)A mum-of-four killed herself after falling into a downward spiral of depression when she was wrongly accused of having sex with an underage boy, an inquest heard.

Sheila Griffin, 36, was cleared of the charge two years ago but the criminal investigation had a “profound effect”, a coroner was told.

Mrs Nokes said: “The criminal investigation had a profound effect on her. She couldn’t even talk about it.
“Then after losing the custody case she began to nosedive.”

Mrs Griffin, who was originally from Littleborough, was found dead at her grandma’s home in Kirkholt, Rochdale, on the morning of October 15, last year, after taking a lethal overdose of medication.
She also drank excessively and was addicted to painkillers.

Mrs Griffin was said to have first started showing signs of depression as a teenager and suffered post-natal depression after the birth of all four of her children. In 2008, while working at Highfield Hospital in Rochdale, she fell and fractured her skull.

The accident left her with brain damage and epilepsy and meant she was required to take the painkillers to which she eventually became addicted.
In 2016 her depression worsened and she attempted to kill herself on four occasions, the inquest heard.

Following two of those attempts, on September 2 and September 29, she was admitted to the John Elliott mental health unit at Birch Hill hospital in Rochdale.
She took her own life on October 15 last year, just 10 days after being discharged from the unit for the second time, it was said.

Mrs Brown told the inquest her daughter was found not guilty of having sex with an underage boy, but that the case had ‘a profound effect’ on her.
She said Sheila’s death left her ‘devastated and heartbroken’ and described her as a ‘good mum and a lovely person’, and said the family had concerns about the care given to her daughter.

She said: “She begged for psychiatric help, she begged for it, but she was told that it was normal to try to take your own life. She was screaming for help but she wasn’t being listened to. She was let down time after time.”

But Dr David Rimmer, consultant psychiatrist at the John Elliott unit, said Mrs Griffin’s drinking and painkiller addiction combined with her reluctance to talk about the court case made it extremely difficult to treat her.

Dr Rimmer said a ‘multi disciplinary review’ carried out on October 3 found Mrs Griffin was ‘stable’ and could be discharged.

He added: “The problem we had is that she did not like talking about the court case in any way that some form of counselling might have helped. If somebody does not want to talk about something it is very difficult to bring it out. It needs to be done over a very long period of time.
“I do not know what more we could have done.”

Assistant coroner Peter Sigee recorded a conclusion of suicide.
He said: “It would appear to have been an impulsive action without any warning or indication to those who loved her.”

If you are suffering problems in your personal life and need somebody to talk to, call the Samaritans on 116 123. Lines are open 24 hours a day, seven days a week.

4 hours ago – A mother of four killed herself after she lost custody of her children … Sheila Griffin, 36, was acquitted following a trial by jury but during the …

Results 1 – 10 of 24102 – Obituary notices in United Kingdom for “SHEILA GRIFFIN“. Search our archive of obituaries, death notices, memorials and …

10 hours ago – Sheila Griffin, 36, begged for psychiatric help following a history of mental health problems, self harm and depression, an inquest heard.

Mother killed herself after losing custody of her children | Daily Mail …

9 hours ago – Support worker Sheila Griffin, from Rochdale, Greater Manchester, was acquitted of sex charges, but her children had moved in with their father …

Tragic mum-of-four, 36, killed herself after losing custody of her kids …

9 hours ago – MUM-of-four Sheila Griffin committed suicide after being wrongly accused of having sex with an underage boy and losing custody of her kids.