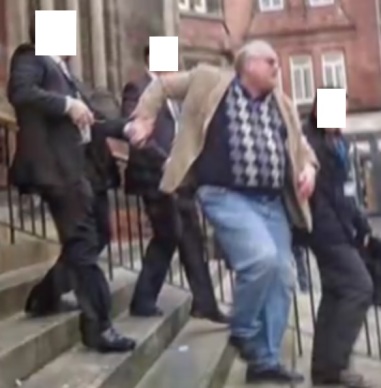 Before SIR ALAN WILKIE sitting as a judge of the High Court
Wednesday 14 June, 2017

above: Peter H. being taken away from a bogus court hearing in York on Dec. 4 2014 he was lured to – he was been in custody ever since [except for a couple of weeks]. He is at present in HMP Preston now awaiting the extradition hearing to send him back to Austria.

The authorities in Austria have not even medically examined him but have issued an order stating he is medically unwell. He owns a house in Austria and it is alleged the PTB both here and there want to the proceeds of the sale from P’s house, and a way to get it is to divest him of his legal rights by making him seem medically unfit to cater for his affairs by way of a court order  and possible incarceration in a closed mental unit – which will allegedly be confirmed by the authorities in Austria once he is ordered back there by a UK court – hence the extradition hearing on the 14th in London at the Royal Courts of Justice, the Strand. It is imperative P keeps his human rights at all times and does not have them removed by way of any dubious order – anywhere.  See the background to this case overall [including the shocking “GRANDMA B” [P’s mother] case] which has been ongoing many years = PETER HOFSCHROER: EXTRADITION + APPEAL + GRANDMA B CASE: timeline +archive 25 Jan. 2017 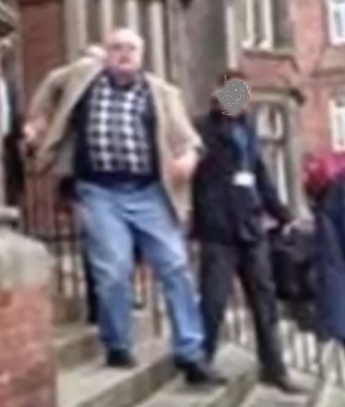 This is an URGENT APPEAL for us all to unite at the Royal Courts of Justice in London, UK, on Wednesday 14 June, 2017 to show our support for a well-loved British man, military historian and author, Peter Hofschroer.

(Court Room and time to be confirmed nearer the time. Please keep checking back.)

https://www.justice.gov.uk/courts/court-lists/list-cause-rcj#COA-Criminal
for details and updates of the exact time time for the appeal hearing in the xxxxxxxx v Hofschroer case

Friends and supporters of the acclaimed author and historian and his mother, Barbara (aka Grandma B), are asked to attend his appeal against extradition to Austria. He has been unlawfully sectioned under mental health legislation in Austria by a single judge who has never met him, and WITHOUT A MEDICAL EXAMINATION. They want to incarcerate him forever in a mental institution and force him to take psychiatric drugs because he has been speaking out publicly about public corruption in York and North Yorkshire (place that he refers to as “Savile Country”), and other places. Please see details here: http://www.grandmabarbara.co.uk/
It is no surprise that North Yorkshire Police and the others have been desperate to silence him (at huge cost to the public purse).

THERE IS NOTHING WRONG WITH HIM! HE IS A BRILLIANT INTELLECTUAL!
It is important that the authorities know that the hearing is being witnessed by the public. Stop the star chambers in the UK. Stop them from taking SECRET ACTION against this wonderful kind and loving son of Barbara Hofschroer.

It also is known that his beloved 87 year old, wheelchair-bound Mum is grieving for him, thanks to York Social Services and the Court of Protection. She wants desperately to be reunited with with Peter, her loving son. Please don’t let her end her days without Peter, who had been caring for her every need, 24/7, until disaster struck. She is incarcerated, against her will, in Haxby Hall, Yorkshire. She would surely enjoy cards and letters of support from you.
See the Grandma B Blog: http://www.grandmabarbara.co.uk/
Please do your utmost to get AT LEAST 700 people to Royal Courts Of Justice. Use Facebook, Twitter, and everything you can to get the word out.

He has been persecuted across three national borders.

This is serious. Peter is a BRITISH-born man who should not be extradited from his homeland, especially on trumped up ‘firearms’ charges over possession of harmless antique firearms that he used for historical re-enactment in battles.