Judge Fulford presided over Roger Laing 2015 Oct 2 Court of Appeal  [7] No aspersions are being made about whether the right decision was made in this particular case of child abuse.

However the appeal brought to mind that Judge Fulford was accused in 2014 by the Mail of backing the Paedophile Information Exchange PIE and being in groups that supported it. High Court judge and the child sex ring: Adviser to Queen was founder of paedophile support group to keep offenders out of jail [8]

He has apologised for some of his links but says he has no memories of others, states the Guardian,  Judge apologises for involvement with NCCL group linked to PIE [9]

The Mail on Sunday states “But he said he had “no memory” of being a founder member of the Conspiracy Against Public Morals, which continues “was set up to defend PIE leaders facing criminal charges.”

An official investigation by the Judicial Conduct Investigations Office took place by Lord Kerr of Tonaghmore. It concluded on 18 June 2014, that the allegations against Fulford were “without substance” and he “was not and had never been a supporter of PIE or its aims”. Following his exoneration, Fulford resumed sitting as a judge on the full range of appeals [10]

Unfortunately the Ministry of Justice and the Judicial Conduct Investigations Office have not been transparent about the investigation.

They issued a dismissive press statement [11a] and below, stating that Fulford was exonerated after after two “lengthy” interviews with “searching questions” put to him by fellow Justice, Justice Lord Kerr, a Justice of the Supreme Court of the United Kingdom to which Adrian Fulford reponded! 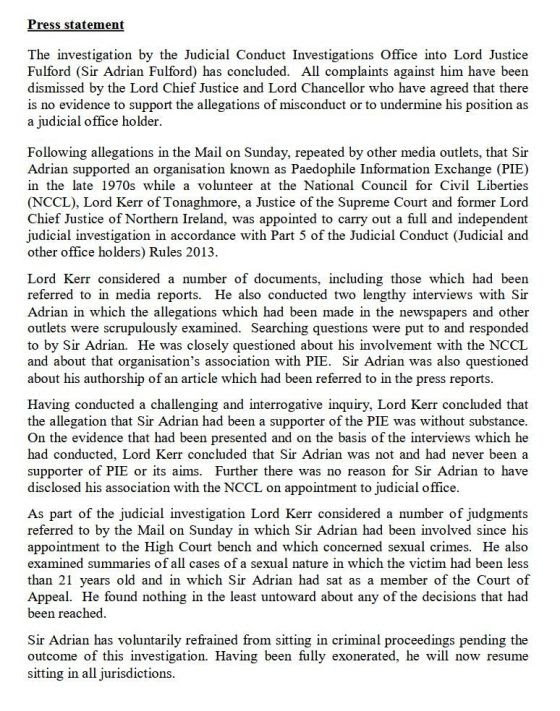 How much easier if their names were given as well..

The Ministry of Justice has refused to publish a copy of the report on grounds of confidentiality and personal information [11b]. They even took the statement down from their website after a year as revealed by this FOI request [11]

Whilst the Mail group is often gossip from the gutter, the MOJ / Judicial Conduct Investigations Office unheaded, undated and unsigned statment is breathtaking in its arrogance.

It does not even address the issue of group that Adrian Fulford is supposed to have founded – “Conspiracy against Public Morals” which supported PIE. 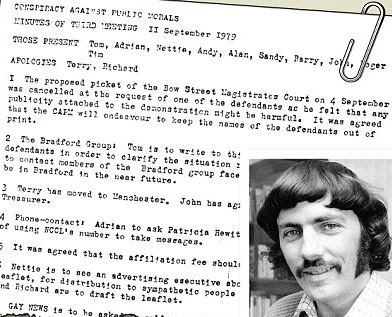 It is not denied that Fulford (Adrian) was there at the third meeting on 11 Sept 1979 nor even that he founded the group. In October 1979 the Mail says Fulford wrote a full-page article in gay rights magazine Broadsheet, in which he was described as ‘the founder’ of the PIE support group.

Among those also attending the 11 Sept meeting were Sandy Marks and Tim Brown.

Sandy Marks and Tim Brown were both members of the radical Fallen Angels collective who according to Charlotte Russell, the pre-eminent researcher in this field, “the Fallen Angels took it upon themselves to call the Gay Movement to account, their final three sentences underlined concluding their case” [16]

Tim Brown wrote “Show me an adult who is not a paedophile…Sex with children is wonderful… Children are wonderful they should not be subjected to any kind of guilt trip or legal shit about their bodies and their sexuality. It is theirs and nobody else’s.” Tim Brown, London N19 [16]

Sandy Marks chaired the Islington social services committee during the children’s homes scandal of the 1990s, attended a conference with a radical pro-paedophile activist group called Fallen Angels in 1980.

Her other paedophilic  links are explored in this article Islington kids’ homes scandal: Shame of ex-mayor Sandy Marks’ pro-paedophile past [17]

“.. Islington had become a focal point for the politicisation of paedophilia,” said Ms Russell.

Although Adrian Fulford is reported as saying that Tom O’Carrolls presence ‘left me feeling extremely uncomfortable’, he does not mention that the Fallen Angels made him feel at all queasy.

Sandy Marks has said various things about the time, one of which is she cannot remember events of this time due to illness. Islington Council have said they are shocked and that there will be an investigation by a “top lawyer”. It is not clear who the “top” lawyer is, or how “top” they will be, whether the investigation has begun or when the Report will be published.

It is essential that Adrian Fulford must give evidence to this inquiry. He clearly would have first hand evidence, from the inside, of what happened at the time. Perhaps he could be “top witness”.

Clearly if someone of his position does not give evidence, then the Islington investigation cannot be remotely to be said to be a thorough investigation. It would be negligent not to.

It would also be very interesting as to what Sandy Marks might have to say about Adrian Fulford..

As long as the MOJ is secretive and dismissive, and justice is not seen to be done then there naturally will be suspicions. The public obviously do not know the detail of what was considered, but would be right to demand further information. Is it right that Judges investigate themselves and then publish the report? These Judges could even be friends.

The MoJ adheres to the requirements of the Children’s Acts 1989 and 2004. To establish whether the information was held I conducted a thorough search, and made enquires within Judicial Office as well as Civil and Family Justice Policy areas.  It may help if I clarify that the information being requested is not held by MoJ because there is no legal or business requirement for MoJ to do so.  There is no MoJ wide Child Protection Policy each business area would consider the need for a specific policy given the context of the work which that area carries out.  The work of the MoJ is vast and diverse and as such one policy would not necessarily encompass the entirety of its business sufficiently and different areas of the MoJ have policies designed to address their unique needs.

If a Judge was a paedophile supporter it would be quite within the bounds of possibility, in fact the very MO of the “security” services that the judge was blackmailed by the deep state, the secret services. He could be put into positions of power to do the bidding of those very services. Indeed the secret services are often accused of running the child abuse networks for this very purpose.

Lord Justice Fulford, is now a Lord Justice of Appeal and as of 1 January 2016, is the Senior Presiding Judge for England and Wales. He was also appointed as the Investigatory Powers Commissioner for a 3-year term on 3 March 2017 [10]

Fulford’s job is to “authorise and oversee the use of snooping powers by public authorities” [12].

Some people may still be worried that he is “authorising and overseeing” authorities who could have control over him by blackmail.

Some may be worried that as Senior Presiding Judge for England and Wales, Sir Adrian Fulford has not been publicly exonerated of being free of any sinister influence over him in the public positions he holds.

Is it right that a Judicial Report about the links to paedophile and child abusing groups, of a man who is Investigatory Powers Commissioner and the Senior Presiding Judge for England and Wales, is kept secret?

Shame on the murky Judicial Conduct Investigations Office and MOJ.

The Judicial Conduct Investigations Office  – a body that is supposed to investigate complaints into the judiciary.

Brian had a couple of chats with his friend Adrian, perhaps at the urinals down at the club. Adrian replied. Brian told John and Chris who were in the bar, that there was nothing to it.  Squeaky clean old boy, squeaky clean. It was all dressed up as legit, titles added, committee names, hyperbole, as per, so on and so forth. Jobs a good un.

John, Chris, Brian and Adrian all know Andy. Its in the interest of national security, after all.

Apparently so is raping children….

If its not, then the Report of the Inquiry into Sir Adrian Fulford must be published.

The Senior Presiding Judge for England and Wales is a member of the Court of Appeal appointed by the Lord Chief Justice.  ie Adrian Fulford was appointed by John Thomas. John Thomas who is one of the guys who has dismissed all complaints against Adrian Fulford and agreed that there is no evidence to support allegations of misconduct.

Hold on. The guy who appointed him and therefore has a vested interest in finding that he did not appoint a dud, and therefore poor judgment, has dismissed all complaints against the guy he chose to appoint! A clear conflict of interest.

The Lord Chancellor is also involved ie Chris Grayling was consulted in the selection of Brian Kerr,  and both Chris and Brian dismissed the allegations against Fulford.

This procedure is not fit for purpose and there should be an independent investigation into Fulford, the due process of the complaint about Fulford and the role of John Thomas and any conflict of interest that he had.

Please note that victims of abuse may be triggered by reading this information. These links are generally UK based.

[10] 2017 Jul 23 Wikipedia Adrian Fulford https://en.wikipedia.org/wiki/Adrian_Fulford archive http://archive.is/ScvPz an official investigation by the Judicial Conduct Investigations Office took place. The investigation, by Lord Kerr of Tonaghmore, concluded on 18 June 2014 that the allegations against Fulford were “without substance” and he “was not and had never been a supporter of PIE or its aims”. Following his exoneration, Fulford resumed sitting as a judge on the full range of appeals.

[A] Sanctuary for the Abused http://abusesanctuary.blogspot.co.uk/2006/07/for-survivors-coping-with-triggers-if.html

[C] One in Four http://www.oneinfour.org.uk/

[K] Survivors UK website for victims and survivors of male rape or the sexual abuse of men https://www.survivorsuk.org/ and twitter https://twitter.com/SurvivorsUK

This is all written in good faith but if there is anything that needs to be corrected or you wish to write to me please email fulfordjul17@cathyfox.33mail.com quoting the article title

“He who does not bellow the truth when he knows the truth makes himself the accomplice of liars and forgers.” Charles Peguy

Every time we act in the face of fear, we dilute it’s power and increase our confidence – via Gary Havener

Only the small secrets need to be protected, the large ones are kept secret by public incredulity – Marshall McLuhan