A man who was jailed for 10 months is still being held in prison more than a decade after being sentenced, under a controversial scheme that was abolished in 2012.

The Imprisonment for Public Protection (IPP) scheme was introduced in 2005 and was designed for high-risk criminals responsible for serious violent and sexual offences.

Under the system, if, at the end of their sentence tariff, the inmate’s ‘danger’ was deemed not to have significantly reduced, they would remain in prison until they had satisfied the Parole Board they could live safely in the community. 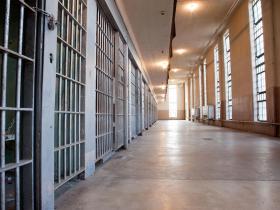 The scheme was scrapped in 2012 by then Justice Secretary Ken Clarke, after it emerged it was being used far more widely than intended and, in some cases, for less serious crimes.

As of September, 3,859 prisoners were still in custody after being sentenced to an IPP and more than eight in 10 were beyond the expiry date of their original “tariff” – the shortest period they were ordered to serve before they could apply for release.
Two in five of the IPP prisoners still behind bars after serving their tariff in March had served at least five years longer than the minimum term. This number included hundreds who were initially given tariffs of less than two years.

James Ward was 19 when he was given a 10-month IPP for arson. Despite repeated attempts to convince the Parole Board he is safe to be released he remains incarcerated today – more than 11 years over his original tariff.
Ward’s sister April Ward told Sky News: “They’ve told James, ‘Just behave, do your courses, go back in front of parole and you’ll be released’, but James did all that, went back to the Parole Board and they said that he needed to do more courses and it’s just a waste of money when he could be at home rebuilding his life.
“He shouldn’t have been given an IPP sentence in the first place because his crime wasn’t significant enough.”

Ms Ward said some the courses the Parole Board had recommended for her brother are “ridiculous and irrelevant” for him.
“Substances courses for instance,” said Ms Ward. “James has never had a problem with any substances, so why would you waste his time?”

She also suggested that the sentencing had caused her brother to suffer mental health problems.
A report released this week said “significant failings” in the prison, probation and parole systems were contributing to the large numbers on inmates still in custody years after the end of their tariff.
It said IPP prisoners have been denied the opportunity to demonstrate whether they present a continuing risk to the public, or to have this properly assessed.

Chief Inspector of Prisons Peter Clarke said it was widely accepted that the implementation of the sentence was “flawed”.
“Some people with IPP sentences remain dangerous and need to be held in prison to protect the public,” he said.

“Others, however, present much lower levels of risks but system failures have impeded their progress.”
Speaking on BBC Radio 4’s Today programme, he called for Justice Secretary Liz Truss to “get a grip” on the problem urgently.
Peter Dawson, director of the Prison Reform Trust, said: “A political decision is needed to cut through the bureaucratic knots that have entangled some prisoners for years.
“We are reaching the limit of what staff on the ground can do to mitigate the injustice faced by people serving this discredited sentence.

“Liz Truss is entitled to feel frustrated at the failure of her predecessors to tackle the IPP’s toxic legacy, but she now has to be the Justice Secretary who does.”

A Ministry of Justice spokesman said: “Public protection remains our key priority. However this report rightly highlights concerns around the management of IPP prisoners.
“That is why we have set up a new unit within the Ministry of Justice to tackle the backlog and are working with the Parole Board to improve the efficiency of the process.”
Additional reporting by Press Association