Maurice notes in 2 recent calls that have been received, dated the 27th and 28th Febuary below [the 3rd and 4th calls  received from him recently] that, with other matters:

a] food on plates is being brought to him in his cell, and now the plates have piled up with the food still on them in his cell – obviously this act is going against Health and Safety rules for starters. Maurice cannot and will not eat any food as it is too painful due to his “torn diaphragm” in his stomach, for which he is denied painkillers, which must be taken immediately prior to the intake of food. Letters to MPs and others regarding this outrageous denial of his prescribed medication apparently do nothing, so far. He also notes:

b] the prison is refusing letters of permission to be sent to Maurice’s supporters and family. Certain officials will only deal with anything if a letter of permission is got for the writer to interact with whichever official written to – hence the blocking of these letters, completely and unnecessarily callous. If one sends a handful of docs. with a letter explaining Maurice’s situation to certain officials all is returned. This, of course, is no reason not to write and complain to anyone in office regarding the completely cruel, atrocious AND ILLEGAL treatment Maurice is having to put up with whilst in HMP Parc, but an example of how things might turn out if one does write.

c] Maurice tells that his legal papers he had in his cell have been confiscated – these docs. used to help his case with the RCJ Appeals office etc.

d] hospital appointments are still being denied, along with his prescribed medication

and a whole lot more, including what seems to be deliberately manufactured confusion over his MAPPA status, as reported in recent posts. He tells that he has been told by 3 seperate prison “officers” and has had it in writing that he is definately a MAPPA Catagory 3 registered individual, and, as reported in a recent post, confused over being  told he is Cat. 3 [very violent, etc.] on one wing, and Cat. O [very much lesser allocation] on another wing, when he has also been told in the recent past that he is not registered with MAPPA at all under any registration! How can any prison be confused over possibly the most serious of registrations an individual can be classed as? [MAPPA stands for Multi Agency Public Protection Arrangements. These are a set of arrangements implemented by the Police, the Probation Service and the Prison Service in order for them to assess and manage the risk posed to the public by particular violent and sexual offenders].   Surely this prison needs to be thoroughly investigated by a neutral unbiased organisation and their multifold errors corrected, especially with so many serious irregularities we’re seeing with Maurice’s bizarre imprisonment where even the most basic of rules are flouted daily, to Maurice’s demise. 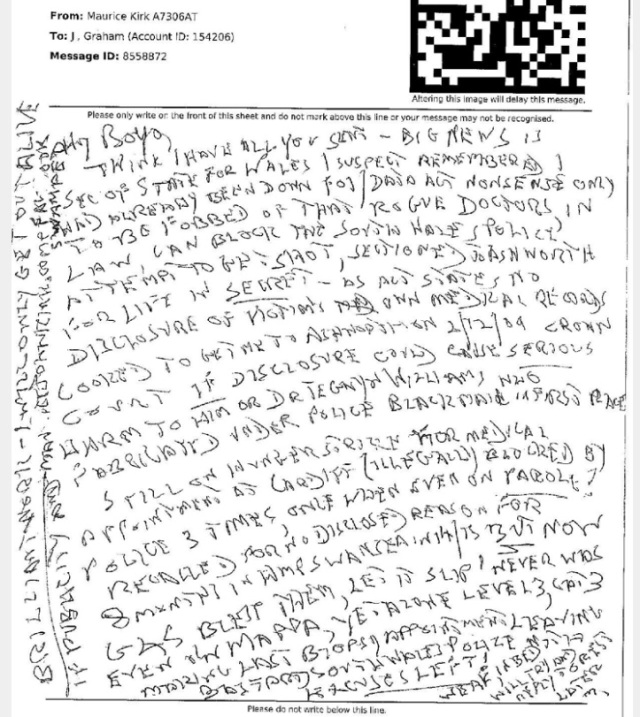 The complaint regarding the falsification of medical evidence, October 2009: 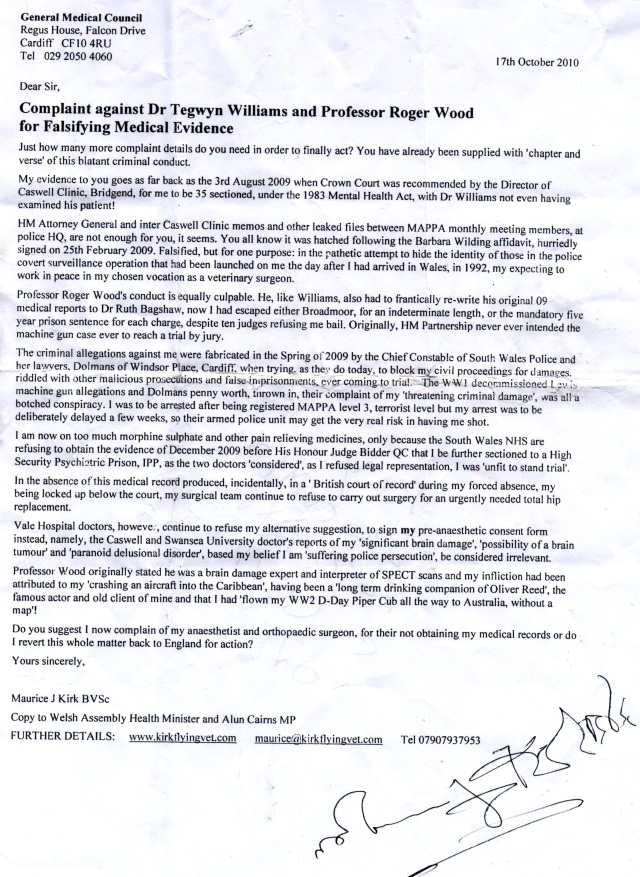 Letter to the Prosecution Service, Wales: 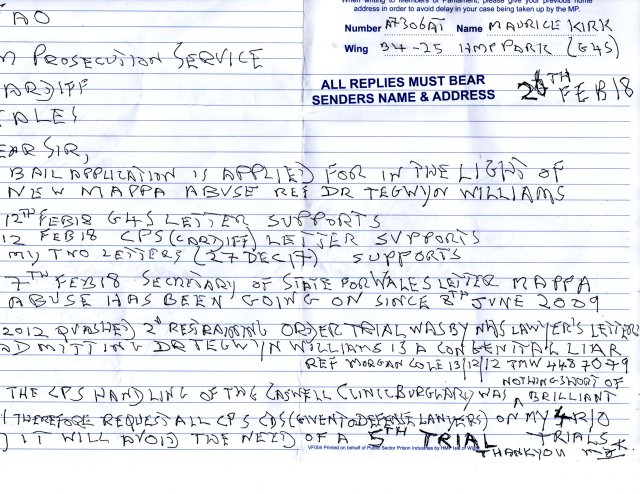 The above video shows the call from 25 Feb. 2018 – the pic in this video is from 2015 weeks after MK was released from HMP Cardiff after serving 16 months in prison [from the end of November 2013 until March 2015] – on the same charges as this time! See all the updates on Maurice Kirk, on hunger strike in HMP Parc, https://butlincat.com/?s=maurice+kirk – serving 2 years imprisonment on extremely dubious and questionable charges relating to him “breaching a restraining order” – an order that was never served in the 1st place!! Maurice has served literally years in prison because of this outrageous discrepancy manufactured by mainly the Welsh police and judiciary – it is a public scandal what has happened over the past 23+ years whereby MK has been blatantly victimised and persecuted by these dubious agencies + authorities.

Received 23 Feb. 2018: From his note, below, Maurice seems to have been given, finally, a laptop he was promised weeks back. This good news was marred by the fact that after spending all day typing up letters etc. to be  sent to the Royal Courts of Justice pending  his appeal, along with other communications to neer-do-wells posing as “solicitors” etc. the screws confiscated the memory stick he’d paid for, full up with the  said notes, at the end of the day. Disgusting. Anything to stop Maurice getting any kind of justice.  [Thinks: if only this were America…]. 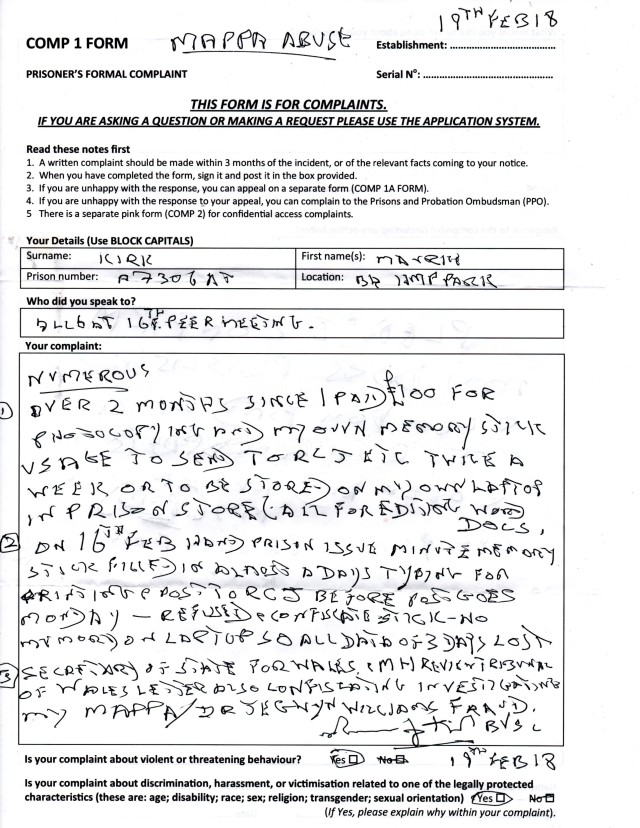 Received from Maurice Kirk 21 Feb. 2018:  Maurice states his medication is being dispensed at inappropriate times – if it is not given directly before the intake of food, it is not worth being given.

He stated in the week that the prison apologised for wrongly classing him as a MAPPA 3 subject – however his urgent hospital appointments are sill denied him, along with the laptop he was promised and paid over £100 for before Christmas, which  also included “printing and posting” items.  Other irregularities continue. 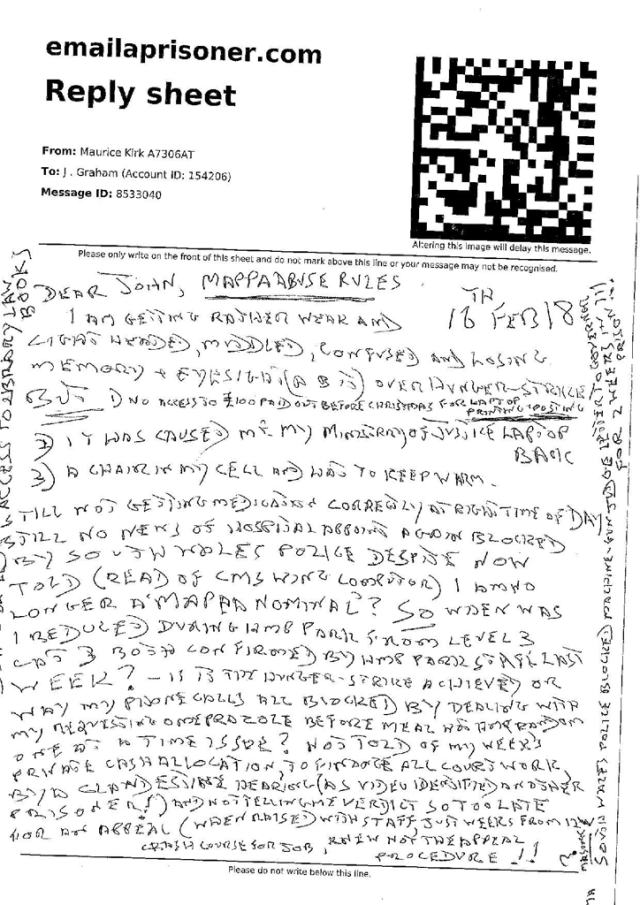 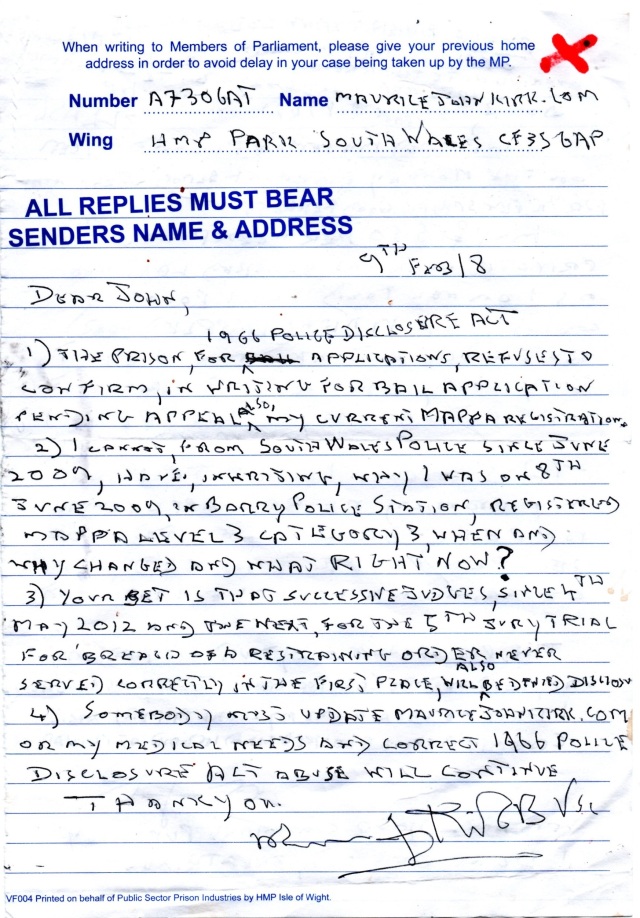 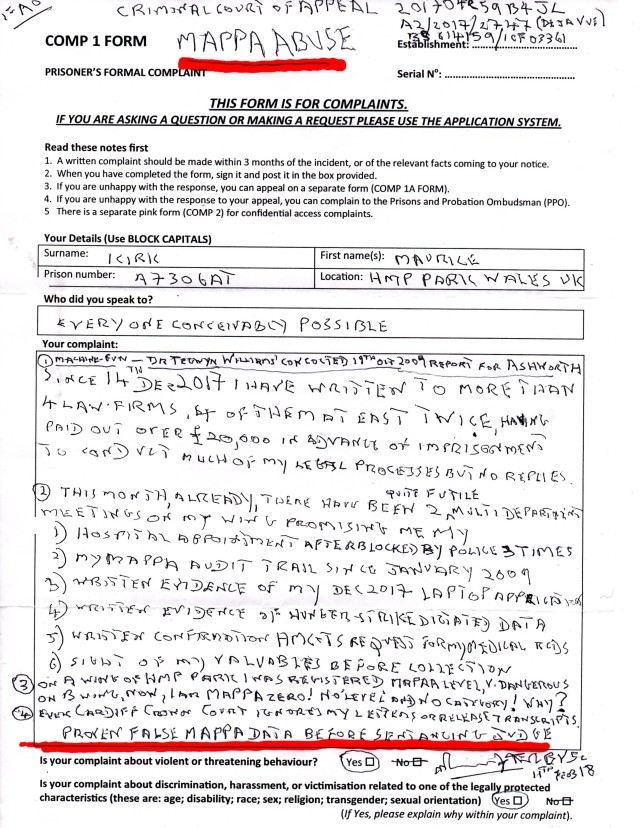 3]   Letters sent that are ignored, since mid-December 2017, the date MK entered this prison – are his letters even leaving the prison? 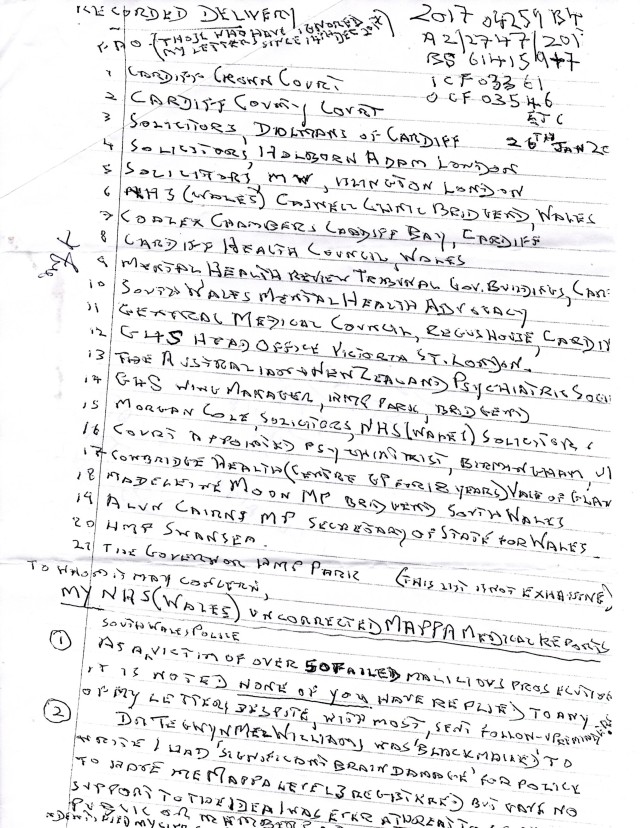 Received 10 Feb. 2018: Maurice writes regarding being denied a laptop he’d been promised but is still denied [along with vital medication and urgent hospital visits] and as the authorities have erred so many times regarding court cases etc., he is even denied access to law books in the library of HMP Parc!!: 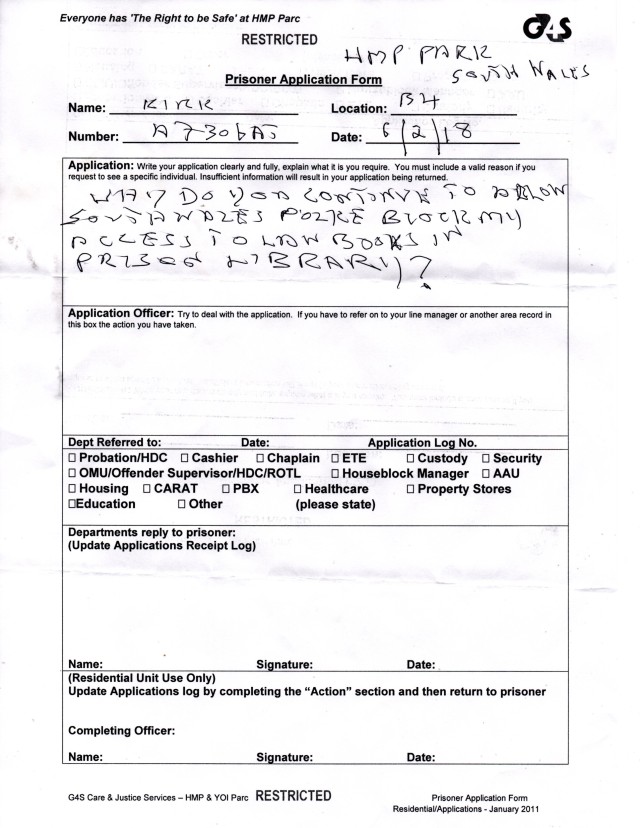 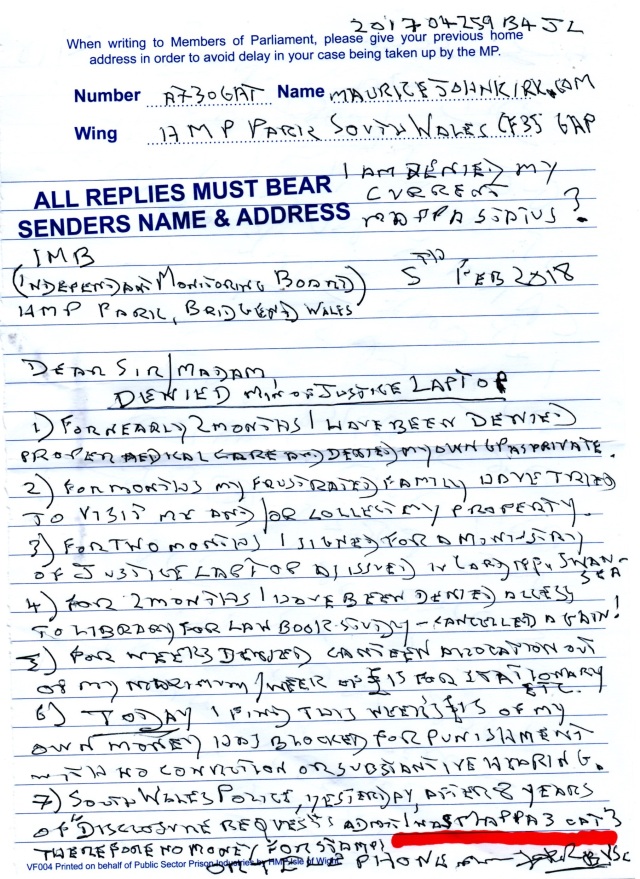 Maurice Kirk, unfairly imprisoned, calls from HMP Parc on 06 Feb. 2018, telling of the appalling treatment he is subject to there. Many authority figures have been notified, with nothing being done. G4S staff this prison. 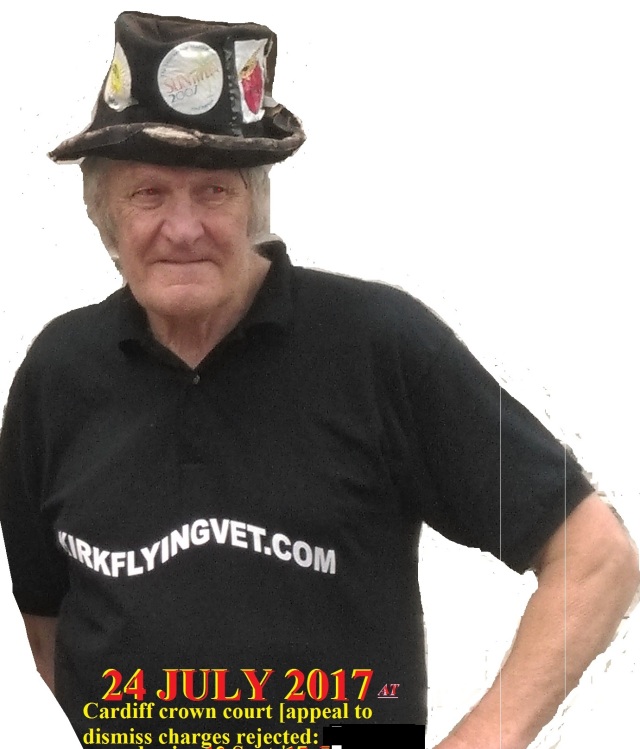