#sackandycoles: Andy Coles: “Peterborough councillor speaks about undercover spy past for the first time after being named by inquiry” Peterborough Telegraph + Jessica on the Sexual Abuse of Spycop Andy Coles VIDEOS + archive

#sackandycoles: Andy Coles: “Peterborough councillor speaks about undercover spy past for the first time after being named by inquiry” Peterborough Telegraph + Jessica on the Sexual Abuse of Spycop Andy Coles VIDEOS + archive

EXCLUSIVE: Peterborough councillor speaks about undercover spy past for the first time after being named by inquiry 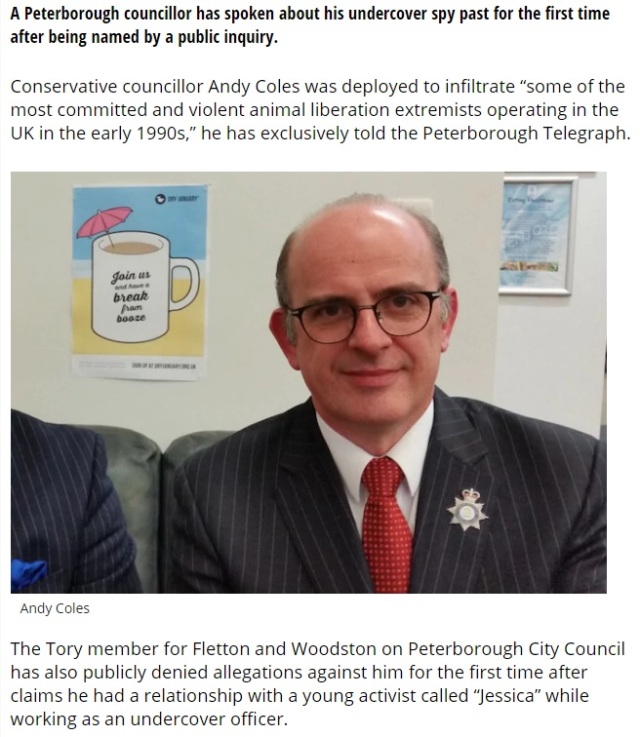 Jessica on the Sexual Abuse of Spycop Andy Coles, September 2017

Whilst an undercover officer in the 1990s in the Special Demonstration Squad, a secret Metrpolitan Police unit that infiltrated political activist groups, Andy Coles groomed Jessica into a sexual relationship. As soon as the truth was exposed in May 2017, Coles resigned as Cambridgeshire’s Deputy Police and Crime Commissioner. He retains other roles of civic trust, notably as a member of Peterborough City Council. On 16 September 2017, Jessica travelled to Peterborough to give this, her first public talk on Coles’ abuse. There is now a dedicated campaign againstr Andy Coles holding positions of public trust https://sackandycoles.wordpress.com/ For more about Jessica, see https://policespiesoutoflives.org.uk/… For more about the spycops scandal, see http://campaignopposingpolicesurveill…

Channel 4 News film on Andy Coles aka Andy “Van” Davy, undercover police officer with the Special Demonstrations Squad, who infiltrated the animal rights movement in the 1990s. Features interviews with “Jessica”, an activist with whom he had a longterm relationship and Paul Gravett from ARspycatcher, who campaigned alongside him and first publicly outed him as a spy in 2013. On 15 May 2017 Coles resigned as Deputy Police and Crime Commissioner for Cambridgeshire. See: https://tinyurl.com/llmygwe

Police were told ‘to have only fleeting and disastrous’ affairs

Undercover police officers investigating animal and environmental activists were told to have ‘fleeting and disastrous’ relationships with them, an inquiry has revealed.An official memo shows that it was deemed acceptable for officers infiltrating their movements during the 1990s to break the law.The findings come after an official inquiry was launched following reports some undercover officers had children with women involved in the protests.The memo, believed to be written by former deputy police and crime commissioner Andy Coles in 2001, was released following the public inquiry.

Advice and instructions on sleeping with the targets, who were dubbed ‘wearies’, was given to officers, reports The Times.Those in Scotland Yard’s Special Demonstration Squad were told ’emotional ties to the opposition’ caused divorce and disciplinary charges.And the report which was released this week added sex could be ‘unavoidable’ but if it was the only option then officers should ‘try to have fleeting and disastrous relationships’.The SDS operated between 1968 and 2008 and was heavily criticised because some officers attached to the unit had sexual relations with some of their targets.The Metropolitan Police has already paid out more than £400,000 in compensation to a woman who had a child fathered by undercover officer Bob Lambert.Meanwhile, in August 2014, four former SDS officers were told they faced no criminal charges for their actions.

The report said: ‘One cannot be involved with a weary in a relationship for any period of time without risking serious consequences.’ The document stated that they could not instigate, counsel or procure other people to commit crimes.However, they ‘should be prepared’ to take advice from supervisors if they were invited to break the law.

Mr Coles was forced to quit in May last year over allegations he groomed a teenage animal rights activist while working undercover.He was alleged to have deceived a 19-year-old woman into forming a sexual relationship while working as an undercover officer in the 1990s.At the time he said: ‘There have been news reports over the weekend about which I am unable to comment.’This coverage is significantly impacting on my ability to carry out my duties as Deputy Police and Crime Commissioner.’I have therefore today tendered my resignation with immediate effect, which Police and Crime Commissioner, Jason Ablewhite, has accepted.’I am aware that the allegations have been referred directly to the Independent Police Complaints Commission (IPCC).’ Mr Coles’ secret past as a spy who targeted political groups was only revealed when his brother – former pop star and broadcaster Reverend Richard Coles – revealed his double life as an undercover police officer in an autobiography published in 2014.

ROGER PEARCE aka THORLEY #spycops + UNDERCOVER COPS: An inquiry just revealed how far the British state will go in its secret war on citizens + OVER 1000 POLICE HAVE CRIMINAL RECORDS + “True Spies” VIDEO https://butlincat.blogspot.co.uk/2018/01/roger-pearce-aka-thorley-spycops.html

UNDERCOVER COPS: An inquiry just revealed how far the British state will go in its secret war on citizens + OVER 1000 POLICE HAVE CRIMINAL RECORDS

“THE FILTH” – what really goes on at Scotland Yard, by an ex-cop 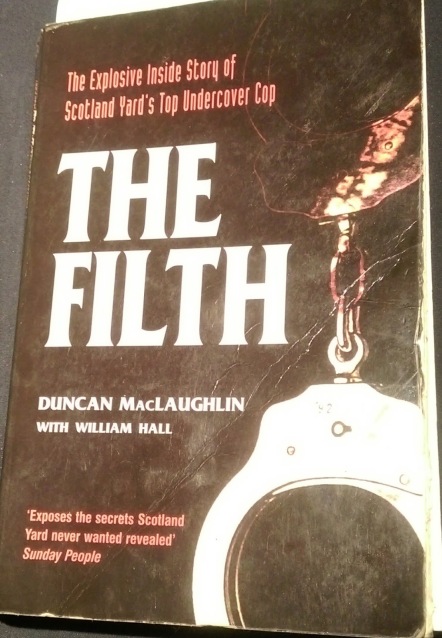