It looks like Maurice’s urgent upcoming hospital appointment has been blocked yet again by these “dark forces” – a real public scandal that these government agencies are 100% responsible for, especially South Wales police and it’s various past + present so-called “chief constables” + their highly questionable connections also playing their deceptive roles accordingly – each and every one “above the law” and allowed to act exactly how they like – law-abiding or not! Regarding the appeal hearing coming  up at the RCJ, the latest docs. received yesterday 20 June ’18 tell that MK is unfit to take part in the hearing anyway due to medical issues [regarding also a newly reported “tooth abcess” occurring] or by video link either, and is seeking an adjournment. Also documents are being refused that M wishes to show at the hearing, as detailed in the notes received, below. Medical treatment, including the preplanned hospital appointments for his  “torn stomach diaphragm” [i.e. “Barrett’s Syndrome”] have been denied Maurice, using various excuses, as well as painkillers being denied also on numerous occasions [at least once using the hilarious excuse that the drugs MK is being prescribed have been “lost” – in a prison! Are they serious? Apparently so!].

Suffice to say that since 2009 Maurice has been forced to spend at least 7 years behind bars – most, if not all of these sentences [or remands in custody also] based on the premise that MK breached a restraining order – a restraining order that was never served upon MK in the first place according to UK law. The gobernment has compounded this irregularity by not only failing to show the original restraining order [that government personnel attempted to serve upon him by forcing it into MK’s sock whilst he was lain prone on the ground outside a prison cell, accompanied by various prison officers in 2009], but also has manufactured  more than one “variation” of this [alleged] original order. How can a “variation” of an order be legal if the original cannot be shown, or, more importantly was never served according to UK law on Maurice in the first place? The order relating to MK being restricted regarding contact etc. with the doctor who left the NHS after manufacturing a report that MK had a “brain tumour” and was therefore unfit to be in society due to the ailment’s implications and therefore MK should be removed from society for the good of all and be placed in a closed mental unit, such as Ashworth or Broadmoor forever. This report was found to be completely without merit as official medical tests and brain scans later proved that Mk had no tumour – those reports taking years – and a hunger strike – to get.

The bottom line is:  having to serve at least 7 years out of 9  in a hellhole prison [with even basic medical care denied 99% of the time] as has happened since 2009 to Maurice [perhaps to interfere with his 40 odd cases against the S. Wales police etc.] is a horrific  torture to bestow on anyone especially if the restraining order in question wasn’t served properly on it’s prospective recipient the first place. Of course, the justification for the numerous sentences inflicted upon Maurice is easily lost in the convoluted and highly dubious waffle excreted by these wayward government departments who cannot be seen publicly to have ever made any kind of mistake, particularly when a citizen’s very freedom is taken away for literally years on end under the most questionable of circumstances as happened to Maurice, and not only since 2009 either – those very agencies needing to go ridiculously over-the-top when defending actions committed by them, even those actions that are bona fide and guaranteed 100% crimes. There are more than enough citizens who can verify this shameful situation, it must be stated, also. 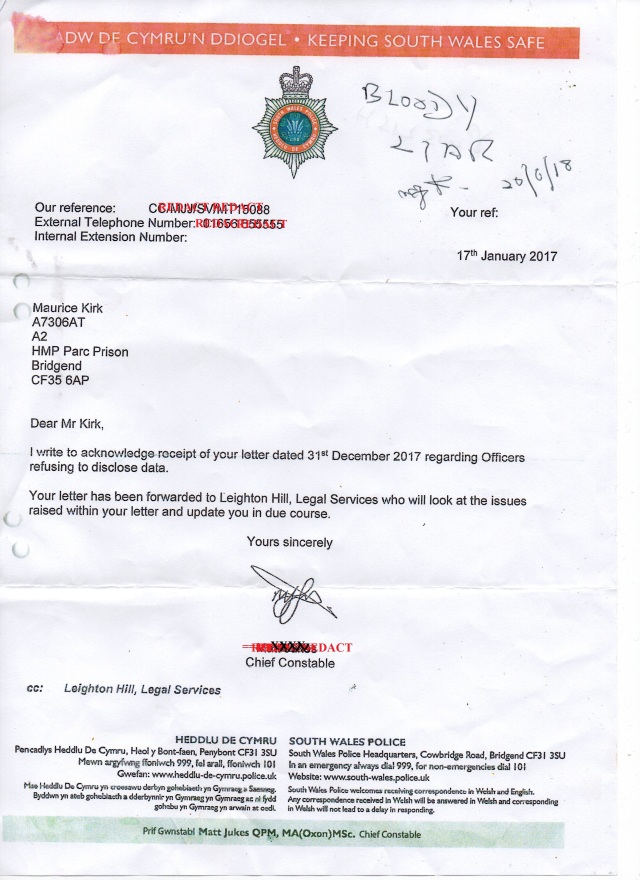 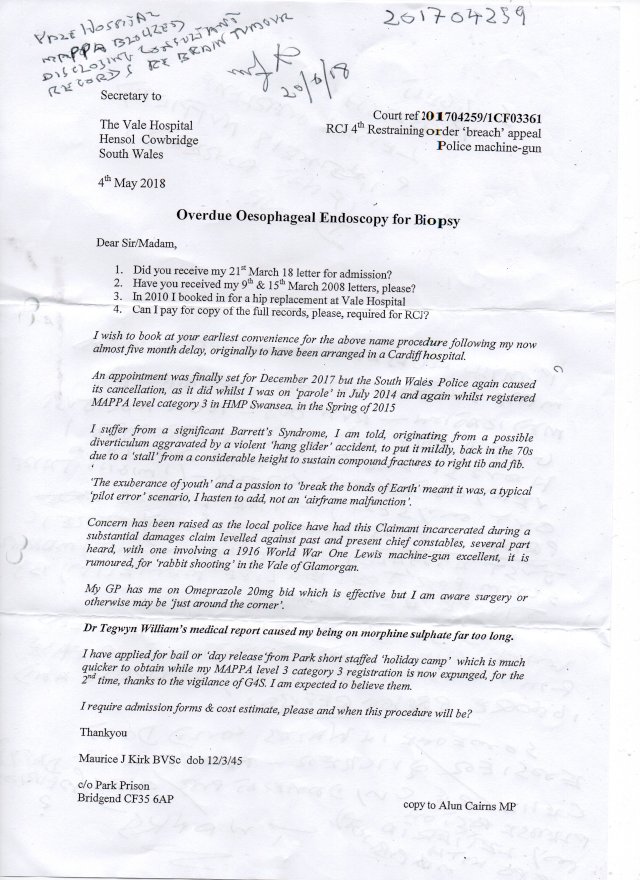 Maurice Kirk, 73, has an appeal hearing coming  up at the RCJ, but the latest docs. received today tell that he is unfit to take part in the hearing due to medical issues [regarding also a newly reported “tooth abcess” … Continue reading →

Received: some of what’s behind the outrageous persecution of Maurice Kirk, 73: “MAPPA – the Machine Gun Conspiracy” [which failed miserably with MK being acquitted at trial] eg. how a now ex-NHS consultant was tasked to make it appear MK … Continue reading →

Received on the 6th, dated the 4th, but not seen until today 9th June 2018: It seems M’s denial of hospital appointment days ago has been put down, according to this latest 4 June message from him just seen, to … Continue reading →

disgraceful: WILL THIS BE ANOTHER UNLAWFUL DEATH IN CUSTODY? – MAURICE KIRK CALL FROM HMP PARC 07 JUNE 2018 The horrific treatment of Maurice Kirk continues, with him being denied urgent hospital treatment for a “torn stomach diaphragm” – vital … Continue reading →

The shocking and often illegal mistreatment of Maurice Kirk continues in HMP Parc, Bridgend, Wales, such as prescribed medication for a serious stomach ailment being denied, hospital treatment also being denied [“5 MONTHS SINCE POLICE BLOCKED MY ENDOSCOPY”] and even … Continue reading →