Maurice Kirk: hunger strike continues but progress is being made, thanks to Mr. Cairns? One hopes… 31 Aug. 2018 + archive

Received – thankfully the 2 notes received are much more heartening than those received on the 24 August [post below], stating amongst other things that an endoscopy / colonoscopy investigation has been promised, but M states he is staying on hunger strike until things are confirmed properly. Also he states he is off any “medications in possession” restriction [the restriction being where a convict is barred from being allowed to have medications given to him by the prison kept in his cell or on his person [in case his cell is burgled by another con]] – the medication to be taken as and when needed, eg. directly before food in MK’s case, which is all well and fine that MK is on no such restriction IF they dispense the medications to him in the first place – which they aren’t, hence his remaining on “hunger strike” as a result of this appalling [and illegal] misuse of the prison system, along with other irregularities. See the Ministry of Justice letters at the foot of this page where the MoJ have the audacity to declare that prisoners, as NHS patients or clients “get the best possible NHS treatment” whilst in HMP, when the truth sadly shows that they most definitely don’t, as this sentence alone proves, for instance, along with the other 7 years-worth of sentences served since 2009 which are also testimony to profound irregularities regarding medical treatment not forthcoming that no one does anything about, as they should, at the time or after.

Other positive progress is contained within the notes [if one can find and read them, but I’m sure they’re there] and perhaps thanks are to be credited to the Welsh Secretary Mr. Alun Cairns, Maurice’s former MP who has known Maurice for many years, who [maybe] acted upon certain criticisms aimed his way recently because of the absolute break down of not only Maurice’s basic human rights to receive proper medical treatment whilst in HMP Parc, but also in other departments where travesties are / were taking place for so long eg. hospital visits ignored when Maurice most needed them. So, we’re not out of the woods by a long chalk, but if any progress has been made that Maurice speaks of a big “thank you” to Mr. Cairns is surely in order, and I for one apologise for my venomous tone in recent communications, brought about by the utter frustration of little changing for now 8 and a half months since M’s entry into HMP Parc where even the simplest of medical treatment has been denied 95% of the time by these G4S prison staff. I mean, would anyone in their right mind let any animal suffer as Maurice has for over 8 months? Having said that, Maurice states he’s “bed bound” because of his present medical situation, so let’s hope that rare praise for Mr. Cairns isn’t misplaced and Maurice continues to find himself in a better and more acceptable position, which, let’s face it, should’ve been happening from Day One, let us not forget, and let us not forget also that Maurice shouldn’t even be where he is if the law had been dispensed properly, Her Honour Judge Tracy Lloyd Clarke, because “having knowledge of a restraining order” [which I heard said with my own ears at a hearing directly before Maurice’s sentencing hearing] is very different to a restraining order being served on someone properly and according to the law, which the original order most definately wasn’t – the same as this very same order couldn’t be shown to a jury who asked to see it many moons ago. Something is very wrong somewhere… 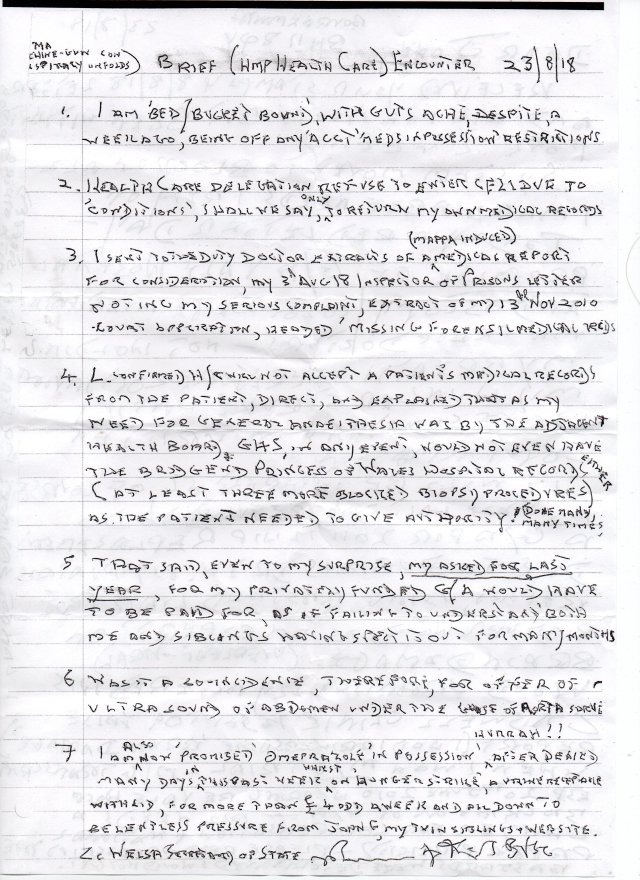 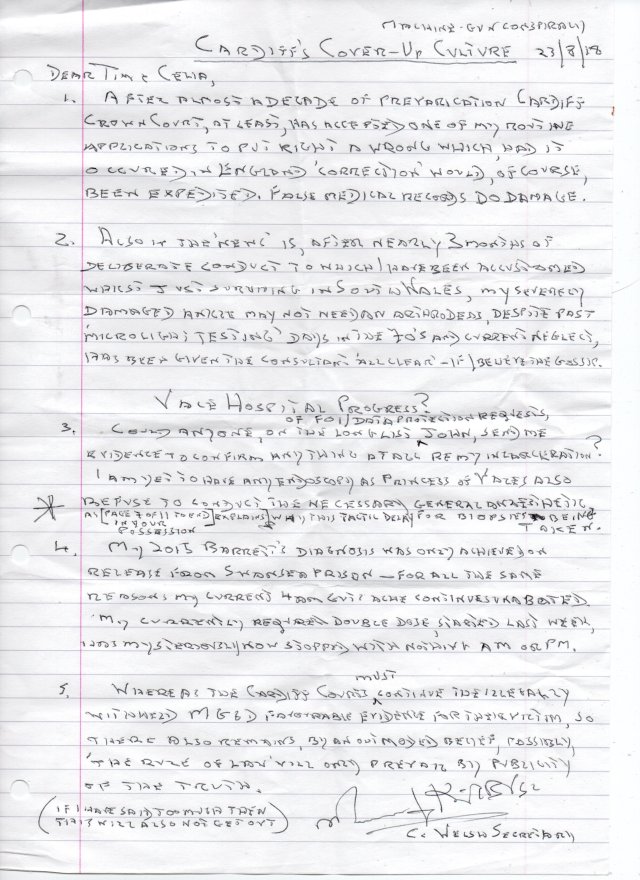 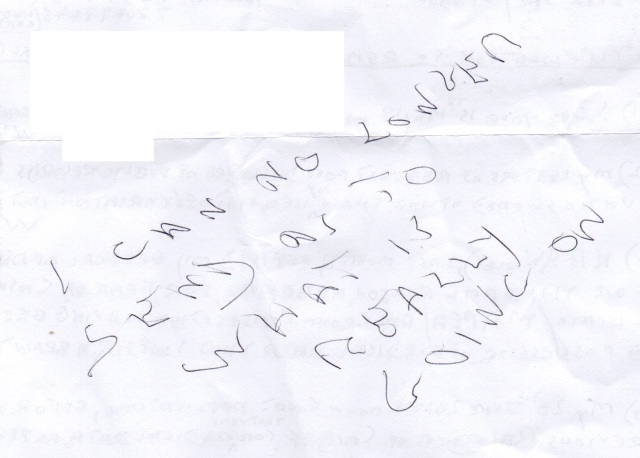 Received:  Maurice, 73, states he is again on hunger strike because of the denial of the prison staff to dispense him the medication he has every right to receive – for months now. Note phone calls to family members along with calls to supporters are also denied for Maurice, as well as urgent hospital appointments for debilitating stomach ailments. The relevant medical records the hospital staff need to see regarding any medical procedure urgently needed can be undertaken are also denied – a blatant abuse of MK’s human rights and a public scandal!  Note MK also writes: “I CAN NO LONGER SEND AS TO WHAT IS REALLY GOING ON” – with threats of violence towards him by morons serving sentences in this place  one can hardly imagine the dire situation MK is in now, with no authority caring one jot what happens to MK or what goes on in this private gulag of a prison. His supposed release date of 1 August is now apparently abandoned due to a prison system completely out of control. Someone must surely answer for this outrageously unacceptable situation…

1]  note re: being on hunger strike

1]  note re: being on hunger strike 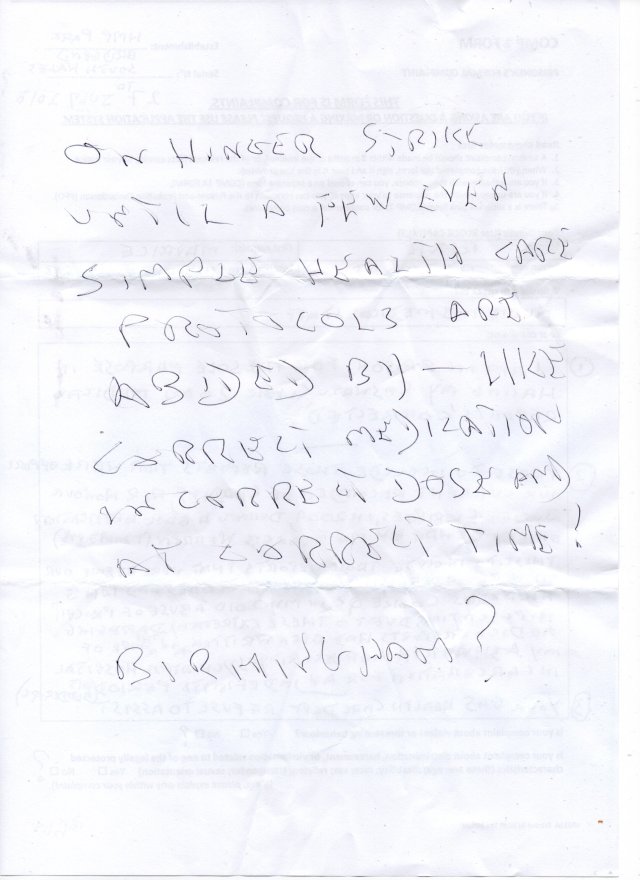 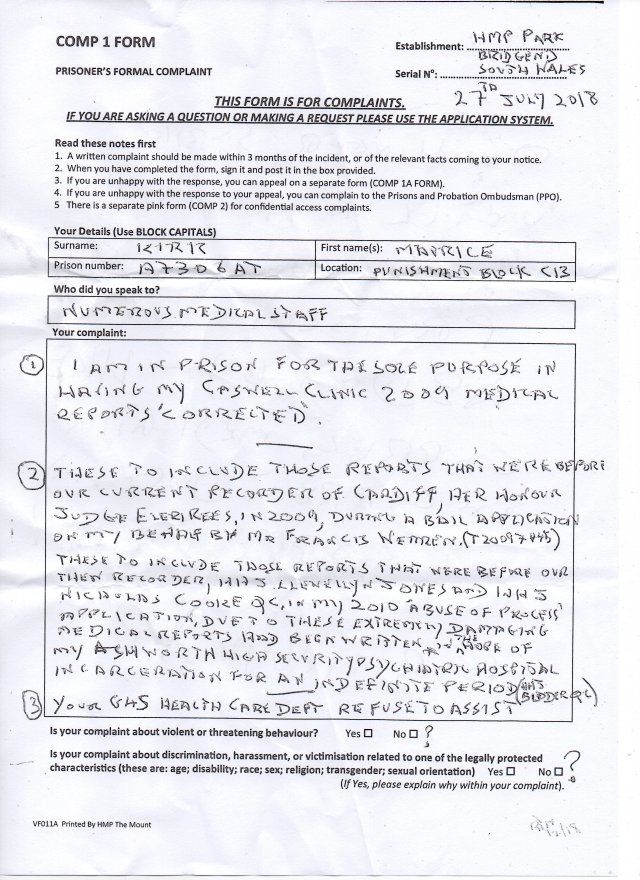 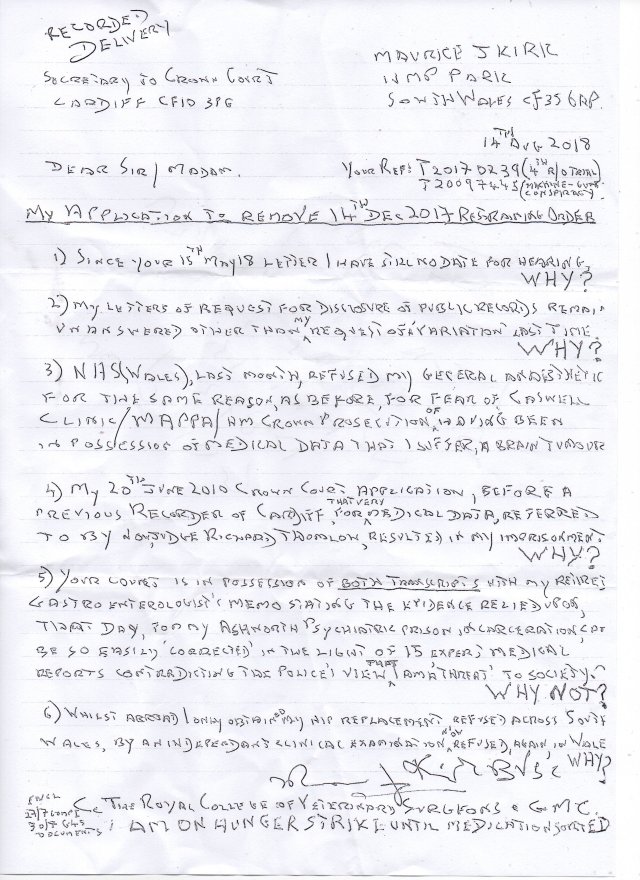 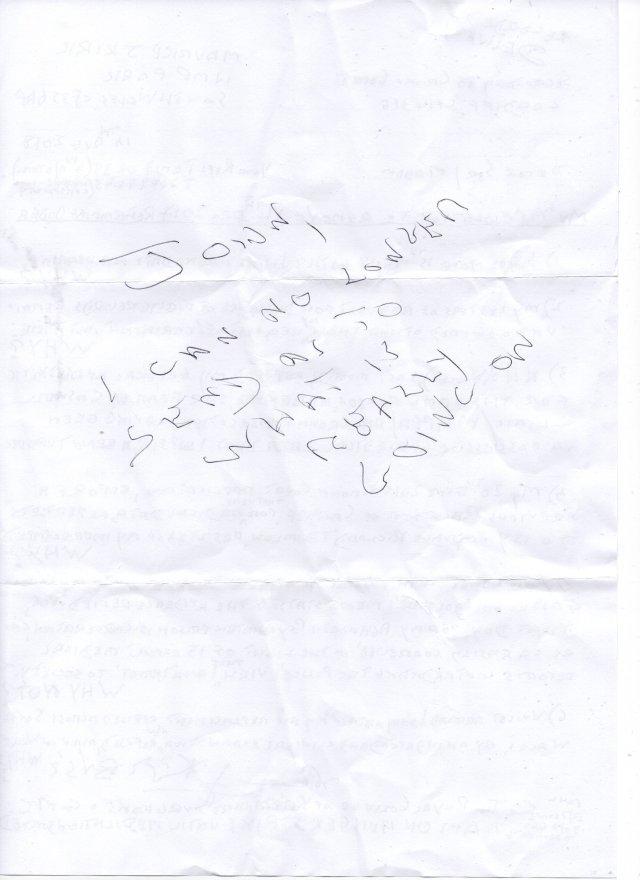 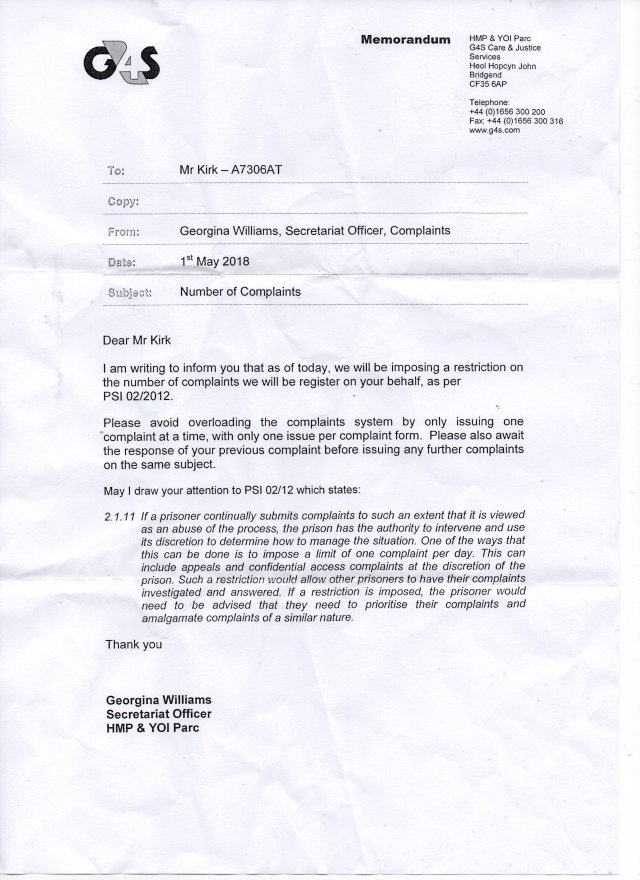 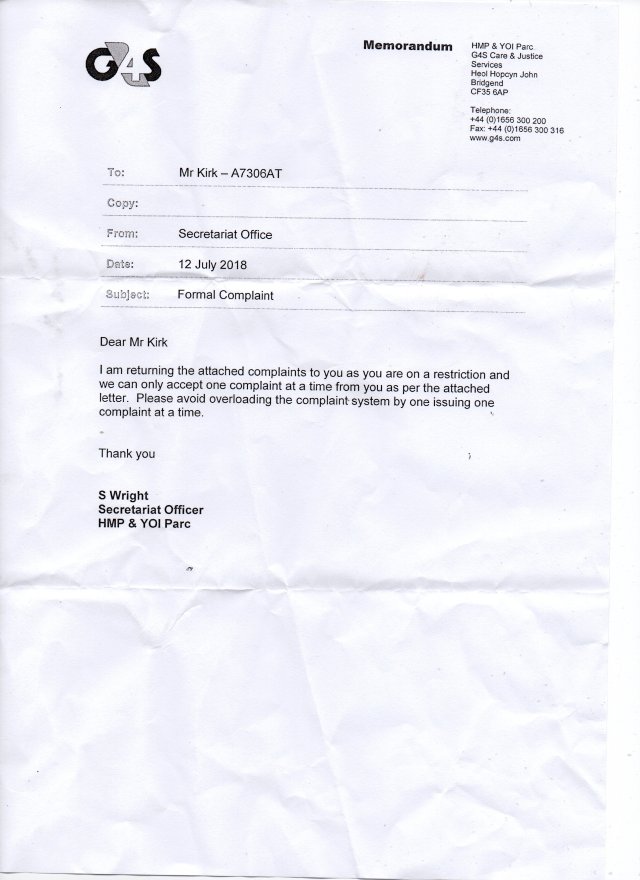 These letters below, from the MoJ in 2013, with statements completely contradicting what actually goes on in these “prisons”. Maurice, now 73, has been denied medical treatment, including treatment for a probable broken ankle, a tooth abscess and also “Barrett’s Syndrome” for months now – his medication being denied for most of the 6 months he’s been in HMP Parc: 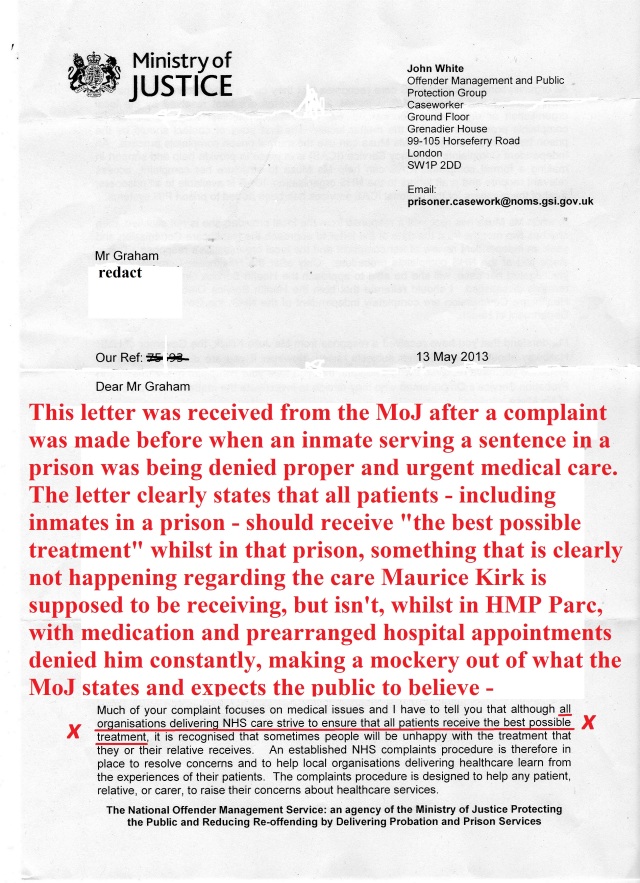 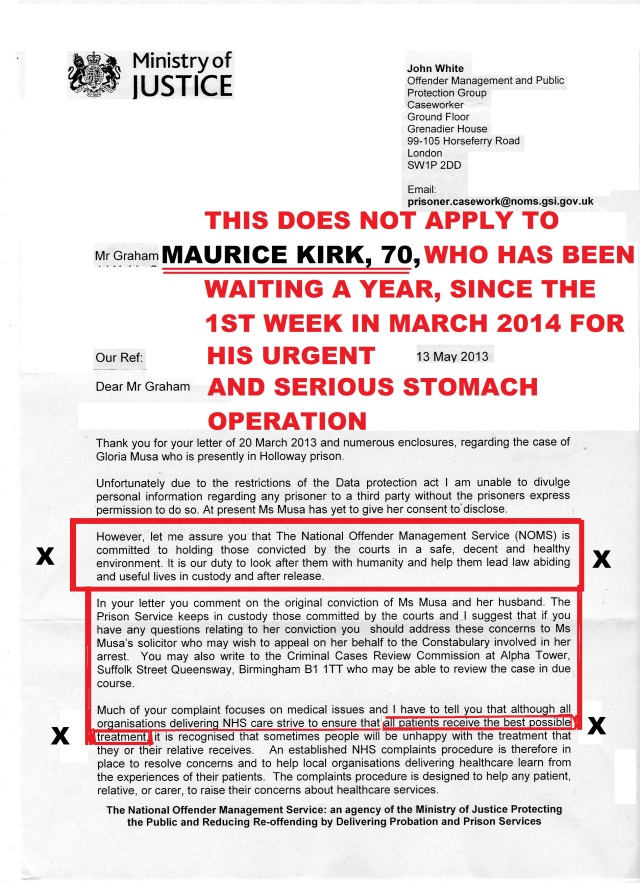 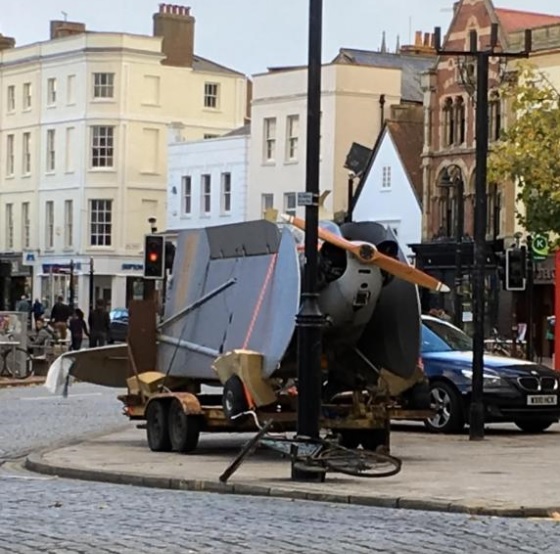 above:  16 Oct. 2016, arrested for driving irregularities transporting a plane from A to B [the plane wasn’t secured well enough or something] – nothing transpired after…

3 Responses to Maurice Kirk: hunger strike continues but progress is being made, thanks to Mr. Cairns? One hopes… 31 Aug. 2018 + archive