Received: Shockingly, an attempt by the authorities to section Maurice to a lunatic asylum failed miserably during the past few days, probably because he is quite sane and doesn’t need such convoluted attempts to make his persecution even more miserable than it already is. Maurice is in great pain constantly because this prison regime at HMP Parc refuse follow the laws of the land and let him have the hospital appointments in place, or private medical treatment, or give him the long-prescribed medication – Omerzaparole – that he is perfectly entitled to and was receiving before he entered this den of inequity. One might think the Welsh Secretary Mr. Alun Cairns MP, who has known Maurice a long time, as well as being his MP at times might actually do what he is paid to do and see to it that the laws of that land apply to Maurice and let him get the proper medical treatment he so badly needs and is perfectly entitled to which the authorities claim is there for clients that need it – and no one needs medical treatment more desperately then Maurice at the moment – but no, Mr. Cairns lets the debacle of Maurice’s medical situation fester and worsen despite being  in a position of such high authority as the Welsh Secretary who should be able to get things done – if not Maurice’s dire medical situation then surely the totally fake medical report from the Welsh Caswell Clinic could be  corrected, this totally false report originally manufactured by neer-do-wells such the a] former consultant doctor, head of Caswell Clinic [who left the NHS not long after Maurice’s acquittal at the trial which the report was concocted for way back in 2009 to section Maurice to a closed mental unit – Ashworth] and b] a certain police force – the South Wales police force – who are all involved in their respective lack of responsibilities by stopping Maurice’s parole this time round which should have begun on the 1st August, along with MAPPA. These, what can only be described as totally corrupt agencies are letting a confusing and totally false situation regarding Maurice’s MAPPA status run and run without the badly needed corrections happening that  false reports would normally receive so more restrictions and persecutions can be heaped upon Maurice – the denial of Maurice’s parole, and the illegal denial of hospital treatment being 2 examples of serious malfeasance affecting Maurice’s life to a very large degree because these dubious agencies refuse to do their jobs properly and correct what needs correcting. And Mr. Cairns, the Welsh Secretary himself, doesn’t help either. Why is that? This insane situation has been ongoing since Maurice entered this hellhole in mid-December last year.

Are they trying to kill Maurice by denying him the medical treatment he so badly needs yet is so illegally denied for 10 months? The answer can only be “yes” – by their own actions! 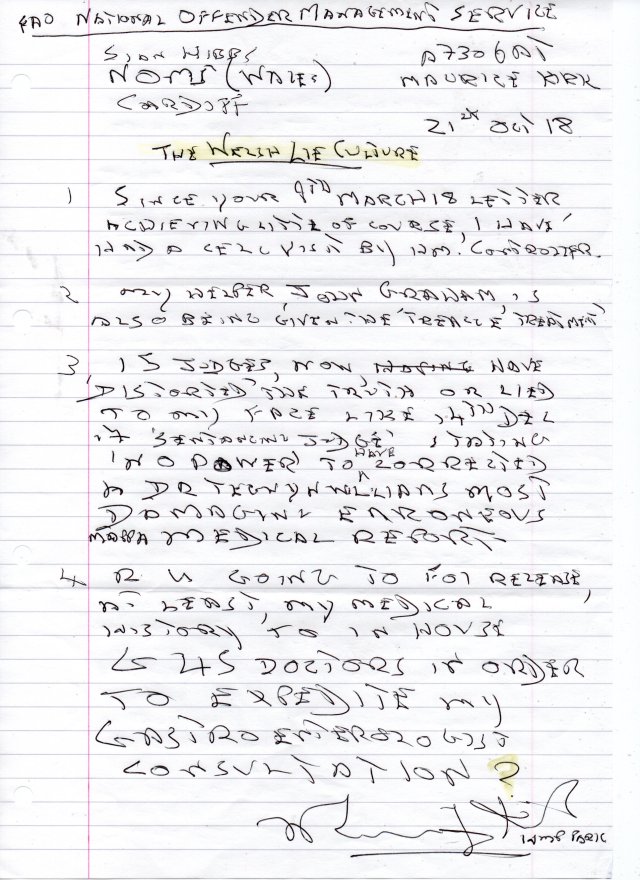