This, below, from a major UK tabloid is sadly lacking so much of the true facts regarding the entire Hampstead SRA [Satanic Ritual Abuse] case which began to be reported publicly during 2015, before going viral with many arrests [n.b.: but none of the alleged perps] and remands in custody [eg. S. Mcneil has been on remand since 09 Dec. 2017]…and a family destroyed.    See the interviews with the family in the archives, below:

By DARREN BOYLE FOR MAILONLINE

A pensioner, described as an ‘online troll of the worst kind’, made the lives of innocent families a misery as she accused parents of satanic abuse, a court heard.

Sabine McNeill, 74, allegedly directed a campaign to uncover claims of devil worship and child abuse at a primary school in Hampstead, northwest London.

Miranda Moore, prosecuting, said she harassed four mothers, who cannot be named, from 2014 until earlier this year.

She said: ‘This relates to four totally innocent women who have had their lives turned completely upside down by this defendant.’

McNeill published ‘scandalous satanic child abuse accusations’ and encouraged people ‘to take direct action against the children of these women.’

She allegedly published details of the cult, saying: ‘They would drink the blood of babies and then dance around wearing the skulls on parts of their bodies.

‘They would put them to sleep by injecting them, slit their throats, cook the babies and eat them.’

McNeill even claimed babies were cooked in a secret room in a McDonald’s restaurant on Finchley Road: ‘The ritual is performed on an upstairs room in McDonald’s on Mondays and Fridays.

‘Sacrifice, blood drinking and babies’ flesh eating occurs on Saturdays. The children are frequently injected and put to sleep, apparently the school nurse is the one who does the injections.

McNeill claimed up to 18 teachers from the primary school were also involved in abusing children.

She said members of the cult – from all walks of society – carried out satanic rituals in secret rooms at a Hampstead church.

‘These allegations surround two small children, commonly referred to as P and Q.’

She said police initially took the complaints seriously and interviewed the children. 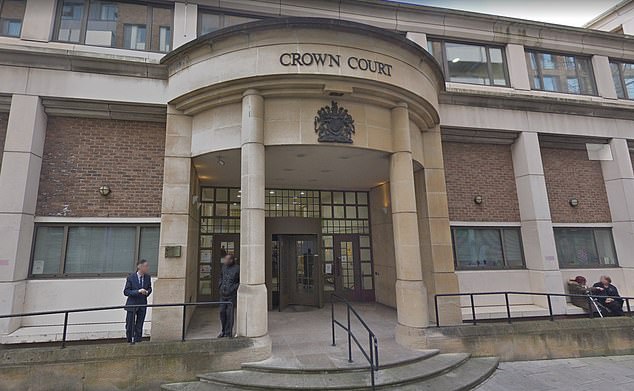 The matter eventually reached the High Court and Mrs Justice Pauffley ruled that the accusations relating to the cult were ‘baseless.’

But recordings of the children’s police interviews surfaced online and McNeill began her campaign to uncover the alleged cult, said Ms Moore.

Jurors heard one parent was forced to install a panic alarm and another was approached by a paedophile online looking to sleep with her child, ‘making her physically sick.’

Describing how McNeill directed the campaign, Ms Moore added: ‘She said online that members of the public should paint dolls of the Barbie variety with red nail polish and send them to business owners in the Hampstead area.

‘She contributed to the GoFundMe account of Rupert Quaintance. He is an American gentleman who was able to read online about the abuse and he decided to come over to the UK and cause problems. She even offered him a bed when he got here.’

Quaintance was arrested after posting a picture of himself outside the school claiming he had a knife, the court heard.

He was subsequently charged and convicted of harassment.

McNeill was involved in a protest at the church in March 2015 and subsequently arrested.

She was later cleared of plotting to intimidate a vicar and his parishioners after a trial at Blackfriars Crown Court, but handed a retraining order to stop her harassing the parents involved.

‘Having been told not to publish these false allegations, particularly about the school and the church, and having been before the courts on a few occasions she changes method,’ said Ms Moore.

‘She goes to what I will call the analogue method.

‘She attends the General Synod who were having a meeting to deal with the Church of England’s approach to child abuse.

‘She attends the meeting and gives out leaflets. Ms McNiell was again arrested for doing that.

‘She is an online troll of the worst kind, making the lives of innocent families a misery.’

McNeill from Camden, denies four counts of harassment and 17 counts of breaching a restraining order.

Received: 09 Dec. 17: “Sabine Mcneil, remanded to Bronzefield Prison. Hopefully by Monday the bail will be met and we can get her out. “. She next appears at Southwark Crown Court on 5th January. She has been charged with further … Continue reading →

HAMPSTEAD SRA – sort the truth out of this email – there isn’t much!! “More evidence that Hampstead is an MK Ultra psy op” – 20 Nov. 17

What a crock!  Abraham and Ella asked Mckenzie and Mcneil [of the dubious “charity donations” fame]  to “cease and desist” paying any attention to their case ages ago – what did they do? they did the OPPOSITE and ignored Abraham’s and Ella’s … Continue reading →

HAMPSTEAD SRA: Interview:ELLA GAREEVA, THE MOTHER OF THE HAMPSTEAD CHILDREN – VIDEO + “Anatomy of A Coverup” 29 MAY 17 + archive

Hampstead Cover Up to Pizzagate. Mother’s statement and appeal to the public. 03.08.2017.  Free The Hampstead 2 Published on 9 Mar 2017 The ‘Free The Hampstead 2’ campaign is dedicated to securing the freedom of Alisa and Gabriel, the courageous … Continue reading →

by Emily Love | Feb 6, 2017 The story of an American journalist who has been held in the United Kingdom for the last five months while police investigate his Facebook post, gained traction after a video surfaced online on Feb. … Continue reading →

29 Feb.2016: “Whilst Americans and some Europeans deal with the challenges faced by survivors and the families of Ritual Abuse and Trauma Based Mind Control.  The U.K. and other European Governments engaged in Mind Control programs (involving the ritual sacrifice … Continue reading →

HAMPSTEAD COVER UP: 22 Dec. ’15 ELLA DRAPER / ABRAHAM CHRISTIE – ED OPPERMAN REPORT   After that interview, this from Ella + Abraham: “We have been aware of David Shurter as a cointel disinfo shill for a while.http://www.dysgenics.com/tag/lying-fraud/ This was … Continue reading →

HAMPSTEAD SRA: IN WHAT LANGUAGE IS THE GIRL SHOUTING? IS IT ITALIAN? ANCIENT LATIN? ARAMAIC?

Can anyone help please? Hampstead Cover Up The Church Cottage What is the Girl Shouting Out ? Guidance 2222  Published on 12 Sep 2015 Hampstead C.C. what is the girl shouting ? Hampstead Cover-up Update + The State of Pederasty in … Continue reading →