Received: the prison staff’s malfeasance and worse continues unchecked, as usual, with Recorded Delivery letters to the Appeal court at the Royal Courts of Justice and other mail being handed back to him by the prison staff 3 weeks after he tried to send them [as an earlier update from MK declared]. Isn’t it an offence to interfere with the “Queen’s mail” – or has privatisation trivialised that right too? Answers, please, on a postcard.  I recall an old acquaintance some time ago robbed a bag full of Royal Mail waiting to be delivered from a train parked up at a train depot – he got years in jail for his actions – a very serious offence…at the time… 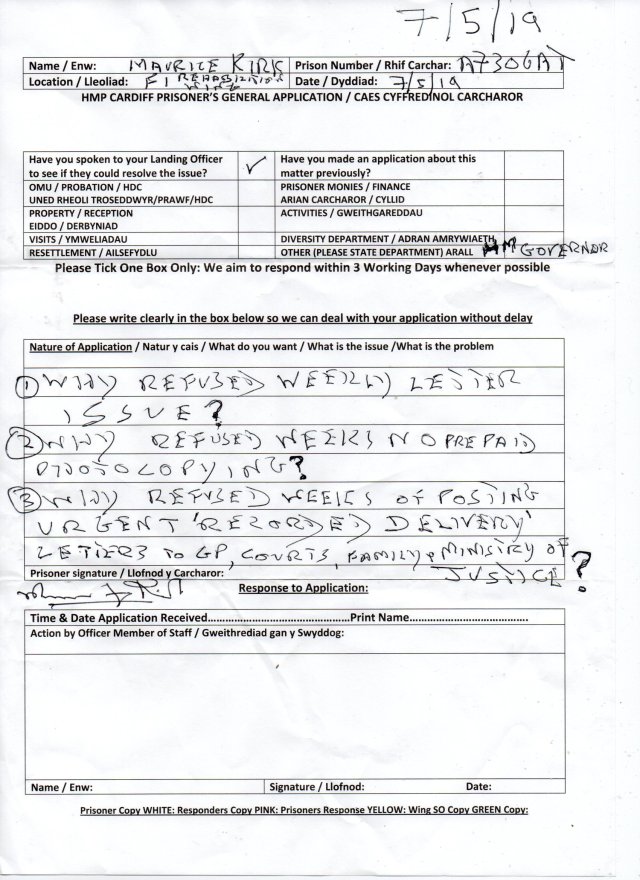 Maurice Kirk: false convictions are refused to be removed from legal history, letters blocked to RCJ still + more – 06 May 2019 + archive

Received – Maurice writes today that the false charges put in his probation history are being refused to be removed by the S Wales police – since when can the police just add fake convictions to anyone’s legal history? No one stands a chance if things like this are done by those we call the “police”, which make a mockery of everything the “law” stands for. Note there are over a hundred errors in the 42 pages of MK’s probation history, Maurice writes in an earlier update. What is serious about these false additions to Maurice’s legal history is that he has been made a MAPPA subject as a result, which stops much justice from taking place, and allows much persecution and victimisation to take place, as has been happening to Maurice for years, eg. with prison sentences being given when they shouldn’t have been – the judge’s verdicts based on a completely fake history  – a history containing false convictions which don’t exist in the first place, which any judge would frown upon when giving a sentence, believing the fake history to be real.

Apart from that, his recorded delivery letters have now been blocked and disallowed completely from leaving the prison, as he tells us below, including letters to the Appeal court at the Royal Courts of Justice. This is probably because when their lordships receive the letters and realise that many of the charges on Maurice’s history are fake, and which make him a MAPPA subject too, he will be released from prison as the imprisonments, including the latest too, are based upon a manufactured legal history that isn’t real. Thus, everything is being done by the prison to stop such letters getting to the Appeal Court. Even photocopying documents  has now been stopped from happening, and even stamps are not allowed that are sent to him by supporters.

Received:  notes showing how deep the corruption surrounding Maurice Kirk, 74, and the targeting goes. They all defend each other to the point of absurdity, but someone always makes a mistake which shows even more the inherent corruption of the S. Wales police and their connected parties, including their misplaced “leader” – the Ch.Con, who is walking on extremely thin ice now, as are others = 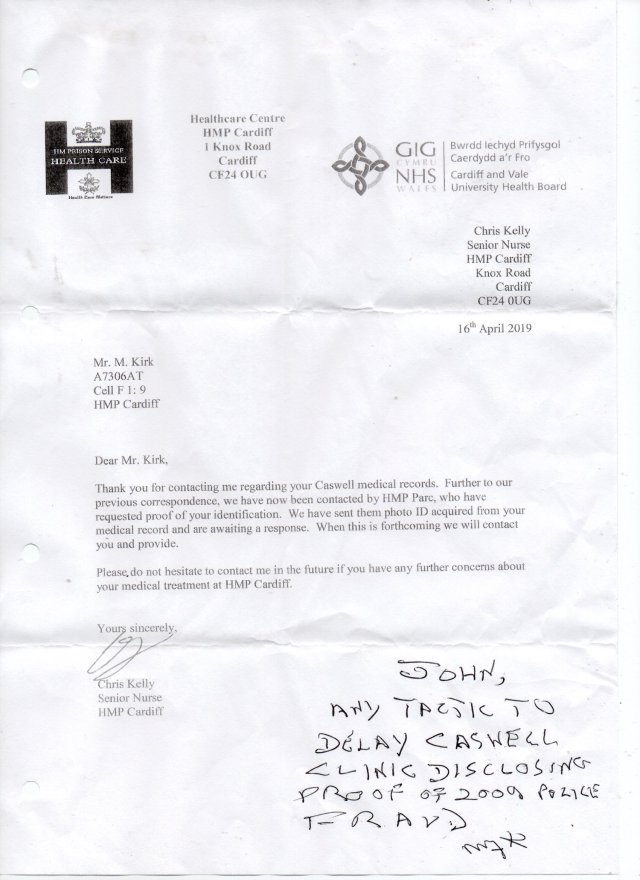 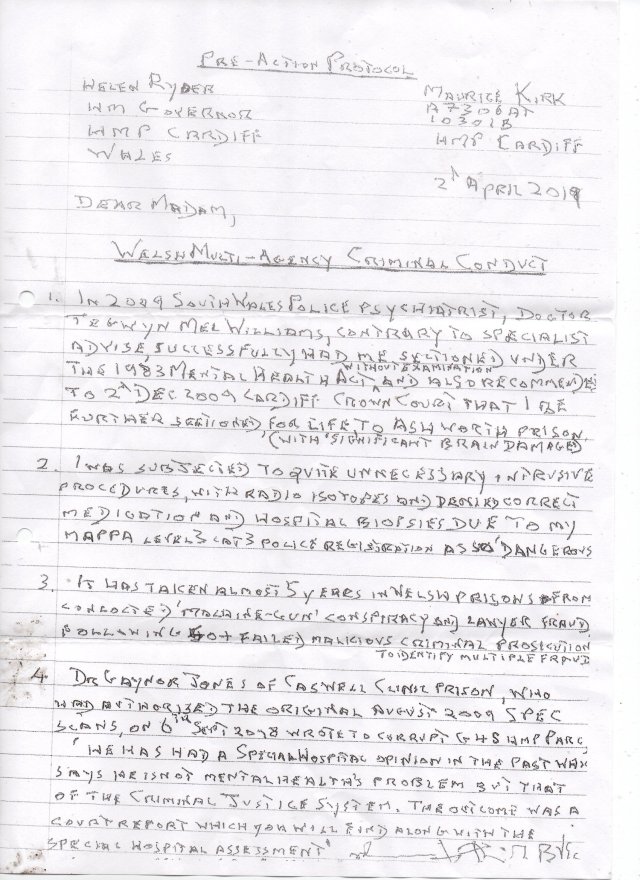 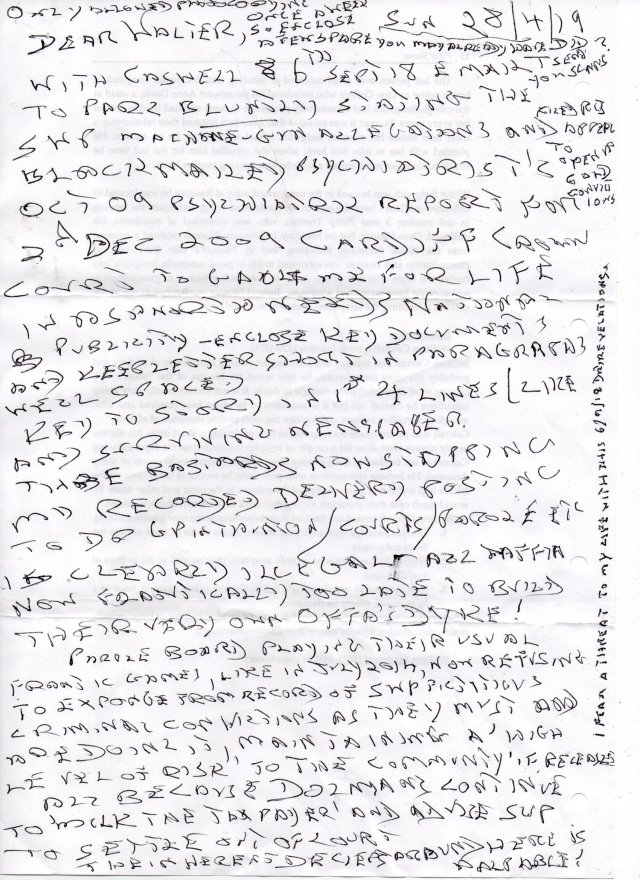 Just the latest dishonest action by these corrupt prison employees – on orders from whom?

Received:  the latest from Maurice, received from emailaprisoner, tells the usual tale of the general corruption surrounding Maurice Kirk’s quest for a level playing field to counter the appalling and shocking malfeasance and blatant corruption we have come to expect from certain, especially Welsh authorities. The latest is that Maurice’s recorded delivery letters are refused to be sent to the Royal Courts of Justice and other places, using the flimsiest of excuses given by particularly deceitful “prison warders”, as there is a glimmer of hope that when his documents are seen by these characters sent to in high places, some of whom have at least some integrity and honesty, the chances are that these upstanding officials will do what they are supposed to do – see that the law is upheld – so it stands to reason that if the prison can destroy Maurice’s chances of letters getting to these locations in the first place, they can keep him locked away – and tortured until further notice. Whoever is drunk with power who is pulling the strings regarding the outrageous targeting Maurice forever experiences needs to realise that he is possessed by something very evil that the majority of good folk everywhere thankfully aren’t. Various irregularities are in play by the prison to stop Maurice’s letters from leaving the prison [or even being received by him from supporters etc], and just as outrageous is that when one rightly complains to authorities about these corrupt practices, or one informs Mr. Cairns, the Welsh Secretary or the Welsh Assembly also of this blatant deceit ONE IS COMPLETELY IGNORED!  How these characters are able to sleep at night beats me, torturing a 74 year old man whose only “crime” [for want of a better word] is to stand up for his rights and fight the blatant deceitful corruption against him which began over a score of years ago. One might do well to remember that those who have been dispensing this abhorrent torture over the years to this now elderly citizen – and I’m emphasising particularly about the endless prison sentences meted out to him connected to his past conviction history which has been severely tampered with by the adding to it of various serious charges that don’t even exist that Maurice was supposed to have committed – might like to take note that all concerned may not get away with any of their deceitful crimes they’ve been part of, as karma has a way of seeing to it that those guilty parties suffer much worse than those they inflicted their torture against in the first place. The old saying “What goes around, comes around” is a very apt statement which comes to mind, because no one gets away with everything forever, and any one of these characters involved in Maurice’s cases where massive deceit is involved would throw his / her own mother under the bus if they had to, to save their own skin. Sadly, none of this can undo what’s already been done, and nothing can give Maurice back the many years he’s spent pointlessly [and often very ill] in prison or anything else he’s lost because of these evil deceitful characters put in positions of authority they most certainly shouldn’t even be allowed to go even remotely near, but that just shows how easily they can get away with serious crime – be they a judge, or whoever they think they are. All their accolades and titles mean jack sh-t at the end of the day, when it comes to the crunch, but, of course, they’re so wrapped up in their own bs they haven’t a clue what’s going on – nor do they care. Let them reap what they sew.

Below, Maurice explains how the prison staff refused to process his recorded delivery mail to the RCJ and elsewhere. It nauseates me how anyone – paid by the taxpayer – can weild so much misplaced power, but there we go. In 2009, and connected to the “Machine gun trial” frame-up, regarding which Maurice was acquitted when they tried – and failed – to remove Maurice from society forever to a closed mental hospital by the fabrication that he had irrepairable “brain damage” and was a “danger to society and himself”, Maurice writes:  “Hunger strike released my probation officer’s OASys’s lies and string of serious criminal convictions and this prison, in writing,  inadvertently disclosed Caswell Clinic now denies I ever had “brain damage” or mental health disorder in 2009 – just who is on the run?” Fyi – “Caswell Clinic” was run by the dishonest consultant who “left” the NHS after colluding [allegedly] with the Welsh police to have Maurice sectioned forever in a closed mental unit using lies. It all came on top, and this dubious character was left to manufacture false stories in order that a “restraining order” was put upon Maurice – or, rather, wasn’t – as that “restraining order” was never served upon Maurice according to the law in the first place and couldn’t even be shown to a jury when they asked to see it, even though authorities make out the order was properly served, and punish Maurice with long prison sentences when they claim he has broken it – total evil. These outrageous miscarriages of justice and abuses of power have been ongoing for years, as regular supporters of MK will all be well aware of. 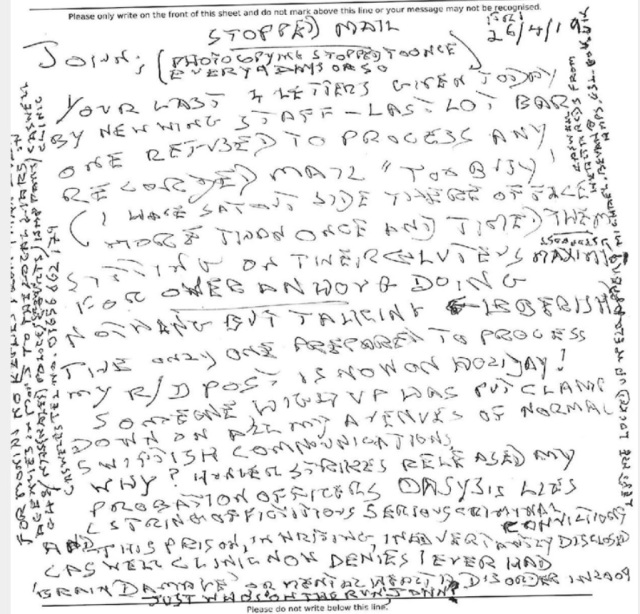 Maurice states that as well as his being denied letters being sent out, he is also deliberately restricted photocopying, as well as “proof of posting” for letters that do eventually get sent  – “proof of posting” is a requirement by the courts or they have a field day ignoring everything. He also states that a convict stood at his cell door was “goading” him about the postal receipts he’s being denied constantly AND WAS ACTUALLY HOLDING PREVIOUS RECEIPTS FOR LETTERS MAURICE HAD SENT THAT HE IS DENIED!! How did a con get these receipts that should’ve been given to Maurice, as a legal requirement? Whichever prison officer was involved in this criminal activity needs to be slung out of that prison and got rid of asap!!  Maurice also states that the only prison officer who would help him with his recorded delivery mail “has gone on holiday” – so more problems there with the other useless eaters parading as screws. These oafs would be dangerous if they had a brain.

The endless complicit deceit and conspiracy by the HMP Cardiff prison staff [with others] not to let Maurice’s appeal and bail application documents get to the authorities – anywhere. They stink!

Maurice Kirk phone call – why is he made a MAPPA subject again? 25 APRIL 2019 + archive

Maurice Kirk phone call – why is he made a MAPPA subject again? 24 APRIL 2019 What is MAPPA? With MAPPA the authorities can inflict extremely debilitating and serious restrictions and rules and regulations upon the subject – this registering … Continue reading →

Received today 21/04/19: Updated and added are the charges Maurice finds completely without merit, as shown directly underneath his latest message. Maurice states in his message received a couple of hours ago regarding the petty punishments now meted out to … Continue reading →

Maurice Kirk, still on hunger strike in HMP – his mail to authorities undelivered and returned to him weeks later – 20 April 2019 It is a public scandal how Maurice has had nothing at all done regarding at least … Continue reading →

MAY I please urge friends + supporters of Maurice,74, to please complain to the governor of this hellhole HMP Cardiff asap regarding this utter hostile victimisation of Maurice – he is again on hunger strike and now he’s denied appeal or … Continue reading →

Received:  RIDICULOUS – Maurice is now told to write himself to “Caswell Clinic” for his medical records [they know he’s done that many times], withheld by many agencies who refuse to give them to him although he is perfectly entitled … Continue reading →

Maurice calls a family member 15 April ’19. After being released on parole around 18 December 2018, and after serving 12 months, and forced to live in a MAPPA bail hostel in Cardiff where he had to “sign on” at … Continue reading →

Received: Other new docs received from Maurice, a formal complaint sent to NHS Wales regarding the malfeasance and other irregularities regarding the failure to provide Maurice with medical records that he is perfectly entitled to. They are withholding certain records … Continue reading →

Received:  this note, written on the back of a completely shredded brown envelope, which was inside a Royal Mail clear “apologies as to the state of this letter” polythene bag, explains the latest from Maurice, which is selfexplanatory.  More later, … Continue reading →