#FreeAssange: Protest Call Out! Thursday 22/10/20 at 12 noon The Guardian’s Role in the Persecution and Prosecution of Julian Assange + #Twitterstorm! 21 Oct. 2020

Protest Call Out! Thursday 22/10/20 at 12 noon The Guardian’s Role in the Persecution and Prosecution of Julian #Assange

Please join us in calling out The Guardian for its role in the persecution and prosecution of Julian Assange publisher of WikiLeaks on 22/10/20, on the day of the 10th Anniversary of the Iraq War Logs. We shall hold a small peaceful socially distancing demonstration in accordance to our covid risk assessment. We’ll wave banners, posters, distribute flyers, read out satements of support and give speeches take videos and later on go flyering in the vicinity. Here is a copy of our  Guardian leaflet Oct 2020 front (1) and Guardian leaflet Oct 2020 back (1) if you wish to download and distribute in your neighbourhood of place of work. It’s written by JADC’s Maxine Walker. read it below!

Julian Assange is responsible for publishing the most massive and important leaks of US government documents showing the reality of its (and UK/NATO partners) wars in Afghanistan and Iraq.  These 2010 leaks created a tidal wave of disgust at the revelations of war crimes, corruption, torture, rendition and death squads. The US/UK were determined to annihilate Assange and ensure that such exposure would never happen again.

Consequently, today Julian Assange, a journalist and publisher, sits, silenced in Belmarsh Maximum Security prison, awaiting a ruling on his extradition to the USA on charges of espionage carrying a 175-year sentence. He is a victim of years of ‘arbitrary detention’ and psychological torture according to UN organisations and experts.

A journalist and publisher charged with espionage for publishing the truth? Surely you would expect other journalists – seeing the danger to honest journalism – to rally to his defense. Especially the Guardian which claims to stand for liberal values and benefited greatly by collaborating with Assange and WikiLeaks on publishing the Afghan and Iraq material.

Think Again. They did the Opposite.

The oh so liberal Guardian has in fact taken the lead media role for the past 8 years in smearing, lying about and ridiculing Julian Assange. More than any other media outlet, it has shaped and weaponised mainstream liberal opinion into an Anti-Assange lobby.  By doing this the Guardian has given enormous support to a massively well-resourced US/UK campaign to ‘Get Assange’ and has helped to pave the way for his imprisonment in the USA.

The Guardian has ignored repeated violations of his human and legal rights.  They have shown not a flicker of curiosity about his prison conditions (effectively solitary confinement); his psychological torture; his court cases (he appears in court in a glass box as though a dangerous prisoner)  or about US intelligence agencies extraordinary and illegal surveillance of Assange (24-hour video and audio recordings of his meetings with lawyers, doctors, journalists etc)  in the Ecuadorian Embassy. Instead they have waged warfare against Julian Assange.

The following is a  just a small proportion of the Guardians gutter journalism: In 2015 the UN Working Group Arbitrary Detention (a body of eminent lawyers and experts) ruled that Julian Assange had been arbitrarily detained since 2012, a ruling made against enormous pressure from the US and UK governments. The Guardian’s Marina Hyde (who later called Assange “the biggest arsehole in Knightsbridge”) taking the Government line wrote:” I don’t want to go out on too much of a limb here, but my sense is that the finest legal minds are not drawn to UN panels as a career path. … Perhaps UN panellists are like UN goodwill ambassadors, and even Geri Halliwell could be one. …” She was happy to torch not only  Assange’s rights but also the last hope of those illegally detained by repressive governments.

After the Ecuadorian and UK governments illegally breached Assange’s asylum and dragged him out Ecuadorian Embassy in 2019, the Guardian’s Hadley Freeman wrote mockingly: “I love stories about badly behaved houseguests and Julian Assange has raised the bar” followed by her recycling of the most insulting and unfounded insults about his behaviour.

In 2018 Luke Harding and other Guardian writers began a concerted campaign to link Assange with the Kremlin. Offering no evidence whatsoever, Harding and others simply increasingly referred to his ‘ties to the Kremlin.”  Kathleen Hall Jamieson asserted that “it now clearer than ever” that “the Russian cyber-theft” of thousands of Democratic Party emails was “abetted by Assange’s WikiLeaks”  Harding and others wrote the fictional: ‘Revealed: Russia’s secret plan to help Julian Assange escape from UK.’  Finally, Harding invented an entire episode in which he claimed that former Trump campaign manager Paul Manafort had held three secret talks with Assange in the Ecuadorian Embassy.  This was strenuously denied by all and, given that the Embassy was amongst the most surveilled building in London, evidence would have existed. Any functional journalist would have known these stories were intelligence plants designed, as we now see, as part of the softening up process for Julian Assange’s 2019 ejection from the Embassy and current Extradition proceedings against him.

Most recently the Guardian has barely covered his Extradition hearing at the Old Bailey nor the enormous threat to press freedom represented by his case. They covered Jonny Depp’s court case more.

The US Extradition case against Assange is wholly politically motivated but the US Prosecutors have to pretend crimes have been committed by Julian Assange. One of their accusations is that Assange risked lives and caused harm by failing to redact names.  At the Old Bailey they repeatedly quoted from a book about WikiLeaks authored by Guardian journalists, David Leigh and Luke Harding which claims that Assange was recklessly indifferent to the safety of US informants named in leaked files. This not true. Serious journalists who had worked with Assange on the leaks testified at the Old Bailey that Assange was scrupulous about risk minimisation and redaction.  The Leigh/Harding book also, unforgivably revealed a complex password entrusted to Leigh by Assange that provided access to an online cache of unredacted documents.  Assange is now in the dock for this and still the Guardian continues to lie.

If a plane takes off from the UK with Assange shackled on board destined for life in a US supermax prison – the Guardian will bear a large part of the blame. 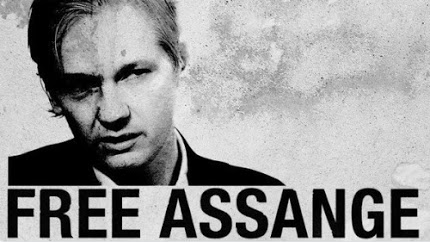