The partner of WikiLeaks founder Julian Assange has described his ongoing incarceration in one of England’s highest security prisons as “intolerable and grotesque”.

Despite winning his long-running extradition battle in January against the US, Assange remains in HMP Belmarsh in south London pending the outcome of an appeal.

Assange is still wanted in the US on an 18-count indictment, facing allegations of plotting to hack computers and conspiracy to obtain and disclose national defence information. 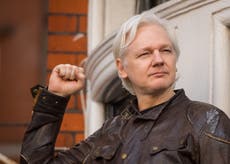 Judge Vanessa Baraitser ruled Assange should not be extradited to the US on mental health grounds due to his suicide risk.

But she refused to release the 49-year-old while US prosecutors appeal the decision over fears he would abscond.

Ms Moris’s visit to the prison coincides with the date Assange sought diplomatic protection from the Ecuadorian Embassy in 2012 to avoid extradition to Sweden on sex offence charges which have since been dropped.

Assange and Ms Moris first met when she joined his legal team while he was in the Ecuadorian Embassy to help him fight the extradition process to Sweden and later to the US.

Ms Moris said: “He was happy to see the kids, but he’s suffering. You know it’s a grim, horrible place.”

When asked about Assange’s mental health, Ms Moris said: “The situation is utterly intolerable and grotesque, and it can’t go on.“You know he’s been in there for two years and going on to two-and-a-half years. Today is actually the nine-year anniversary of him going into the Ecuadorian Embassy.”

She added: “The situation is just getting more and more oppressive.”

Ms Moris said she “hoped” that they would remain in the UK if the US prosecutors’ appeal was blocked. “At least he will be safe here. I just want to be where Julian is safe.”

She said that she and Assange’s lawyers were hopeful that there is less of an appetite to prosecute him in the US following Joe Biden’s election victory.

“The Biden administration is showing signs of wanting to project a commitment to the first amendment,” Mr Moris said.

“The only logical step for (Mr Biden) to take would be to drop this entire prosecution, and I hope that cooler heads prevail than under the Trump/Pompeo/Barr administration.”

“Having Julian locked up and facing extradition degrades the UK, and it is a threat to press freedom in the UK,” she said.

“(The UK authorities) need to look at this situation afresh and bring it to an end, because it’s gone on for too long, and Julian’s life is at risk.”

Ms Moris added: “They’re driving him to deep depression and into despair.”

She continued: “It’s not safe for him at all, he should be at home with his family.

“And, you know the prison guards know it, the prisoners know it, everyone tells him: ‘You shouldn’t be here.’

“And the UK Government knows it. This is intolerable and it has to be brought to an end.”

Ms Morris said Assange was “struggling”, but added: “He has his family to come back to.”

Announcing her decision to deny bail in January, Judge Baraitser said: “As a matter of fairness, the US must be allowed to challenge my decision, and if Mr Assange absconds during this process they will lose the opportunity to do so.

“Mr Assange still has a huge support network available to him should he again choose to go to ground.”

Lawyers for Assange have said he now only wishes for a “sheltered life” with his family.